Yogi Adityanath: The Chosen One

Why Modi wanted the Mahant as Chief Minister 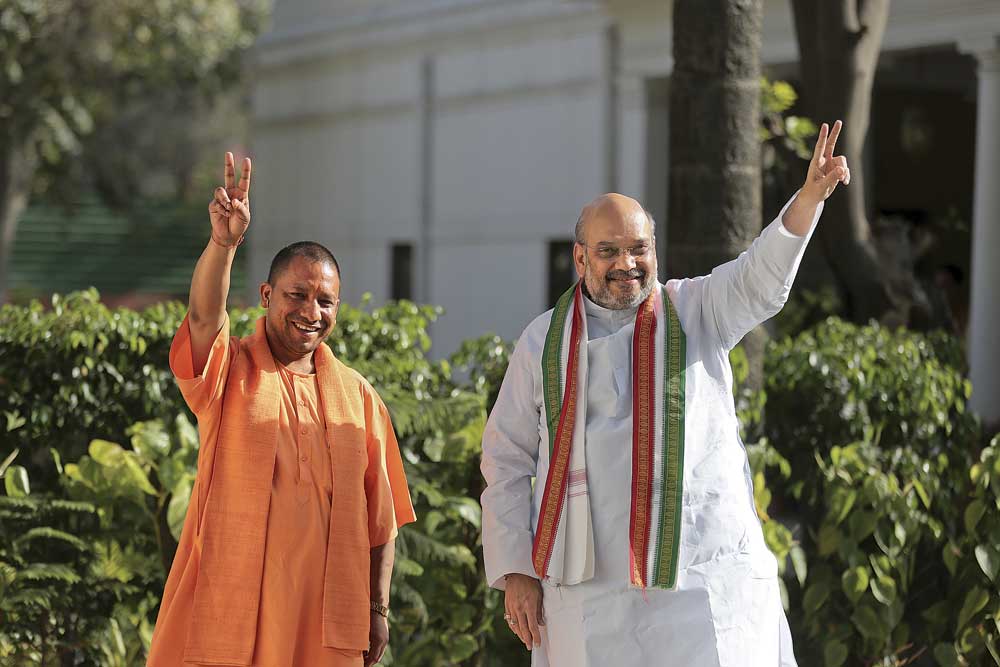 LIBERALS STILL FLOATING in alternative reality are angry but Narendra Modi’s choice in Uttar Pradesh is based on smart strategy and long-term dividends. Modi, who delivered the victory, has used the selection of Yogi Adityanath, the pontiff of the Gorakhnath temple, to reinforce his commitment to Hindutva. Since the electoral mandate was against the appeasement policies pursued by previous regimes, it was imperative that the man who took charge would represent a complete break from the past. In picking him, Modi’s message is unambiguous: that in his mission plan, the old boxes and boundaries of political correctness no longer hold any relevance.

The Yogi has not been a member of the RSS, and, when he was younger, had even been denied an ABVP ticket once. In more ways than one, the choice is similar to a couple of other positive acts of disruption by the Prime Minister over the past year: first, his tough decision to execute a ‘surgical strike’ against terrorists on Pakistani soil to neutralise them and their infrastructure, and second, his demonetisation of high-value currency notes that took over 85 per cent of the country’s cash out of circulation to curb corruption and enforce transparency in transactions.

By picking Yogi, Modi has exposed the liberal elite’s unwillingness to accept a man in saffron, a legitimately elected representative of the people, as the head of a state government. Yogi Adityanath’s image as a hardliner stands in such contrast to the moderate face projected by Union Home Minister Rajnath Singh, earlier seen as a chief minister- in-waiting by some, that the liberal intelligentsia began to react with shock as soon as they saw the Yogi’s chances brighten. Singh had been Chief Minister before, and, with his cultivated moderation, was more acceptable to Modi’s critics. News that the Home Minister had lobbied with the RSS for UP’s prized post had even given such critics a sense of comfort. It was to prove short-lived, though. Singh had been told during the later stages of the polls that the Modi-Shah duo would take the call on who would be appointed Chief Minister in Lucknow.

There were several reasons why the Prime Minister and BJP President Amit Shah ruled out contenders Rajnath Singh and Manoj Sinha, and threw their weight behind Yogi Adityanath instead. Singh was considered too deeply networked in Lucknow—given his familiarity with politicians across a broad spectrum—to make a bold statement of a decisive new beginning for the state. His image was that of an insider whose appointment would signal continuity. Sinha, in contrast, was seen as too mild by nature to be a decisive chief minister who would shake up vested interests in Lucknow and restructure its frame of governance. His political resume did not fulfill the criteria needed for a disruptor who could push through a political-ideological message in line with the mandate.

The context was important. Under the Samajwadi Party’s rule dominated by Mulayam Singh, his brother Shivpal Yadav, son Akhilesh Yadav and the likes of Azam Khan, Lucknow had acquired a scandalous reputation for wheeling-dealing by power brokers and intermediaries. To put an end to this sleaze, Modi and Shah needed a leader whose assumption of power would mark the start of a new era that would benefit all in the long-run. The Yogi was the man for the job. The leader also had to have an image as a tough man capable of clamping down on the corrupt, the criminal and the aggressive that called the shots earlier.

However, it wasn’t just about an image. The party needed a chief minister who would restore law and order and ensure compliance with norms in a time-bound manner. In a politically pivotal state, where the party seeks to improve on its 2014 Lok Sabha performance—when it and its allies won 73 of its 80 seats—in the General Election of 2017, the power duo needed a Lucknow man who they could repose confidence in. By plan, that is when the BJP under Modi will push for an even more emphatic endorsement of its leadership by not just winning more seats in Parliament but also making noticeable gains in its overall vote share over the 2014 figure.

The attribute that finally clinched the decision for Adityanath may have been his reliability quotient, which is significant in the context of the great push forward by the BJP in 2019. In the caste cauldron that was UP under the so-called ‘socialist’ parties, the Member of Parliament from Gorakhpur inspired confidence in Modi and Shah that he lead from the front and win over a wide cross-section of voters. The duo was convinced that Adityanath, a man of religion, was best placed to carry through their message of caste-neutral politics.

Despite efforts made by people in some quarters to portray the Yogi as a Rajput, the caste group of his family before he renounced his material life for religion, he has defied all caste labels and emerged as a catch-all Hindu leader who is popular among a majority of UP’s public. Among other caste groups, the Gorakhnath temple also draws thousands of Yadavs, the dominant OBC group nurtured and empowered by the Samajwadi Party. All electoral factors taken into account, the party president was confident that Adityanath had both the appeal and ability to maintain sway across the state, and in places far beyond the eastern parts where Gorakhpur is located and the pontiff has held clout for more than two decades.

Of all the local leaders that gave force to the BJP’s campaign for UP, Yogi Adityanath’s contribution was the largest. Other than Modi, no one addressed as many rallies as he did, and his effect on the crowds in attendance was electrifying, with people of diverse castes and socio-economic backgrounds held attentive.

Rajnath Singh, who was also roped in to campaign, lost the plot along the way and faded into the background even as he Yogi emerged as the party’s most popular leader from the state. What has worked so well on the campaign trail for the BJP is now expected to boost the Hindutva cause and achieve a Hindu vote consolidation in UP. In the 2017 Assembly polls, the effect of this strategy was to nullify the Muslim veto that anti-BJP parties have always banked on. The party now wants to ensure its longevity. A political project that overcomes caste divisions also fits in perfectly with the parampara (traditions) of the Gorakhnath math, which aims to erase such distinctions by holding regular ‘sahbhog’ functions where Hindus dine together only as Hindus, shorn of caste identities.

The road taken by the BJP may seem challenging and long, but the Yogi is determined to hit the ground running.