Philip Roth and Other Thoughts 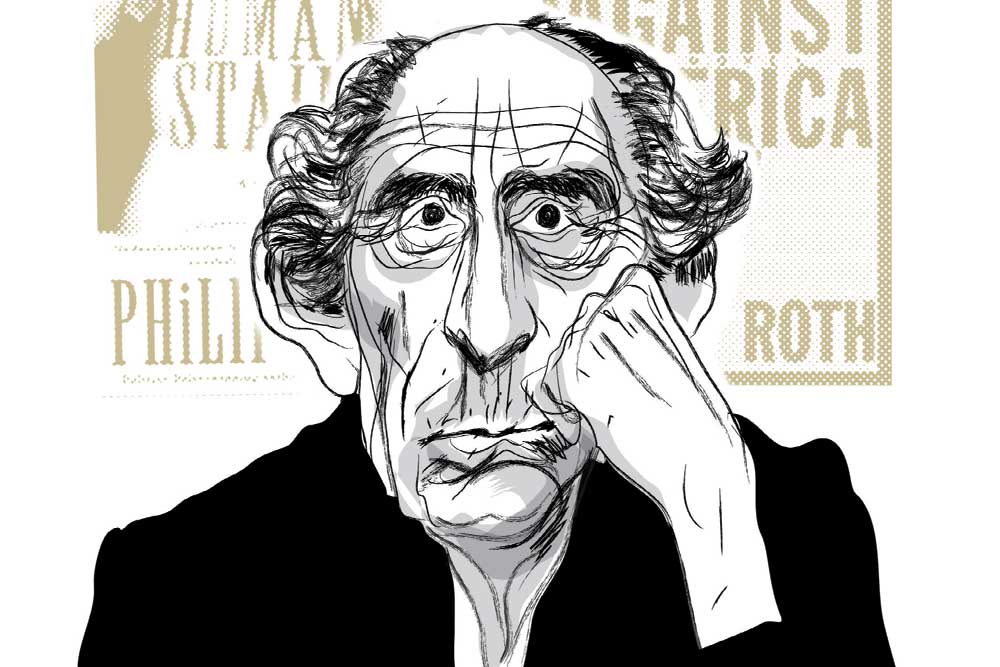 I would rather write about Philip Roth today. He died, after over 30 books and a career spanning half a century in storytelling, at 85, in New York on May 22nd. Instinctively, I return to The Human Stain (2000), my favourite, and realise how it has become a master work of fiction as a

pre-history of our colour-conscious, gender-militant, America Never age. ‘It was in the summer of 1998 that my neighbour Coleman Silk—who, before retiring two years earlier, had been a classics professor at nearby Athena College for some twenty-odd years as well as serving for sixteen more as the dean of faculty—confided to me that, at the age of

seventy-one, he was having an affair with a thirty-four year old cleaning woman who worked down at the college.’ So it begins.

The summer that Coleman took Nathan Zuckerman, the novelist’s long-standing alter ego, into his confidence ‘was the summer, fittingly enough, that Bill Clinton’s secrets emerged in every last mortifying detail—every last lifelike detail, the livingness, like the mortification, exuded by the pungency of the specific data. We hadn’t had a season like it since somebody stumbled upon the new Miss America nude in an old issue of Penthouse, pictures of her elegantly posed on her knees and on her back that forced the shamed young woman to relinquish her crown and go on to become a huge pop star.’

I couldn’t resist quoting at length because the furious urgency of his words, chiselled to razor-sharp perfection by a mind alive to the moral theatre of the times, propels us back to the profanities of the ‘piety binge’. These are words with an incendiary beauty, a savage sensitivity and a dissenting detachment. They set the context and provide the political atmospherics for Silk’s story of a racial trial, sexual salvation and, as in almost any Roth novel, the Jewish experience, which in The Human Stain is an existential secret.

It was a word, the silliness of which is infused with racial incorrectness, that felled him. Once in his class, he asked about two consistently missing students: “Does anyone know these people? Do they exist or are they spooks?” The students accused him of racism. This was Silk’s defence: “I was referring to their possibly ectoplasmic character. Isn’t that obvious? These two students had not attended a single class. That’s all I knew about them. I was using the word in its customary and primary meaning: ‘spook’ as a spectre or a ghost. I had no idea what colour these two students might be. I had known perhaps fifty years ago but had wholly forgotten that ‘spooks’ is an invidious term sometimes applied to blacks…What’s galling is that the charge is not false—it’s spectacularly false.” Silk’s own secret identity would, eventually, make the racial accusation redundant, at least in the court of his private conscience.

Spectacular falsities, their historical residues and living presence, made Roth a lone dissenter, an idyll breaker. In The Plot Against America, he, in the most rewarding counterfactual flourish in literary fiction, elects the aviation hero and Nazi worshipper, Charles A Lindberg, as the president of America in 1940, defeating the great philatelist and Democrat, Franklin Delano Roosevelt. It’s Roth’s what-if narrative that allows him—in real time and life as an American novelist—to come to terms with anti-Semitism and the Jewish tragedy. It is fiction as memorial service, and it’s set in places that bear his footprints as a child, places that tell ancestral stories. It is an explosive American saga, but the sensitivity of its maker is European. Roth, in his imaginations and conversations, shares the traumatic journey of the European Jew.

This Jewishness of his writing does not always offer one-dimensional clarity, and as in any fiction with a historical memory, it has ambiguity as well. Saul Bellow, whom Roth admired greatly, was the other great American novelist whose characters were invariably Jewish. ‘The fact is that,’ Roth writes about his friend in Reading Myself and Others, ‘Bellow’s deeply ironic humanism, coupled as it is with his wide ranging sympathy for odd and dubious characters, for regular Chicago guys, for the self-mockery and self love of the down-on-his luck dauphin-type, has actually made him a figure of more importance to other Jewish writers than he is to the Jewish cultural audience—unlike, say, Elie Wiesel or Isaac Bashevis Singer, who, as they relate to the lost Jewish past, have a somewhat awesome spiritual meaning for the community-at-large that is not necessarily of pressing literary interest to their fellow writers.’

The deeply ironic humanism that Roth attributes to Bellow applies to his entire oeuvre, though it’s tempting to be lost in the whirl of brilliance he creates with political and sexual aphorisms. His filial impieties and masturbatory excess in his breakthrough novel Portnoy’s Complaint (1969), his erotic meditations and verbal masculinity, his overwhelming Jewish awareness, and, as seen in his small novels towards the end before he had said enough, an obsession with death and decay, with old age and illness, are powerful, sprawling magnetic fields, but it is the granite integrity of being humane that makes his fiction an enduring reminder in an America of bogus pieties and disconnected memories.

Roth, along with Bellow and Updike, dominated modern American fiction as its supreme stylists and savants. (Now the baton is being passed to Don DeLillo and Paul Auster.) For his spiritual sustenance, Roth travelled back to the novel’s original homeland, Europe, where he found solace in Kafka (of whom he had written luminously), and where he shared the thoughts and fears of writers such as Milan Kundera (with whom he had published a fascinating conversation). The European, as Kundera said, is irredeemably trapped in history. The American carries no such burden of legacy. He tends to be swayed by the mythologies of the present. Roth, too, is astonished by its perversions and pathologies, but, as a remembering Jew, he was elsewhere even while at home in America. He belonged to that family of writers who told stories only to make this world a bit more bearable, to strike a semblance of balance between memory and history. Unlike some of his European counterparts, he did not need the street or the café to feed his dissenting mind. The idea of being in this world was the force that made Philip Roth bigger than the last great American novelist.

THE WORLD WILL remain a poorly argued, insufficiently imagined place without a writer like Roth. It was the novelist, not the historian, who translated the nation of the mind for us. It was in the imagination of a Gogol or a Dostoevsky that Russia got its most enduring interpretations; and it was the trinity of Marquez, Llosa and Fuentes that made Latin America a widely read piece of magic and melancholy, of tyranny and tears. The world is still enchanted and cursed, but the writing is largely provincial. The miniaturist is at work, with a few honourable exceptions. The big bad world is far beyond the comprehension of little beautiful books. Increasingly, it is the best of narrative non-fiction writers who make use of the art of fiction in their storytelling. To read the world today, I may turn the pages of a Timothy Snyder or a Simon Schama or a Lawrence Wright. Am I the only one waiting for the big book?

WE AT Open hate to miss a good idea—like the men and women who inhabit the following pages. We share their curiosity, which we think is worthy of a celebration. Please do join.