If Trump has achieved anything in this year-and-a-half of campaigning, it has been to drag a great national and party history through the mud 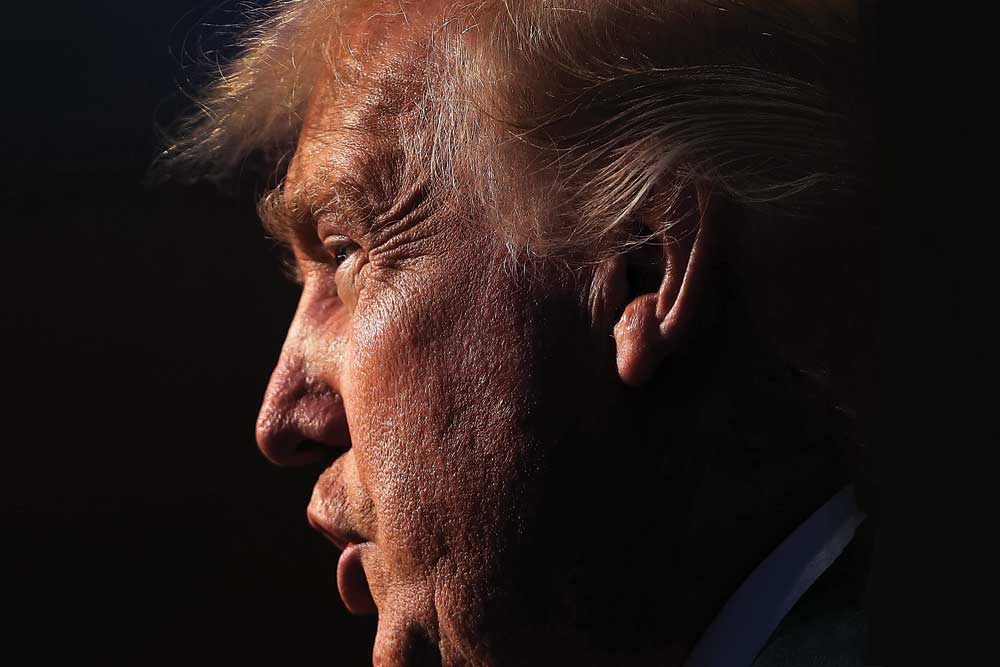 America is such a thunderclap of predictability.

All Donald Trump’s racism, misogyny and swinishness on world-wide TV in the last 16 months resulted in scant censure from leaders of the Republican Party; and yet he’s now in the doghouse for a secretly taped fragment of filth from 2005, a time when this huckster-cum- impresario was far, far removed from any expectations of presidential decorum. Trump’s first insurmountable political crisis— itself a remarkable fact in a campaign that has been flawlessly incendiary since June 2015—confirms that an American politician can get away with almost anything except the explicitly sexual. If you make folks gasp and think of a Commandment, you’re done for. If Hillary Clinton’s emails on her illicit server had contained muck about intimate body parts and fornication, she wouldn’t have lasted very long in the race. Lucky for her they were about foreign policy, national security, and the like.

The Republican establishment, which had stood by Trump (increasingly queasily, to be sure) while he ranted on podiums and ranged across the landscape of non-sexual vileness, recoiled in horror when they heard him tell a minor TV personality on a surreptitious recording that he would grab a woman “by the pussy”. It was a distasteful tape, made all the more emetic by the gleeful lust in his voice, but it was of a genre of sexual boastfulness that is described glibly (but not inaccurately) as ‘locker-room talk’. I say this not to excuse Trump, but to help us rank his words on a scale of his own verbal ugliness: They aren’t remotely close to being the worst thing he’s said in 16 months. They probably don’t make it to the Top Ten.

Party bigwigs, who scarcely administered a rap on the knuckles when Trump called Mexicans “rapists”—words you’d be unlikely to utter even in a locker room, but which Trump spat out on prime- time TV—swiftly turned their backs on their nominee for president. Paul Ryan, the Republican leader of the House of Representatives, announced that he would no longer campaign for Trump. John McCain, running for re-election to the Senate, said he wanted nothing to do with Trump (a man who’d previously suggested that McCain, a prisoner of war, was a coward for being captured). Trump’s demeaning of women—on that game-changing 2005 tape—was what did it, not his demeaning of all soldiers who are taken prisoner in wartime. There were many others who pushed Trump away, and this post-pussy stampede of Republican rejection brought to about 150 the number of notable partymen and women who did what they should have done on 19 July 2016, the day Donald Trump won the Republican nomination. They said ‘Ugh’, ‘Enough’, ‘No Way’, ‘Not In My Name’, ‘Not For My Party’.

The second presidental debate was a nadir in modern American politics. A jaded, complacent Hillary was unable to deliver a knockout blow to Trump just days after the crotch-grab tape

After the second debate, in which Trump disagreed brusquely and startlingly with the position on Syria of his running mate, Mike Pence, it was briefly rumoured that Pence, too, would abandon Trump. The rumours seemed logical and welcome, and briefly humanised Pence, who has a well-groomed placidity about him that can be saccharine and robotic at the same time. Writing on Facebook, Michael M Thomas—a friend of mine and the author, most recently, of Fixers, a novel about the rigging of an American presidential election—said: ‘If true, and along with all the other Republican notables who’ve fled Donald Trump, this would be a singular instance of a ship deserting a sinking rat.’

But Pence is gutting it out. He has accepted Trump’s grudging apology for the words he uttered on tape, describing him (unctuously and unconvincingly) as a “good man”. But as the delicious ‘sinking rat’ observation demonstrates, Trump has been a boon to writers who are masters of vitriol. And for that, we should be thankful. The presence of Trump on the national stage, the possibility of his election to the White House, and the hypocrisy that swirls around those who have tolerated his excesses, have driven a range of writers and performers to give voice to their feelings on the man, and on his corroding of American life.

George F Will, the foremost conservative columnist in Washington, lit up America earlier this week with a column that described Trump as the Republican Party’s ‘chemotheraphy’: ‘a nauseating but, if carried through to completion, perhaps a curative experience’. Dorothy Rabinowitz, the grande dame of the conservative editorial page of The Wall Street Journal—a page which has been deeply sceptical of Trump, even as it does little to mask its loathing of Hillary—wrote a stirring column that called for Hillary’s election, one that served both as a rebuke to Trump as well as to those (some of her colleagues included) whose Hillary-hatred blinds them to Trump’s irredeemably toxic menace. ‘Her election alone,’ Rabinowitz wrote of Hillary, ‘is what stands between the American nation and the reign of the most unstable, proudly uninformed, psychologically unfit president ever to enter the White House.’

There is no suggestion Hillary has broken the law in her pursuit of income; but the astronomical sums paid to her to speak to banks on Wall Street and the murk surrounding the Clinton Foundation have left a thick layer of grime on Hillary

Hillary is America’s ungainly, unloveable, uninspiring, unmotivating, but also unquenchably ambitious saviour in its direst moment of Trump-peril, at a time where significant sections of the White working-class—the men, in particular—are so disconcerted by their loss of material wealth; by their perception of America as a nation adrift on waters teeming with smarter, wilier foreign competitors; by the fear of an Islamist enemy and worries about unchecked immigration; and by (let’s be honest, for it is true for more than just a few) the apparent loss of racial primacy in a country that has had a Black president for eight long years, that they’re willing to cast their lot with a Pied Piper who will take them to a Promised Land (even if it is at the bottom of a cliff).

These voters hate Hillary. A lot of people hate Hillary. Hillary makes it very, very hard for them, for us, or for anyone to warm to her. And a reason why she’s disliked was laid bare in a poll earlier this week for Politico, the feisty Washington publication that should be on everyone’s reading list this election season. It was a poll to ascertain who had won the second presidential debate, and it found that 42 per cent chose Hillary (as opposed to 28 per cent, Trump). Yet the most eye-catching nugget in the poll was that 55 per cent of those surveyed thought Hillary is ‘corrupt’.

All Trump’s racism, misogyny and swinishness on world-wide TV in the last 16 months resulted in scant censure; and yet he’s now in the doghouse for a secretly taped fragment of filth from 2005

This is an astonishing figure, because corruption is not ever a factor in modern American presidential elections. I have followed these affairs with increasing degrees of closeness since Ronald Reagan beat Jimmy Carter (that lovely man who sinned in his heart), and of no candidate was it ever said—could it ever have been said—that he was corrupt. Corruption, here, is meant in the material sense, in terms of unseemly, unsavoury, and possibly unpardonable material gain. There is no suggestion that Hillary has broken the law in her pursuit of income, but the astronomical sums paid to her to speak to banks on Wall Street and the murk surrounding the Clinton Foundation (which her husband started after he ceased to be president) have left a thick layer of grime on Hillary.

The Democratic candidate has not helped herself by failing to release the texts of those Wall Street speeches—a failure which, in truth, should be just as irksome to the American voter as Trump’s brazen refusal to make public his tax returns. Why hasn’t she just published the transcripts on her campaign’s website? There could one of two reasons: Either they show that she was (a) so cosily ‘in bed’ with Wall Street that she feared (and still fears) putting off the young Democratic lefties who flocked to Bernie Sanders in the primaries; or (b) that the speeches were so utterly banal and pedestrian, so full of bromides and platitudes, that people will ask why she was paid $225,000 a pop to deliver such tripe— except in the obvious expectation that she would confer favours on Goldman Sachs or Deutsche Bank down the road? The few leaks from the speeches that are now in the public domain suggest that their content is best described as lying at a mid-point between (a) and (b). Either way, taking the Fifth Amendment on these speeches was her worst tactical mistake.

THE SECOND PRESIDENTAL debate was a nadir in modern American politics. A jaded, complacent Hillary was unable to deliver a knockout blow to Trump just days after the crotch-grab tape. She stuck to her script, fearful, no doubt, that any escalation of the narrative of Trump as a sexual molester would offer the latter a free passage to Bill Clinton Land, a place littered with tales of wronged women, some of whom testify to less-than-voluntary encounters with Hillary’s husband. Trump has always been more than eager to push the view that Hillary has been an enabler of predation, that she stands by her man—at the expense of many unfortunate women.

Trump has always been more than eager to push the view that Hillary has been an enabler of predation, that she stands by her man—at the expense of many unfortunate women

But it is women—women on a mission—who will be Hillary’s salvation, fittingly for a candidate who is on the verge of becoming America’s first female president. According to FiveThirtyEight, a website that focuses on electoral politics and psephology, it is women who are defeating Trump—fittingly, too, for a presidential candidate of quite peerless sexist chauvinism. Although Hillary trails Trump by five percentage points among male voters (roughly the same amount by which Barack Obama trailed Mitt Romney among men at the same stage in the last election), she leads Trump by 15 among women. (Romney trailed by eight percentage points on the distaff side.) As FiveThirtyEight puts it, ‘It seems fair to say that if Trump loses the election, it will be because women voted against him.’

The trailing Trump wrecked the second debate for himself not just by seeming to disagree wildly with his running-mate on major foreign policy questions, but also by threatening to jail Hillary if he becomes president. He snapped that he’d put her behind bars, in an ugly echo of the chant so often heard at Trump rallies, that slow, rolling “Lock her up, lock her up” that makes his crowds sound like Puritan mobs in search of witches to burn.

At that hair-raising moment, Trump sounded as if he were running to be president of the Philippines or Argentina, and not of the proudest, oldest, most successful, most imitated and—until most recently—wisest democracy in the world. If Trump has achieved anything in this year-and-a-half of campaigning, it has been to drag a great national and party history through the mud. When all of this is over, and Trump has lost, America will need to stand up, gather its wits, cleanse itself, and begin a long hard march back to sanity. 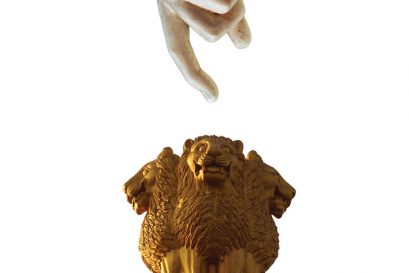 Is India at a moment where its democracy is in battle with its Constitution? 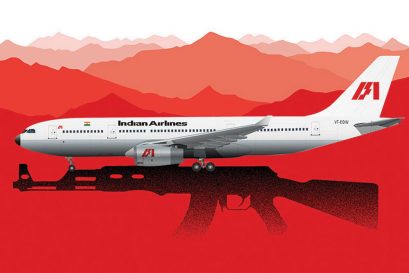 Kandahar 1999: Story of a Hijacking 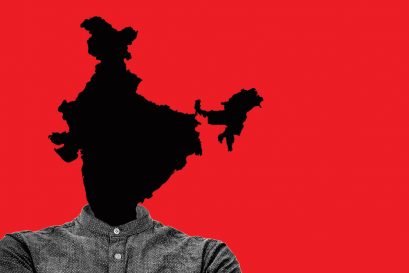 Who is an Indian?