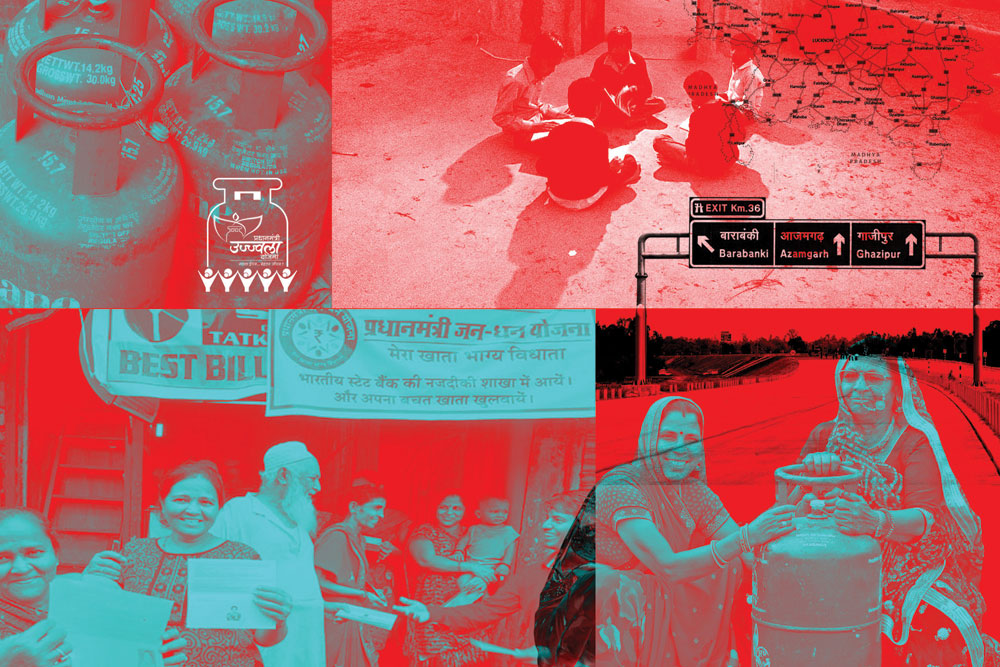 
Normally, the contentious elections to the Uttar Pradesh (UP) Assembly are influenced by the faultlines of religion and caste. For the first time, the sense one gets from various ground reports is that there may be a third factor: change in voting preferences of beneficiaries or the labarthis of the visibly improved law and order in the state as well as the recipients of the various social welfare programmes like housing, drinking water, cooking gas, electricity and toilets that have been rolled out on a war footing in the last five to seven years at the national and state levels.

Both Prime Minister Narendra Modi and Chief Minister Yogi Adityanath have made it a point to allude to this in every stump speech during the election campaign. The showcasing of a checklist of the government’s various achievements is intended as much to blunt anti-incumbency as to also create a new cohort of voters. Especially since the gains from this socio-economic trading accruing from improved governance are not necessarily tangible. Worse, the assessment is always subjective and depends on the peculiar circumstance of every household.

It is another matter that the historical neglect in providing these basic amenities has not denied other less committed regimes electoral victory in the past. This election was therefore a test for a new electoral experiment in Indian politics.

Indeed, Modi-Yogi’s success in their messaging, and harvesting of this social capital to pull off a record second win, probably sets in motion another round of rewriting of voter behaviour in UP. The ripple effect of this would, at least, force another political reset. Especially since the bulk of the beneficiaries of these social welfare programmes as well as improved law and order are the cohort of women—who are rapidly emerging as a key electoral constituency.

No election, especially those to an Assembly, are ever won or lost because of one single reason. Often, it is a combination of factors, including the composition of the opposition and number of rivals, the political allegiance and so on. Yet every state election has a standard set of necessary conditions—though they are not sufficient to guarantee victory. In the case of UP, this has long been caste and religion.

However, in the last seven years since the Bharatiya Janata Party (BJP)-led National Democratic Alliance (NDA) notched up an audacious win in the General Election in 2014 and did an encore in 2019, there has been a serious effort to challenge this stereotype.

The hint of change was signalled by Prime Minister Modi in his first Independence Day address in 2014 when he committed that the nation would end open defecation within four years.

“We are in the 21st century and yet there is still no dignity for women as they must go out in the open to defecate and have to wait for darkness to fall. Can you imagine the number of problems they have to face because of this?” he had asked in his national address, before adding, “People may criticise me for talking about toilets from the Red Fort. But I am from a poor family; I have seen poverty firsthand. For the poor to get dignity, it must start from here.”

Deftly, the prime minister had flagged a serious development deficit and tagged its urgent resolution with restoring the dignity of the poor, especially women.

Drawing inspiration from Mahatma Gandhi, who had spearheaded India’s independence movement, he had added, “When we celebrate the 150th birth anniversary of Mahatma Gandhi next year (2015), then millions of our Swachhagrahis will pay tribute to honourable Bapu, in the form of a Swachh Bharat.”

In 2014, open defecation in India was estimated at 600 million. Nearly three of five people in India did not have toilets. Five years later, every household was enabled access to a toilet in their home—resulting in the building of 110 million toilets.

The experience with cooking gas followed a similar pattern. In 2014, just about one in two households used cooking gas. Most depended on locally procured sources of fuel like firewood or kerosene—both a health hazard when used in the confines of a kitchen. As Modi pointed out in his Independence Day address, the brunt of this glaring deficit in basic amenities, too, is borne by women. In 2014, little over one in two households used cooking gas. Five years later, almost every household was brought on the cooking gas grid.

Undoubtedly the biggest public policy failure of the first 75 years of modern India is its failure to provide universal access to tap water. Prior to the launch of the Har Ghar Jal or water mission in 2019, access to tap water was available to only 3.12 crore rural households in the country—there are an estimated 19.19 crore rural households in India.

The story in urban India is no better. Yes more people may be accessing tap water, but only one city in India, Puri in Odisha, provides it 24×7 to all households. And even this milestone was logged only a year ago.

In short, access to basic service drinking water is a luxury. Not only does this deny people a basic standard of living and exposes them to a host of diseases from consuming contaminated water, it also hurts the productivity of the economy. Addressing this nationwide deficit, therefore, has been the biggest takeaway of NDA in its second tenure. 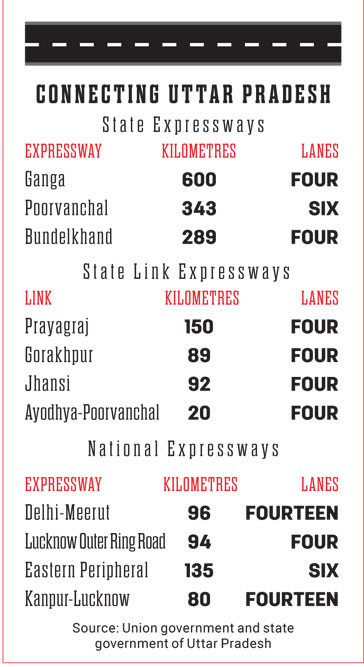 And this carries serious consequences, not just for the most populous state but for the entire country. In a tweet, Dr Sujay Shad, a New Delhi-based surgeon, detailed the impact in none too subtle terms: “Young men in some Bundelkhand villages can’t get brides because of perpetual water shortages. Women trudge long distances for water, leading to knee, hip, spinal deformities, and arthritis. (There is an) Epidemic prevalence of uterine and rectal prolapse in these regions.”

A national study conducted recently by the Indian Council for Medical Research (ICMR) only confirmed these fears. It found that one in 10 deaths of children under the age of five in India occurred because of diarrhoea. Inevitably, the poorer you are it is only logical to expect that you have less access to safe drinking water. Not surprising then that the odds are stacked against children born in poverty.

In the three years since the mission was launched, the number of rural households with tap water connections in UP improved seven-fold from 5.16 lakh to 35.26 lakh. The mission’s objectives are far from realised, yet it is still off to a good start.

Once again, as in the case of toilets, access to piped water could potentially turn out to be one of the most essential elements contributing to empowerment at the household level, especially for women. In the 2017 face-off for the UP Assembly elections, the provision of cooking gas had worked electoral wonders for BJP. It is therefore only fair to expect these women to respond similarly this time round too.

Academic research endorses the claim that universal access to electricity, cooking gas and tap water accelerates the empowerment of women.

In a conversation on the ‘Ideas for India’ podcast, Ashish K Sedai, a PhD candidate at Colorado State University, drawing from his research paper on water, electricity and female labour force participation, said, “I do believe that the issue of livelihoods in terms of not only access to drinking water but access to say television or electricity is critical in solving household issues from within.”

What access to these services does is significantly improve the likelihood of women’s employment and their health outcomes. Not to speak of the drudgery of daily life they will be spared.

An outstanding feature of NDA, in its first and second tenures, is the remarkable energy it has brought to road-building. Guided by Road Transport and Highways Minister Nitin Gadkari, it picked up pace from around 12 km per day in 2013-14 to 28 km in 2019-20. More recently, this pace accelerated to an impressive 36 km a day in 2019-20.

In UP, the Union government found a partner who matched its stride as it were in road-building. The state government launched the construction of three major expressways with a combined length of 1,232 km and a minimum of four lanes. Alongside, it has also initiated construction of state-link expressways connecting Prayagraj, Gorakhpur, Jhansi and Ayodhya-Poorvanchal. Once completed, these will complement the four national expressways—Delhi-Meerut, Eastern Peripheral, Kanpur-Lucknow and Lucknow Outer Ring Road—to provide unprecedented connectivity in India’s most populous state.

One potential collateral gain from this enhanced connectivity is the force-multiplier effect on commerce and thereby development activity in the state.

The ideology driving the effort to bridge these development deficits has been drawn from NDA’s preference for empowerment to entitlement. In contrast to the previous regime, the Congress-led United Progressive Alliance (UPA), NDA has opted for the strategy of teaching people how to fish.
And in this, the NDA playbook entailed providing universal access to basic services like electricity, drinking water, housing, financial services and personal security.

NDA also accelerated the Direct Benefit Transfer (DBT) scheme it had inherited from UPA. It identified the beneficiaries by linking their Jan Dhan bank account, mobile phone and Aadhaar and thereby ensured money was transferred directly to the bank account. The gain from this disintermediation was the dent it caused to corruption—yet again something that leads to empowerment. At the end of March 2020, the savings on account of DBT to the exchequer was ₹ 1.7 trillion—which was the size of the first Covid-19 relief package.

Similarly, in UP, the BJP government has in the last five years provided electricity to 1.8 crore households, 1.9 LPG connections and built 2.6 crore homes for the poor.

The fallout of Covid-19, which had dodgy origins in Wuhan, China, led to widespread economic pain. As a first line of defence, the economy had to be shut down for several months causing widespread layoffs. The worst affected were the poor and the scores of migrants forced to return home to UP. To mitigate this fallout, the Union government has bankrolled the world’s largest social relief exercise of supplying five kilograms of free foodgrains for 80 crore people. In UP, the 15 crore beneficiaries also received edible oil, dal and salt in their package.

It is clear then that the scale of material trading-up attempted in the country in general and poll-bound UP in particular is unprecedented. What this has done is to stoke the creation of a stakeholder economy. Instead of being perennially left out—and promised the carrot in every election cycle—scores of new beneficiaries of social welfare and those accessing basic material needs like electricity, drinking water and healthcare have been added.

Instead of being outside looking in, there are more people than ever before who are now inside looking out. The big question is whether the voter behaviour of these stakeholders will change for good—by prioritising the trading-up over the conventional draw of caste and religion.