At Home In The World 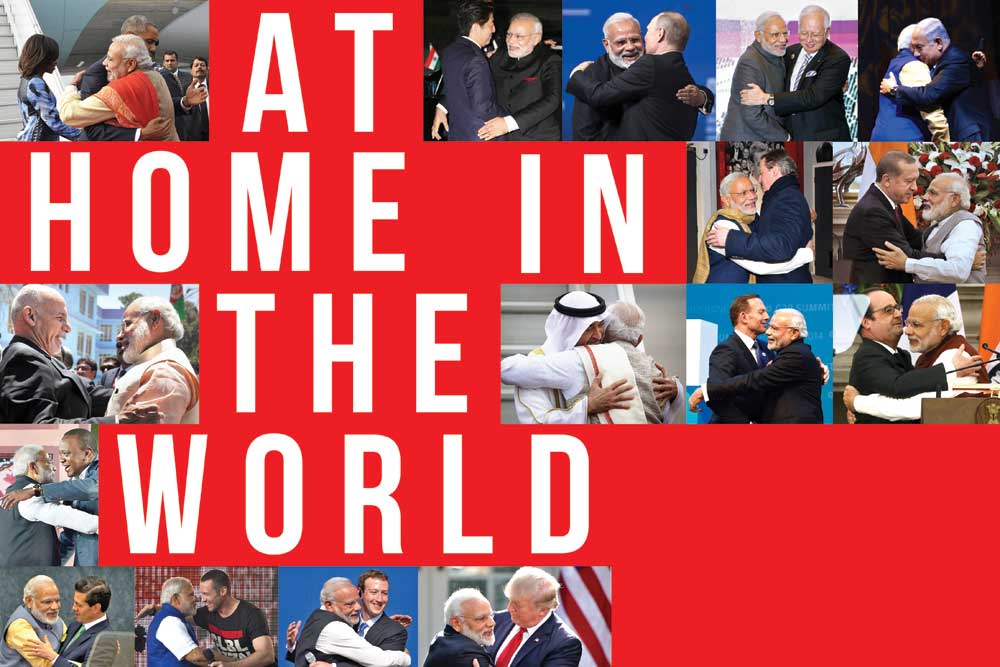 ORIGINALLY, DAVOS WAS The Magic Mountain of Thomas Mann, where, in a sanatorium, inhabitants of a 20th century masterpiece in fiction play out their existential drama as World War I looms in the backdrop. And it’s a site where one of literature’s most gripping arguments takes place, between a humanist and a Marxist Jesuit. Hans Castorp doesn’t go to Davos any longer. The town in the Swiss Alps is the destination for the evangelists and endorsers of globalism. The Davos Man is not, as in Mann’s novel, a tuberculosis patient in search of purifying air; he is the free spirit in a world of interconnected destinies.

This year in Davos, Donald Trump was the most powerful anti- guest, and placards along the way un-welcomed him. Marching against the American president may be a cathartic experience for liberals today, but the man himself is, essentially, anti-Davos. America is greater for him when it is secure within its borders, and the bad world out there—shitholes and all—is a burden on the future.

The most feted Davos manhood was someone else’s, and Narendra Modi played the part perfectly. The Indian Prime Minister devoted his speech almost entirely to portraying India as a united as well as a unifying force in a “fractured” world. It was the speech of a leader who was aware of his place in the world, and confident of his relevance in shaping it to match his ideals.

He did not say India First, not even figuratively. In a connected but less integrated world, he repudiated the culture of fear and invoked “wealth with wellness”. The five pillars of global India, in his words, are: the idea of reform and transform, technologically enhanced governance, infrastructure, the ease of doing business, and inclusive development.

Thankfully, missing in Davos was a Third Worldist in awe of, or in rage against, the world. The Prime Minister who went to Davos with a high-power entourage was not a paranoid provincial from the East, but a leader who enjoyed his freedom at home to reach out to and engage with the world.

In another time, in another world, the Indian leader’s preferred destination was another Third World capital steeped in anti-colonial struggle, and his company consisted of liberators- turned-despots presiding over cannibalistic regimes. It was glorious to be inspired, and even guided, by the Soviet Union. Back then it was a moral, which meant socialist, responsibility to be a proud anti-imperialist. America then was an evil imperium more vulgar than the orange man, and India was in the vanguard as founding custodian of Third Worldism and NAM.

Even as the world changed, India remained stuck in its dead certainties. (And, it must be said, the last vestiges of Third Worldism as a mindset still survive in certain sections of the Indian policy establishment.) It took almost a decade after the fall of the Berlin Wall for India to recognise the redundancy of anti-Americanism and the possibilities of the post-Cold War world—and the credit should go to Atal Bihari Vajpayee and his Foreign Minister Jaswant Singh. They set the stage for Manmohan Singh’s nuclear deal with the US.

For Modi. the world is a puzzle of power, ever shifting, and it’s a game to be won by players with a greater sense of national interest and intellectual curiosity

Still, India remained a tentative globalist, burdened by its legacy, and constantly aware of its moral obligations as the leader of non- alignment (yes, we were believers still). We continued to mouth the old platitudes borrowed from freedom struggles of the colonised.

Modi marked the shift, and in retrospect, the change he brought in was different from what we see today in populist or ‘outsider’ regimes elsewhere. When he reached Delhi in 2014 after a campaign that lasted more than a decade—one of the longest in a democracy—it was not another functional regime change. It signalled a cultural rupture in the passage of power. It was his aura as a no-nonsense nationalist with no family interest that made him singular. He was bigger than the numbers he commanded. The idea of a greater India did not make him a nationalist introvert, the most familiar figure in the age of political nativism.

The fall of the Nehruvian edifice, sustained by a state wiser than its citizens in matters such as religion and nation, brought an end to the culture of entitlement and entrenchment. Soon, Modi would prove that he shared something with Nehru: a broader sense of internationalism. Between them, there was no Prime Minister who was as swayed by the world as these two. They looked at the world differently. Nehru was a lofty idealist for whom the world was a moral battlefield, and his India, liberated but still scarred by its anti-colonial struggle, had a historical responsibility to lead the underdogs. Modi is a pragmatist, and his India realises that, at this juncture in its life, it needs to get rid of the burden of inheritance.

For him, the world is not a moral arena divided between ideologies. Nor is it a vast marketplace without moral scruples. It is a puzzle of power, ever shifting, and it’s a game to be won by players with a greater sense of national interest and intellectual curiosity. Modi began by playing out our Asian self, and by emphasising our pre-eminence in the near abroad. All the while, he was pretty clear about two things: India won’t be a slave to its obsession with Pakistan; and it won’t, officially, suffer from a China complex. These deviations were a show of national confidence. Pakistan may remain a constant in our conversation on national security, and a surgical strike may show what India is capable of, but we are not a country trapped in its immediate fears. China certainly has a longer vision about its interests and influence, and its only rival in the region is India, which, in Beijing’s view, continues to be strengthened by demography and democracy. Chinese nationalism is sustained by wealth and fear. India is not intimidated, for a change.

So the Asian Century need not necessarily be China- centric. As Gideon Rachman writes in Easternisation: War and Peace in the Asian Century , ‘While the last years of the twentieth century and the beginning of the twenty-first century had been shaped by the emergence of the Pacific Rim as the new core of the global economy, by the mid- twenty-first century, the rise of the Indian Ocean Rim—linking India with a fast growing African continent—could well be the next centre of global economic dynamism… The idea that India might one day be at the fulcrum of global economic development underlines the point that the story of Easternisation is about much more than China—and indeed about much more than Asia. The shift in economic and political power from west to east is reshaping the whole world.’

The new wise man from the East is democracy’s most popular leader. He is the only one travelling the world with an open mind, not as a salesman but as a storyteller

In conventional wisdom, the Asian Century is a synonym for a Chinese century. The new Helmsman, Xi Jinping, is currently engaged in the biggest mythmaking project in post-imperial China. The Xi cult has domestic as well as international use. At home, it is a reminder that the so-called fifth modernisation—or democracy— is incompatible with social capitalism. Xi will make you happy, let you prosper, but won’t entertain your questions. He may beat America in the size and spectacle of capitalism, and he may even ape America in naming his idea of future (Chinese Dream), but he will remain afraid of his own people. Such a leader can make the world nervous. He cannot lead the world. China covets the world, but it cannot ease its vigil at home. China will have to wait for its century—or for a leader who will be the ultimate moderniser.

The Asian Century is not an occasion for celebrating the decline of the West—or more specifically America—either. The combined strength of wealth and democracy will keep the West on top of the game, in spite of China’s extra-territorial terror tactics and competitive capitalism. The West is not in decline; a disruption of leadership has made it static. The president of America is no longer the leader of the free world; he has become a source of global derision. He even gets the adversary he deserves, Kim Jong-un of North Korea. The new Cold War is pure comic strip. The more Trump tries to make America great again, the less it becomes a natural ally of freedom and idealism.

Trump is only the most glaring example of the crisis in Western leadership. For post-War Europe and America, it’s perhaps the lowest point of leadership. In the UK, Theresa May is a lame duck, or, to quote her adversary from her own party, a dead woman walking. She is a victim of her own illegitimacy. In Germany, Angela Merkel is a pastiche of herself. The only exception is France’s Emmanuel Macron, the glib globalist. And across the continent, fiery nativists are rising from the extreme ends of the Left and Right, reclaiming the rights of the absolute nation. More than 25 years ago, when the Berlin Wall fell, the world owed a great deal to Reagan and Thatcher and Gorbachev, leaders who played with big ideas. Today, the West has no leader who can redeem questions on immigration and inequality from the rhetoric of nativist radicals.

That is why the moment is Modi’s. The new wise man from the East is democracy’s most popular leader. He is the only outsider who is a moderate in power—and the only one who is travelling the world with an open mind, not as a salesman but as a storyteller. No globalist in power enjoys the kind of democratic legitimacy Modi does. It’s national expediency that drives international idealism, and Modi’s conversations with the world have already made India a captivating story not just in Davos—and the storyteller the most authentic voice from the free world.

This story is so good that we should not allow foot soldiers of the phoney Indian culture war to mar the narrative. And the story will be a bestseller if Indian inequality is not as glaring as it is today. You descend the Magic Mountain only to hit the social realism of the homeland.