Honeycreepers in the Land of Fire

Learning about the evolution of birds 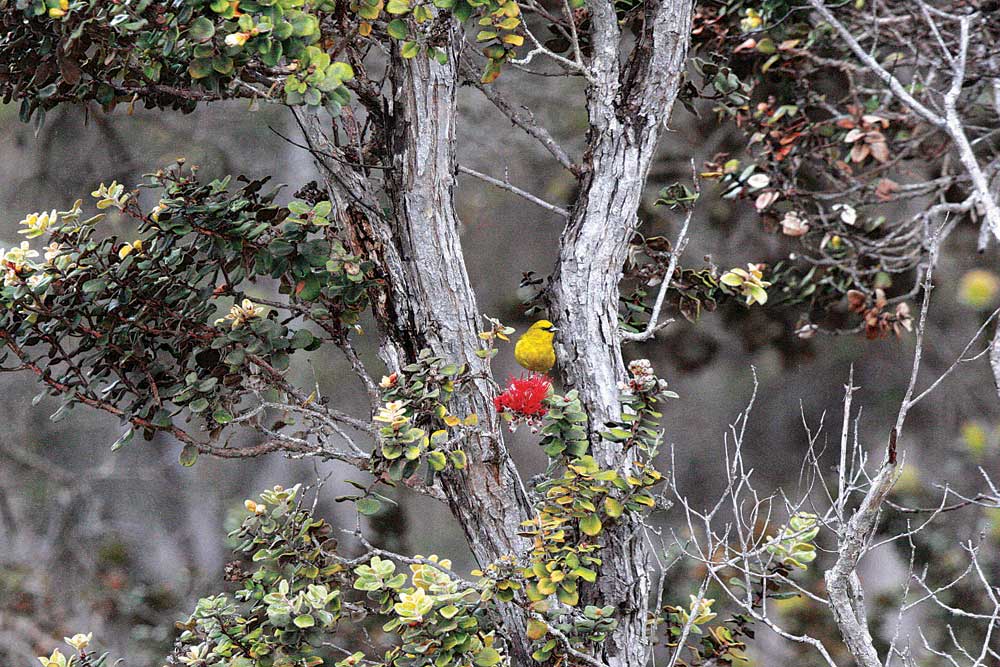 “IF DARWIN HAD come to Hawai’i before he went to Galapagos,” said Gary, our guide for the day, “he would have solved the question of evolution ever so sooner.” And he might have well done so if he had looked, as I did, rather intently, at the Hawaiian honeycreepers. There it was, the mythical palila, half hidden in the foliage of a māmane tree, stripping a seed pod, golden head now visible, now not. There could have been no other way to see it. If it were out fully in the open, it would have been rather ridiculous behaviour for a critically endangered bird that typifies endangerment. If it were not stripping away at its almost sole food source, the poisonous māmane, it would not have demonstrated its extraordinary way of survival. And if we had not seen it at all, we might have questioned the fantastic fight-back that the conservation community of Hawai’i has been engaged in for the sake of the palila and all other honeycreepers that represent perhaps the most actively evolving group of birds in the entire world.

But before I delve into the story of the palila, one must look at the land that harbours the golden bird. Hawai’i, to the geologist, is as interesting and unique as palila is to the ornithologist. The island chain is among the most recent of volcanic pieces of rock that have arisen from the Pacific Ocean, thrown upwards by massive oceanic eruptions. That is the geologists’ point of view. For ancient Hawaiians, the islands are the home of Pelehonuamea, or Pele, of the sacred earth, a fiery volcanic goddess with a temper to match. Pele, no relative of the currently more famous soccer star, lives, it is believed, in the Kīlauea volcano in the Big Island of Hawai’i, having been driven there by her older sister Na-maka-o-Kaha’i, the Goddess of the Sea. Hemmed between sea and rock, she dug into the crater for a home and revealed her true beauty to the ancient Polynesian sailors who came to the island. Through her volcanic tresses flowed the largest single piece of rock that the world has ever seen. Mauna Loa, only 13,677 feet above sea level but 31,000 feet from the seabed (that’s 2,000 feet or more higher than Mount Everest), with its gentle shield-like slopes comprising 10,000 cubic miles, is indubitably the largest piece of stone on the Earth’s surface. What is even more remarkable is that it is an active volcano, having erupted 18 times in the last 100 years. But unlike the fiery temperament of Pele, the volcanoes are remarkably mellow, and the lava flows gently down their slopes, allowing tourists even today to see the Kīlauea volcano glower all night without much of a life scare.

On the slopes of these volcanoes grow some amazing plants about which it is equally important to know something if we are to understand how birds evolved. Outstanding amongst them, both in being omnipresent and a major food source for the honeycreepers, is the ••hi’a. Typified by fiery red flowers that are a major food source for the equally red honeycreepers like the scarlet i’iwi, the crimson apapane and the golden amakihi, the ••hi’a has two really cool secrets of survival success in the hot world it lives on. It can grow on hot volcanic rocks with no soil whatsoever, as long as it gets some rain. It can also hold its breath for two weeks at a time if it chooses to! Yes, indeed, the ••hi’a closes its stomata when a nearby volcano explodes, sending poisonous fumes and ash into the air. It can open it two weeks later when the air clears. What a remarkable evolutionary trick to cheat the flaming Pele!

Equally interesting is the endemic wattle, the koa, which when young has divided leaves that look like those of normal acacias and as it grows older and taller, develops long eucalyptus like leaves. The trick is that these second leaves are not really leaves but swollen leaf stalks or phyllodes. It is probably one of the only trees where you can see two kinds of leaves on one individual. And then, of course, there is the māmane in the dry tracts, which has evolved to have seed coats containing bitter phenols, with the embryo itself having deadly, poisonous alkaloids. Consequently it is absolutely safe from all kinds of birds trying to feed on it, at least in most parts of the world. But not in Hawai’i, the land of contemporary evolution. The palila has mastered the trick of eating poison and has survived, just about, in this land of molten lava and toxins. The bird seems to ingest the toxin and excrete it, having taken in the nourishment it requires. It even feeds its nestlings the toxic seed along with some titbits of an endemic caterpillar for a protein shot. But the reason ornithologists love the palila is less to do with its extraordinary capacity for survival, and more to do with its bill.

Beaks have always fascinated evolutionary biologists, including the father of the evolutionary theory, Charles Darwin. The Galapagos finches were his inspiration and it was on a rather short visit to those islands that he picked up the threads of what would many years later be written up into his masterpiece on the theory of evolution. In Hawai’i too, the finches have come to roost and evolve in peculiar ways.

Once upon a time, nearly 4 million years ago, just after the island of Oahu (on which the capital of Hawai’i, Honolulu, is situated) popped up out of the ocean, it seems that a set of Asian rose finches descended upon the islands. No one can be sure why, but biologically the phenomenon is known as irruption, a mass dispersal of birds seeking new grounds. Much like the Malayalees in the Gulf, this set of rose finches made their new home all their own, branching out into all available niches. Rose finches are small, pale, rose coloured birds with sparrow-like bills. But in the newly formed island of Oahu and later, in the islands of Maui, Kauai and Hawai’i, these proto- honeycreepers started looking rather weird. Not so much in body shape, which remained more or less the same, but in the shape of their bills. Many developed long sunbird-like nectar drinking bills, shortest in the amakihi and longest in the i’iwi. In the latter, the bill curves so much that it resembles a sickle. Others such as the palila stuck to the original seed-eating habit of the finches but developed much larger sizes and bill weight to tackle the larger seeds of the māmane. In fact, when you look at the palila today, the bill appears to bulge out on both sides rather alarmingly. Still others, like the most remarkable akiapola’au, took on the woodpecker niche: One bill sickle- shaped and nearly double the size of the lower bill, which is short, straight and stout like that of a woodpecker. And so the birds flourished, quickly radiating into over 50 species. And all was well in the paradise of Pele till the arrival of the mosquito.

The culex arrived in Hawai’i in the mid-1800s after James Cook famously discovered the islands. With its arrival came avian malaria and avian pox, two dreaded diseases that started wiping out the birds. In 100 years, the twain accounted for the disappearance of more than 30 species. Humans discovered both these diseases only in the early 20th century and by then most of these wonderful evolutionary ideas were dead. Today the native bird refuges are only on the higher slopes of the volcanoes, more than 4,500 feet high. If and when the native birds come lower down, the mosquitoes get them, and so do the two diseases. Those that don’t come down survive, and only just. The palila survives in 30 sq.m and there are fewer than 5,000 birds left. Only 18 birds survive and more than half of them are endangered. There appear to be only a few, like the amakihi, which seem to be doing well despite the malaria. Is it that the amakihi has developed its own secret to outwit the mosquito in a land that manufactures evolutionary tricks?

In a story about Hawai’i and birds, one cannot forget the nene, the only surviving goose on the island, which had gone down to 30 birds before making a remarkable recovery to now number over 5,000. The nene, which evolved from the familiar Canadian goose that found its way to the islands half a million years ago, is a relative newcomer to the state. Yet, its resurgence, thanks to Peter Scott and the Wildfowl Trust, who bred the birds and released them back into Hawaii, is the stuff of conservation legend. That is why (and perhaps because it is a big and beautiful bird) the nene is the state bird of Hawai’i. But for me, the honeycreepers are far more fascinating. The palila, which took the state to court and became the first bird in the world to be nominated in a legal case (in Palila vs. the State of Hawai’i), is a rightful flagbearer for Pele. It has beaten back the poisonous fumes of Pelehonuamea, it has overcome the poisons of the māmane, and who knows, it might yet beat the mosquito too.