Not feeling fruity? Go veg out 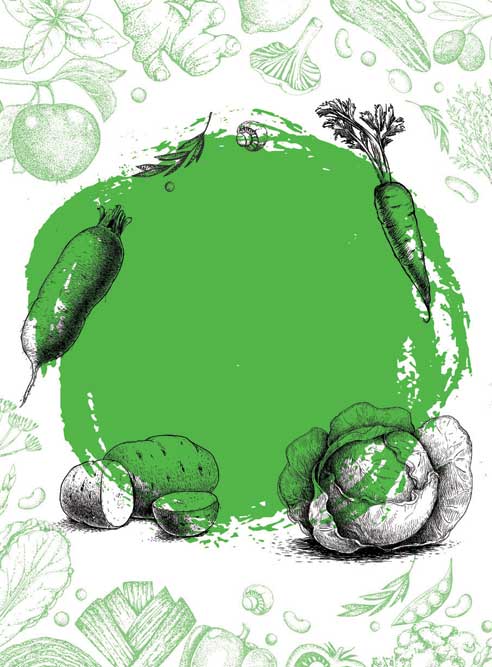 Still life is perhaps my favourite form of art. It was often the art director’s cover of choice on the first recipe books I bought, back in the 1970s, when my vegetarianism was permitted at home only if I made my own food. My favourites were Elizabeth David and Jane Grigson, the spattered pages of which slyly reveal the recipes I’ve returned to again and again.

I’ve made some amateur attempts at growing vegetables, first as my grandfather’s assistant. The husband and I once had an allotment but had to give it up reluctantly. Still, I featured in the Guardian as one of its ‘academics with allotments’. I suggested to the journalist that he should interview a colleague whose allotment is a true garden of plenty. Alas, the resulting piece made it straight into Private Eye’s renowned column, ‘Pseuds’ Corner’, so I hope he didn’t think it was a set up. The professor now consoles himself with a Padma Shri.

The husband is third-generation Irish, and though he’ll call me a racist when he sees this, potato plays a larger role in our house and a far greater one in the garden than it ought to. My family used to plant our potatoes on St Patrick’s Day, though he says this is not an Irish tradition. The Irish peasant ate 5-7 kg of potatoes a day and I think he comes quite close. I occasionally make Irish colcannon or my own north-eastern Pan Haggerty, but they are regular items at home. We try not to joke too much as the mid-19th century Irish Potato Famine remains one of the great human tragedies

I’ve never met a vegetable I didn’t like. All of them, prepared any way. Books based around vegetables are personal favourites, along with more recent ones such as Moro East and River Café Cookbook: Green (and yes, it’s worth paying for their great vegetarian dishes). Or Skye Gyngell and, of course, no north London gathering is complete without dishes inspired by Yotam Ottolenghi.

I still like traditional British vegetables: carrots, always in batons, never in rings, though large chunks are allowed in stews; peas, which I used to shell with my grandmother on Sunday mornings, but now usually buy frozen; the broad bean, an old staple, so much nicer when skinned.

Northern working men have leek-growing competitions, so, in a rather silly form of snobbery which denied pleasure, I didn’t eat leeks, but now the thin ones have become a delicacy.

Beetroot is another vegetable reclaimed by fashionable cooks such as Ottolenghi, no longer drenched in vinegar but served in many delicious ways. I find it a pain to cook as it takes so long, is so messy and leaves purple fingers and usually at least one other stain, as well as causing alarm the next day in the bathroom.

The once-luxurious asparagus seems to be in endless supply despite the impact of its smell on the body. I still prefer the green English asparagus to the white asparagus from Europe, and smaller shoots with added air miles. It has now become acceptable to eat asparagus with a knife and fork, whereas, like globe artichokes, it was one of the few foods that Brits had to eat with their hands.

All brassicas or cruciferous vegetables deserve a mention for their glorious name alone. The Brussels sprout, hated by many, equally vile when undercooked or overcooked, can be a thing of beauty. Oh what fun to see old translations of Sanskrit likening a woman’s fingers to sprouts, meaning tender shoots of plants. The schoolgirl’s legend of finding half a slug in a sprout was often told and it’s still fun to fight a duel with the sword-like stems.

Cabbage kept northerners alive and supplied with vitamin C in the winter. I’ve often fancied making sauerkraut but I gather the smell is astonishing and far-reaching. Cabbage is strange in that it has to be cooked for a few minutes or slow-cooked for three hours or more. The great cookery writer Marcella Hazan’s minestrone cooks the vegetables for three hours yet tastes entirely fresh. The husband shops at the local farmers’ market to cook me a vat of it on winter Sundays, enjoying the slow rhythm of chopping as each vegetable cooks: first the onions, then the carrot, then the celery, potatoes, courgettes, green beans, tomatoes and more.

I still peel my celery–did you ever meet anyone who likes a celery string? And always peel potatoes other than new ones. I don’t care if the vitamins are in the skin, I’m healthy (in several senses) without them or silly vitamin pills, thank you.

Even though our own vegetable patch is too small and the soil too heavy—London clay—for growing enough vegetables at home, I happily accept donations from friends to make my autumn pickles which will be ready in time for Christmas. My two staples are piccalilli, an Anglo-Indian pickle, full of turmeric, carrots, runner beans, cauliflower, cucumber and shallots, with a curious thickening of flour. The boiling of this turmeric sauce always induces anxiety with it potential to stain the kitchen. The other is Elizabeth David’s green tomato and pumpkin chutney, full of pepper and spice, essential with hard English cheeses.

Categories of vegetables and fruit aren’t as clear as they may be. My inner pedant enjoys this—so the tomato is a fruit but rhubarb is a vegetable. Mushrooms aren’t vegetables at all but fungi, and for some people they are not vegetarian enough.

Yet, despite pleas to reduce vegetable air miles and to eat seasonally, how dull it would be—indeed it was dull in the 1970s—if we couldn’t get exotics now in ready supply at my local Bangladeshi, Arab shops and my favourite Turkish shop.

Indian vegetables, if cooked with a light touch, are wonderful. I love them all. Tinda, karela, suran, anything. The number of names is fascinating. How many names for gourds and pumpkins are there? I know the western Indian names best. So batata or pateta rather than aloo; cauliflower is flower rather than gobi (the husband blenches at the mention of Gobi Manchurian), onions are dhung, not pyaaz. I still find cooking for strict Jains challenging, though manageable, and I’m glad to report there is some truth about the absence of vegetables—or vegetables without meat—in Pakistan.

I still remember vividly the first time I ate aubergines. It must have been in 1976 when my mother produced these bizarre-looking black vegetables she had enjoyed when she lived with my father in the British naval base on Malta. Many of my Indian friends disdain this wonderful vegetable, which always worries me. I think of the songs where Radha who, having quarrelled with Krishna, says she will avoid anything black like him, including aubergines. The etymology is said to be traced from Catalan, through Persian to Sanskrit vaatigagama, whose possible connection to the word ‘wind’ can probably be ignored. There are dozens of words in Sanskrit for aubergine, my favourite being vRnta which also means caterpillar, stalk, water-stand or nipple.

Aubergine béchamel/ cheese sauce was the staple vegetarian food I must have eaten weekly during the 1980s. My favourite is caponata, a Sicilian stew of aubergine and celery in a sweet and sour tomato sauce, spiked with green olives and capers, often with anchovies (no thanks) and pine nuts. I also enjoy ratatouille, Turkish dishes of fried and stuffed aubergine, as well as India’s baingan bharta or Gujarati ringan batata, and East Asian dishes such as Japanese miso aubergines. Just please don’t call it eggplant.

I’m not sure whether to be amused or annoyed that the aubergine emoji was banned from Instagram searches for non-vegetarian reasons requiring a bit of imagination. Is it a bias towards fruit that the peach and the banana survived? Anyway, not feeling fruity, I’m off to veg out.