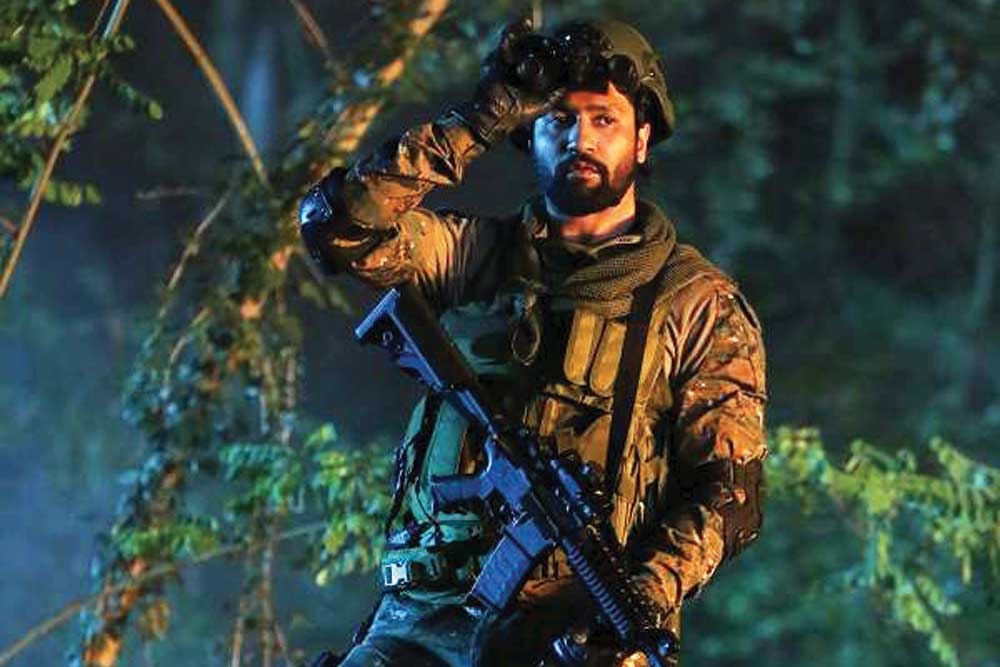 MAINSTREAM HINDI FILMS are more concerned about striving for emotional accuracy than the aesthetics of realism. A Hindi film has to engage the audience not just mentally but physically, so that they are stirred to weep, laugh and be angry by stars embodying emotions or values, their feelings intensified in close-up shots, delivering moving dialogues in a meaningful mise-en-scène where emotions are transferred onto inanimate objects, with spirited background music and, most famously, with songs which condense dialogue to lyrics. One of the feelings that films can arouse in the audience is patriotism, as a heroic star, perhaps in uniform, uses powerful oratory associated with the nation (Maa, Bharat, Shaheed, Kurbaan), set against stirring music, declaring undying enmity to those who dare to insult India.

Several genres of films arouse patriotism. DG Phalke’s Raja Harischandra (1913), usually regarded as India’s first film, was conceived as a swadeshi film. Mythological and devotional genres aroused nationalist sentiment in the form of the religious, as did the historical, to avoid censorship by the British.

Since Independence, the Hindi film itself has tried to forge a national culture, largely avoiding controversy in favour of a consensus on Indian values and traditions. Most genres created an all-Indian hero, tall, fair and vaguely north Indian, largely avoiding mentions of caste.

Overtly nationalist films have focused on patriotism, often biopics showing heroes of the freedom struggle, including Bhagat Singh, overlapping with the historical film which has ranged across themes drawn from ancient India to the Mughals to the colonial period. The Indo-British film Gandhi (directed by Richard Attenborough, 1982) has been one of the most celebrated of them all.

There have been fewer overtly political films, perhaps because of censorship issues, although remarkable films have been made, including the 1975 Aandhi (Mrs G-Aandhi) and the 1997 Tamil Iruvar (MGR and Karunanidhi), while Raajneeti (2010) amalgamated the Mahabharata and The Godfather with performances that showed identifiable political figures.

However, in 2019, the election year, several films have had a more overt political slant, not least as they feature figures active in current politics. There is a film and a web series about Prime Minister Narendra Modi, whose releases have been postponed, while an earlier film, The Accidental Prime Minister, concerned Manmohan Singh and the Congress.

Raazi (2018) is a spy drama based on the true story of an Indian Muslim RAW agent, who marries into a Pakistani military family to spy on them before the 1971 war. It shows Pakistanis as mostly kind, normal people but the heroine betrays her husband for her country, only to realise her country puts itself before her, thus deflating any patriotic sentiment.

A genre which has had limited production in India is the war film, although key examples include Haqeeqat (1964), which although it concerns the 1962 war in which China defeated India, its portrayal of the brave jawans led to its screening for the 70th anniversary of Independence, presented by the Directorate of Film Festivals and the Ministry of Defence. It would be a strange person not to be moved by the film’s songs, including ‘Kar chale hum fidaa jaan-o-tan saathiyon’. Border (1997), set during the Battle of Longewala in the 1971 war with Pakistan, also stirs patriotism while showing the cost of war on the families of the soldiers. There were several films released about the Kargil war and the Line of Control, which again take a patriotic tone.

This year’s Uri: The Surgical Strike features characters who closely resemble Prime Minister Modi and National Security Advisor Ajit Doval, overseeing the ‘surgical strikes’ on Pakistan following the assault on Uri in 2016. Its release at the time of the Pulwama terrorist attack and its aftermath earlier this year no doubt contributed to the huge success of the film. Vicky Kaushal’s brilliant performance as a national military hero, Major Vihaan Singh Shergill, can elicit from the audience the same response as he does from his men when he asks them how high the josh is. The use of this word by Manohar Parikkar, who was Minister of Defence at the time and was terminally ill during Pulwama, and by the current Minister Nirmala Sitharaman suggests they were seeking electoral advantage by exploiting the current Government’s assertive military stance against Pakistan.

The historical biopic mixed with costume drama has been used by filmmakers to recount seminal moments in India’s national history, following the success and controversies surrounding Sanjay Leela Bhansali’s Bajirao Mastani (2015) and Padmaavat (2018). This year, Manikarnika returned to the ‘First War of Independence’ (once known as the Sepoy Mutiny of 1857) in a biopic of the Rani of Jhansi, in which Kangana Ranaut plays a warrior queen who alone defies all odds to resist the British. The film has powerful images of female warriors in red and green, with swords and guns, men in white forming a celluloid tricolour, again boosting the audience’s patriotic sentiments.

Manikarnika contains complex readings which feed into current patriotism, not just about this revered national heroine but also about broader strands of patriotism and nationalism evident in India today. The film’s heroine is regal but in touch with her people, a loving wife and mother but also a warrior and an educated woman. The film focuses on the splendour of an India oppressed by wicked and brutal Britishers who even take a calf away from its mother to kill and eat it. The Britishers are pantomime villains but speeches in the film about the English in India feed into the patriotic sentiment. It is significant that two of the film’s writers are major figures in the portrayal of nationalistic views of India. The screenplay is by KV Vijayendra Prasad who wrote the Baahubali films (Telugu/Tamil and dubbed into Hindi), making nationwide historical/fantasy films which create powerful images of a Hindu Indian past. Some of the dialogues are by Prasoon Joshi, whose exceptional skills in arousing emotions extends beyond the romantic to the nationalistic, his talents deployed in interviewing Prime Minister Modi during his London visit in 2018.

The films this year help to narrate the nationalist struggle, said to begin with 1857, formerly reaching to 1947, but now extended to the present struggle for a new Hindu nationalism. The films build on an idea of nationalism centred around devotion to Mother India, cow protection, the use of Hindi and portray, through the lens of contemporary Indian new middle-class values, feudal and royal devotion to great leaders, advancement of women in the public sphere, all wrapped up in the persuasive form of mass entertainment.

These figures have been seen in different ways in the past. The Rani of Jhansi as Manikarnika is very different from the last century, where the Azad Hind Fauj, the Urdu name for the Indian National Army, called its women’s regiment the Rani of Jhansi regiment. This was led by Captain Lakshmi, who later stood as the communist nominee for president of India. It is also differs from Sohrab Modi’s reading of the legend in his Jhansi ki Rani (1953, dubbed and cut in English as The Tiger and the Flame), which failed at the box office.

The patriotism manifested in these recent films is linked to ideas of a specifically Hindu nationalism. Yet they are made by a Mumbai-based film industry, made up of mostly family-run businesses, with its high proportion of Muslim personnel (stars, musicians and directors), and its roots in a syncretic Islamicate culture. Moreover, many filmmakers strive to be apolitical with some notable exceptions.

In these elections, the future of India is at stake. Both sides may claim to own nationalism but patriotism knows no party. The rhetoric of anti-nationalism is used against those who query the government rather than the nation. Others claim India herself is under attack. The audience is sensitive to propaganda and being bludgeoned by films carrying too overt a political message, seeking entertainment and emotional realism. Just as the politician must woo the electorate, so must the filmmaker find his/her audiences for the entertainment film. The josh is high but the battle is far from over. 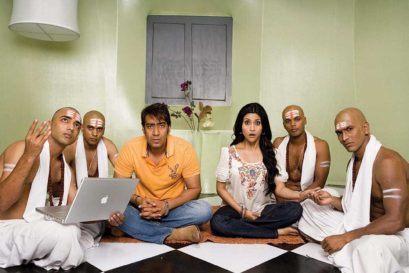