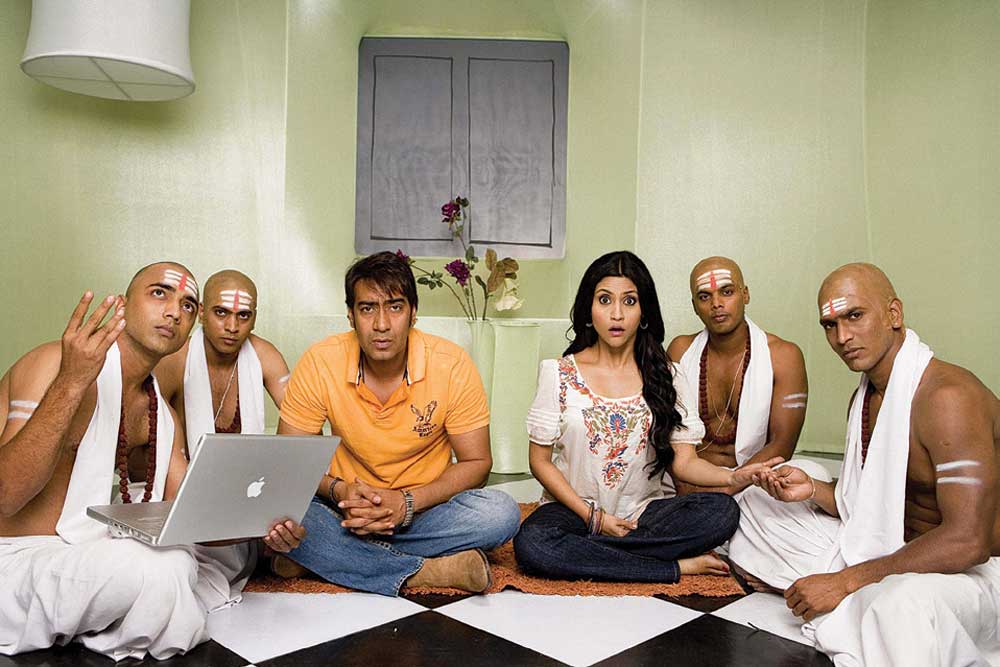 FOR VISITORS FROM overseas, the biggest risk to health in India is what I have coined: ‘militant’ hospitality. Any occasion, indeed any excuse, means that one must press some special food and drink on one’s guests. For extreme hospitality moments, I have tried to master the trick of putting my arm over my plate to stop more food being added but I am no match for a good hostess who always manages to slip the spoon neatly underneath.

My family has always offered food and drink to any visitor and I have a horror of running out of food for guests. One London Book Fair, I blithely said to Mr D that he should invite all his publishing friends as no one would come out in the cold wet winter weather and they’d all have jetlag. Eighty people showed up and all were fed and watered. I had to recruit some assistance to wash up for multiple settings and we were as crowded as a Bombay local in rush hour, but we had a jolly time.

I remember visiting other Brits as a child where people would postpone a meal, often for an agonisingly long time, rather than invite others to join them. My mother regarded this as rude, always asking my friends who had dropped in if they would like to call home to say they’d be joining us for lunch. There’s a running gag on the long- running British radio comedy I’m Sorry I Haven’t a Clue, “You’ll have had your tea”, which translates as: “So I don’t need to offer you anything.”

I have no idea why my mother was so hospitable. Perhaps it was just her nature. I try to keep this going, though nowadays no one just drops by in London but we often have people home for meals. A sense of humour and an abandonment of perfectionism are essential, as is a partner who pours a good glass.

In a similar vein I remember once giving a nice bottle of single malt to an Indian friend. I was struck when he said to us that he wanted to share it with special friends. A Brit once said, while giving me something similar, that we’d want to keep it for ourselves.

I don’t buy the Brit argument that they don’t need to return Indian hospitality as it’s easy to host in India because of servants. While it makes life easier and one can spend more time with guests rather than taking turns to sit with them at all times, there’s still planning to be done. Indian guests expect a different type of hospitality: a larger number of dishes, which enables catering to many complex food requirements. We keep it simpler. We don’t serve beef or pork (unless requested); we separate strictly veg and non-veg; and I always ask the egg questions: Will you eat them at all? If you can’t see them? If they are completely concealed? We also prepare for the stampede to leave as soon as dinner is over.

This hospitality extends to Indian hotels. Some of my wealthier European friends don’t enjoy top-end Indian hotels. They complain that they’re not top-end enough and the wine lists are poor and the food not so great. These are not my concerns. The two main Indian chains train their staff impeccably and they also show genuine enthusiasm in offering real service.

We tend to avoid hotels with large family groups, tour groups and wedding parties, but still wish we could avoid the entitled guest yelling, “Don’t you know who I am?” (Answer, yes, an ill-mannered moron.)

In Atithi Tum Kab Jaoge? a distant relation visits a family in Mumbai. Although the family are driven to distraction by his behaviour, when they discover it was all a mistake and he isn’t a relative at all, they have become so fond of him that they decide he is an honorary relative and ask him to stay on

We often stay in clubs which we adore, the Royal Bombay Yacht Club in particular, and independent hotels. Sometimes the coffee matters. The Neemranas are always a joy, although I had another coffee incident in Tranquebar last year with only instant coffee. Fortunately, I was restored by on tap ‘kaapi’ in the Bangala in Chettinad although I had an alarming moment when we were served western food as we were mistaken for being part of a European tour group who wanted soup and sandwiches. Honour was swiftly restored in a ‘Death by paniyarams’ experience.

We tried the Raas in Jodhpur on a friend’s recommendation. I responded sulkily to the apologies for the broken coffee machine though it didn’t stop me eating a hearty breakfast. When we left for Jaisalmer, the staff at the desk apologised profusely. When we returned, the first thing they told me was that the machine was repaired. They insisted we had a top-end room to compensate. I was mortified by my childish behaviour but they seemed genuinely upset that they had disappointed me.

I loved the thali service at Shreyas hotel when researching the National Film Archives in Pune. There were photos of all the famous guests and I was sorely disappointed never to feature, despite my great feat of eating so many dahi vadas (it may have been twelve) that the cook came out to meet me.

When I was a teenager and a junior lecturer, I stayed in some truly awful hotels and more recently in some nasty guesthouses. Terrifying bathrooms, flickering tube lights, smelly carpets, air conditioners (such luxury) that flashed blue sparks, oily imprints of former guests on chairs and sheets, unwanted flora and fauna, fans which could make the noise of helicopter without moving the air and breakfasts of greasy tea and soggy toast. The sorrow of the staff at serving such misery was apparent on their dirty clothes adding to the odour of disappointment at failing to be hospitable.

I have been welcomed in so many homes in India that I can never reply the kindness shown. I would never invite a traveller in to use the bathroom, yet this has happened often to me when travelling in non-touristy areas in Kerala and Odisha. When I was researching my PhD on the Gujarati poet, Kavi Dayaram, I visited his hometown of Dabhoi. I drank 17 cups of tea that day as a refusal was met with ‘Well, you did in the last place you visited.’

My friends have lavished hospitality on me, remembering my love for dal and anything with a pulse (groan), making me my favourite dishes. Even those who prefer a risotto will take me to eat chaat even if they don’t indulge themselves.

The tradition of hospitality goes back to ancient India. In the Mahabharata, Kunti welcomes the Sage Durvasas into her father’s home and he rewards her with a mantra to give birth to sons. The same sage, who is described as ‘sulabhakopa’ (quick to anger) cursed Shankuntala for failing to show him proper hospitality. The curse was that the one whose memory distracted her (Dushyanta) would forget her. Only her friends’ pleas persuaded the sage to allow a token of recognition to lift the curse so that her husband would recognise her.

One of my favourite film clips of tales from the Mahabharata is a story of Mahasati Savitri. Savitri has unexpected visitors in the ashram whom she cannot feed. She prays to a cow on whose body the gods are manifest, with Annapurna Devi sending forth thalis, mats, and maidens to fan the guests to redeem the family’s honour.

In the film Atithi Tum Kab Jaoge? a distant relation from Gorakhpur visits a family in Mumbai. The greatest of his many disasters is to destroy a film set he visits. Although the family are driven to distraction by his behaviour, when they discover it was all a mistake and he isn’t a relative at all, they have become so fond of their guest that they decide that he is an honorary relative and ask him to stay on with them.

Twenty years ago, a friend and I flew to Lucknow as we were invited by the son of a landed family to their ancestral palace in UP. We were surprised not to be met at the airport nor the family’s palace in Lucknow, but were warmly welcomed after a five-hour road journey to the palace. We were shown our rooms after an amazing dinner and then as we sat on the terrace, our host asked politely who we were and why we had come as no one had informed him of our visit.