All About Family Values

When movie mothers are no longer saintly widows in white saris 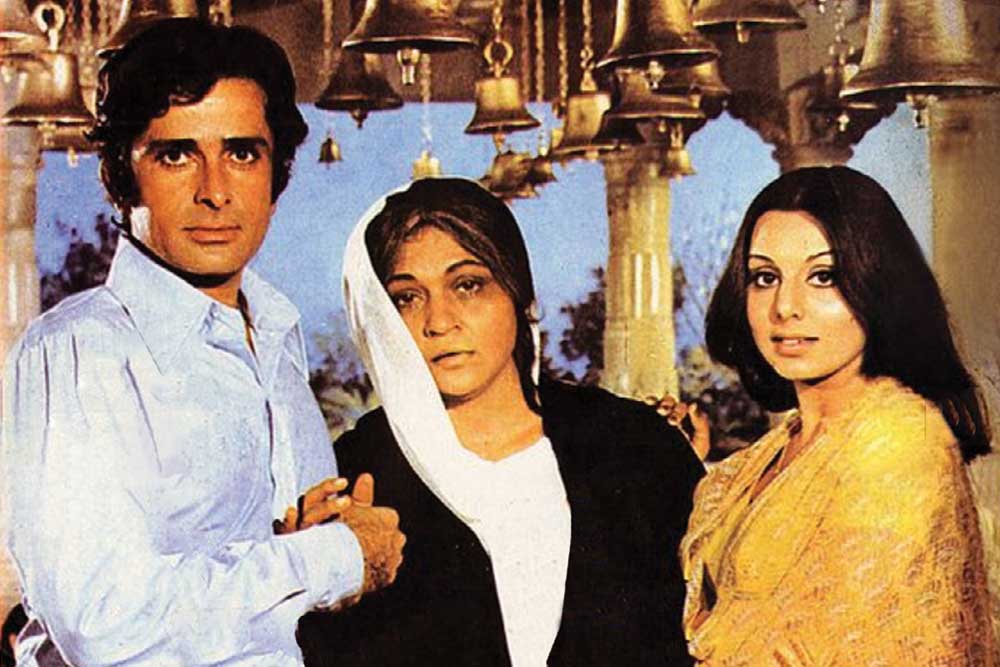 Sooraj Barjatya’s films are entertaining because of their songs and cuteness, but there is no salt to cut the sweetness. There is rarely a moment of dramatic tension in Hum Aapke Hain Koun…! (1994), we have three hours where nothing much happens followed by a fall downstairs, which leads to a marriage being arranged although the couple had other plans. It could easily have been stopped with little upset to the family, but instead of this minor drama, Krishna directs Tuffy, the dog, to take a message to the groom designate.

A once-happy family cracking under the strain of melodramatic events may become a very unhappy one, but the audience knows more than the family and is assured that everything will end happily ever after. ‘Lost and Founds’ are the best example of this type. When Amar, Akbar, Anthony (1977) opens with the three male leads giving a direct blood transfusion to their mother and the voiceover intones, “Khoon khoon hota hai, pani nahi”, you know you’re in for a treat. The mother loses her three children, is blinded, but from the outset we sense they will be reunited—and three girlfriends will be blended into the masala—and Shirdi Sai Baba will perform a miracle and all will be restored as the ‘anhonee’ becomes ‘honee’. Or not really; but who cares when you’re having this much fun?

Yash Chopra’s classic inter-generational love story, Kabhi Kabhie (1976), showed that problems can be solved by love and communication. Pooja’s parents want her to marry someone else, so she leaves Amit, even after he’s sung Kabhi Kabhie. She soon falls in love with Vijay once they’re married, though keeps a soft spot in her heart for Amit. Vijay discovers they were once close, but, in one of the most mature remarks in Hindi cinema, says that any man would have been in love with her. Amit can’t move on and broods until a crisis is precipitated and he learns the truth that families may be different but they are all happy in the same way.

These imaginary families in films may shape our ideas about what the family is—or could be or should be—but television soap operas have developed the women-centric family drama with plots hatched, foiled and carried through as the principal narrative tensions and attractions of the series.

There are other national dramas too. The Indian nation itself has long been a family drama with Bapu, Chacha Nehru and Indira Gandhi sometimes appearing as Mother India. Family politics are not the in-thing at the moment, perhaps marking the demise of this moment.

The two great Indian epics, the Mahabharata and the Ramayana, both have narratives that are centred on family problems. In the former, one set of cousins fight another, the Bhagavad Gita being revealed on the battlefield as Arjuna proves reluctant to fight his family.

The Ramayana has a wicked stepmother, a staple of folktales worldwide (in the West best known as Snow White’s). Here, family values are upheld by the next generation, as Bharata knows that the throne belongs to his brother and keeps his shoes as a reminder of his own place.

Gods are also part of families. Many images show the Holy Family of Shiva (Parvati, Kartikeya and Ganesha), while Rama and Krishna, Vishnu’s avatars in human form, are born, raised and live as part of family units. There are family squabbles—Shiva and his father-in-law, sibling rivalries and so on, but the unit remains intact.

While Mother India plays out as a family drama, the struggles that her family faces are too much for most. The father is disabled and abandons his family, the mother kills her wayward son, other children die in floods and famine, leaving only the son Ramu and the mother alive at the end of the film, although the village is saved by technology.

Hindi film melodramas are not only about romantic couples but are also pre-occupied with fitting the couple in to the wider family structure. In the classic Amitabh Bachchan films of the 1970s, written by Salim-Javed, the hero has to fight his way through the problems that society has presented his family even if the law of the land contradicts that of his kin. He may break the law and has to die, but he has acted according to a sense of justice that may be stronger than the state’s.

In recent years, we have begun to see more dysfunctionalfamilies on screen in films such as Dil Dhadakne Do (2015) and Kapoor and Sons (2016). But why do people want to watch other families behaving badly when they visit the multiplex, often en famille? Perhaps this is because we only learn about families through our own limited direct experience, or through cultural texts. When Freud developed his theory of the family, he used Greek literature, such as the Oedipus legend, to show how a story became important, and myths are important stories. We are captivated by them precisely because they make sense of the world around us.

The Indian family today is changing. The joint family still remains an ideal, even in the light of divorce, breakups and so on. The family unit may be reduced to a nuclear family or even to a couple but weddings and other events still bring families together.

The ideal of family and the home remain strong, whatever the reality on the ground. Yet, films showing change are needed. It is not surprising that the patriarchal figure of films as recent as Kabhi Khushi Kabhie Gham (2001) is no longer all powerful and mothers are no longer saintly widows in white saris. Films like 3 Idiots (2009) look at the individual choices of children who rebel against parental ambition.

Mainstream films are only just touching on domestic problems but tend to avoid engaging with violence, ‘dowry death’ and other forms of injustice such as the abuse of elders. Films have also engaged with bullying within the family, no longer just the mother- in-law/daughter-in-law but also bullying of children and the young, as seen in films like Rockstar (2011), with its constant stream of criticism.

While the man may be depicted as an alcoholic (the perennial story of Devdas) or as pathologically jealous (Aap ki Kasam, 1974), we do not see men suffering in the family other than in comic mode. It remains taboo to show a man abused physically or verbally by his wife whose rages and moods frighten him.

We do not often see divorce and its prelude, where the house may be a wilderness without love and happiness but the couple remain together for the sake of children, in the mistaken belief they are unaware of the sadness, the fights and the hostility between man and wife.

Sexual problems are largely excluded from mainstream films, which eschew elements that destroy families, whether it’s dysfunction within a marriage, rape within marriage, or incest, some of which do feature in art-house cinema.

One of the films that most surprised me was Baghban (2003). In earlier Hindi films the villain is usually known to the family or may be some sort of relative, often a maternal uncle, or Mama. This film had a new cast of villains. Although most remembered it as being about the failure of children to look after their ageing parents, the real surprise was the lack of a melodramatic reunion at the end. Family values were upheld, but only by the adopted son, who undermines the quote above from Amar, Akbar, Anthony.

Despite its problems, most of us want to belong to a happy family, the one we make if not the one we were born into or married into. We may think films are all about sex and romance, but the Hindi film melodrama is also about love. As Adam Phillips has pointed out, ‘If sex is the way out of the family, falling in love is the route back.’