The Education of a Prince 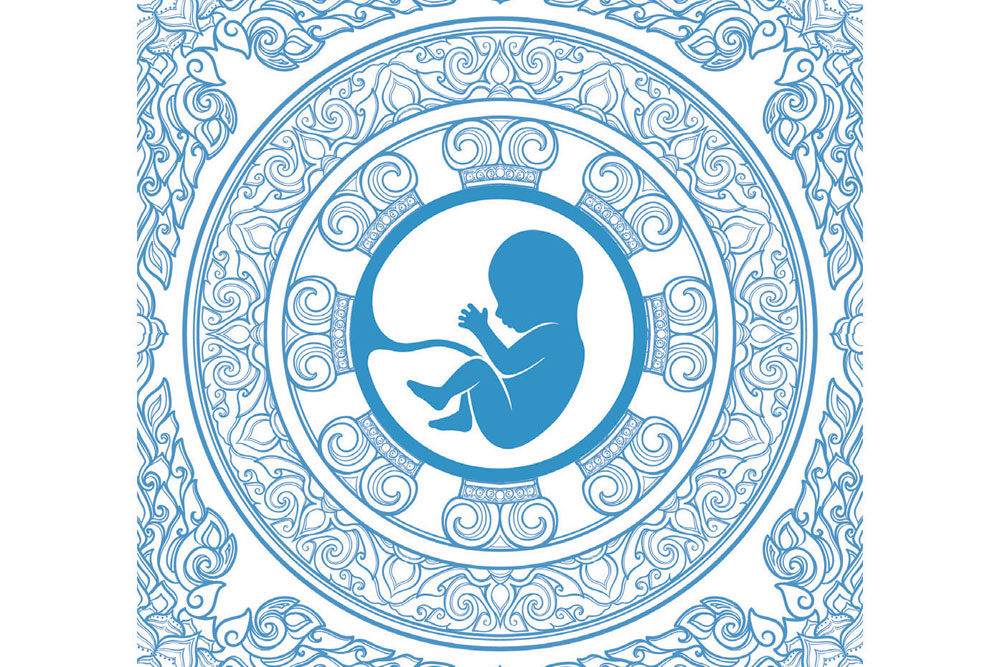 Madalasa gave birth to her first son and Ritadhvaja named him Vikranta. Hearing the son’s name, Madalasa laughed. Once, the infant son was lying down on Madalasa’s lap, weeping in indistinct tones. To soothe him, she said, ‘O child! You are pure and you have no name. That has only been thought of now. You are not this body, consisting of the five elements. It does not belong to you. Why are you weeping? Or perhaps you are weeping because of your birth. Despite being pure, you have been born on earth, created out of many elements with qualities and devoid of qualities, with all the senses. In this world, a man is born weak. Created from the elements and nourished by the elements, he grows, with food, water and other things. But what belongs to you? What grows and what declines? This body is only a covering. When it is shattered, you will still remain. Do not be so foolish as to get attached to it. Because of good and bad deeds and because of delusion caused by insolence, you have been tied down to the bonds of this body. The father, the son, the mother and the beloved are terms that amount to nothing. This is mine. This is not mine. Do not get entangled in this aggregation of elements.’ This is Madalasa’s famous song and the Sanskrit lyrics are wonderful. There are beautiful renditions in music, sometimes floating around on the internet. The entire song is a bit longer, but the quote has the salient bits.

Thus instructed by Madalasa, Vikranta grew up. Since he had been soothed in that way, he developed an understanding of the atman. He obtained his strength and his intelligence from his father. In a similar way, because of his mother’s words, he developed an understanding of the atman. Having developed this understanding since birth, the son became wise. He had no sense of ‘mine’ and his mind turned away from garhasthya. A second son was born and his father addressed him by the name of Subahu. Madalasa laughed again. As was the case earlier, she soothed this child similarly. As she spoke to him, he too developed that understanding. When the third son was born, the king addressed him as Shatrumardana. Madalasa laughed again. As before, she developed the child’s understanding. Therefore, he was without desire and did not pursue anything that would yield fruits. When the fourth son was born, the king wished to give him a name. He saw that Madalasa was laughing. Since she was laughing, the king was filled with great curiosity. He said, ‘Whenever I wished to give a name, you laugh. Tell me the reason for this. I think that the names I gave—Vikranta, Subahu and Shatrumardana—were good ones. Since they indicate valour and pride, they are appropriate names for Kshatriyas. If you think those weren’t appropriate names, then you give a name to the fourth son.’ Madalasa replied, ‘O great king! I must certainly do what you have commanded me to. I will therefore name your fourth son. This one will know about dharma and he will be famous in the world by the name of Alarka. Your youngest son will be intelligent.’

Ritadhvaja heard the name the mother had thought for their son. He laughed and said, ‘The name you have thought for my son is meaningless. [Etymologically, ‘alarka’ doesn’t mean anything, though it does mean a mad dog.] What is the point of giving such a meaningless name?’ Madalasa replied, ‘O great king! Conferring a name is no more than customary practice. The names you have given also have no meaning. Wise people say that the atman pervades everything. The word ‘kranti’ signifies that a person is going from one place to another place. But the atman that is in the body is everywhere and does not go. Therefore, in my view, a name like ‘Vikranta’ is meaningless. You gave your son the name of Subahu [one with excellent arms]. However, since the atman is without a form, this is meaningless. You gave your third son the name of Shatrumardana [one who crushes enemies]. But I think this is also meaningless. It is the same atman that exists in all bodies. Who is an enemy and who is a friend? It is only because of customary practice that such names are thought of. In that case, why are you of the view that the name ‘Alarka’ alone is meaningless?’

Ritadhvaja had to agree that Madalasa was right. But when Madalasa started to speak to Alarka in exactly the same way that she had spoken to his elder brothers, Ritadhvaja protested. This was not fair, this was not dharma. A prince should not be instructed such that he turned away from his dharma of ruling the subjects and protecting them. After all, Alarka had been born as the son of a Kshatriya.

At this, Madalasa taught Alarka about the dharma of kings. ‘O son! Do good deeds to friends and destroy those who are evil-hearted. Conquer the six enemies of kama [desire], krodha [anger], lobha [avarice], moha [delusion], mada [arrogance] and matsarya [jealousy]. Do not think about what is transient and use your understanding to counter delusion.’

Instructed thus, Alarka grew up. After his sacred thread ceremony was over, he requested his mother for some more instructions about raja dharma, the dharma of kings. Madalasa said, ‘Having been instated in the kingdom, one must rule over the earth and perform all the tasks that delight subjects, as long as they do not conflict with one’s own dharma. Since they strike at the roots of truth, one must avoid the vices. By ensuring that counsel is not divulged outside, one must protect oneself from enemies. One must distinguish the wicked from the virtuous and identify advisers who have been corrupted by the enemy. Using spies, the king must ascertain the enemy’s efforts. A king should not trust his friends, his acquaintances or his relatives. If the task so requires, the king should trust even those who are not friends. The king must not succumb to desire. He must first control himself, then the ministers, servants and citizens. It is only after he knows this has been done that he acts against the enemy. A wicked king is destroyed by enemies like desire, anger, avarice, insolence, pride and delight. A king must learn from the conduct of a crow, a cuckoo, a bee, a crane, a snake, a peacock, a swan, a cock and iron [perseverance from the crow, accumulation from the cuckoo, collection of taxes from the bee, patience from the crane, concentrated virulence from the snake, extension (of the kingdom) from the peacock, discrimination from the swan, arising at the right time from the cock and hardness from iron]. Towards the enemy, a king must behave like an owl [strike when the enemy is not aware]. At the right time, the king must act like an ant [accumulate like it]. His acts will be known as much as fire in kindling or seeds in silk-cotton [they will only manifest themselves at the right time]. Like the sun and the moon, he must protect the earth through his policy. The king must formulate policy on the basis of sama, dana, danda and bheda [the four traditional means, respectively: conciliation or negotiation, bribery, punishment and dissension] and protect the earth. If he wishes to protect the earth, the king must follow the conduct of the five: Shakra, Surya, Yama, Soma and Vayu. For four months, Indra sustains the earth through his showers. Like that, the lord of the earth must nurture the world through his generosity. For eight months, Surya draws up the water through his rays. In that way, the king must collect taxes through subtle means. When it is the right time, Yama acts against both friend and foe. Like that, the king must be impartial in his treatment of the virtuous and the wicked, regardless of whether he likes them or dislikes them. The sight of the full moon fills a man with delight. Like that, when all the subjects are satisfied, the king has followed auspicious conduct. Secretly, the wind circulates among all beings. Like that, the king must use his spies amidst citizens, advisers, enemies and relatives. If the dharma of the varnas and the ashramas does not suffer in a kingdom, then that king obtains eternal happiness in this world and in the next one.’

But Alarka would not remain king forever. This teaching was about raja dharma and dharma has a time and a place. Madalasa also had something to say about the dharma that was beyond raja dharma.

I will explain that in the next column.