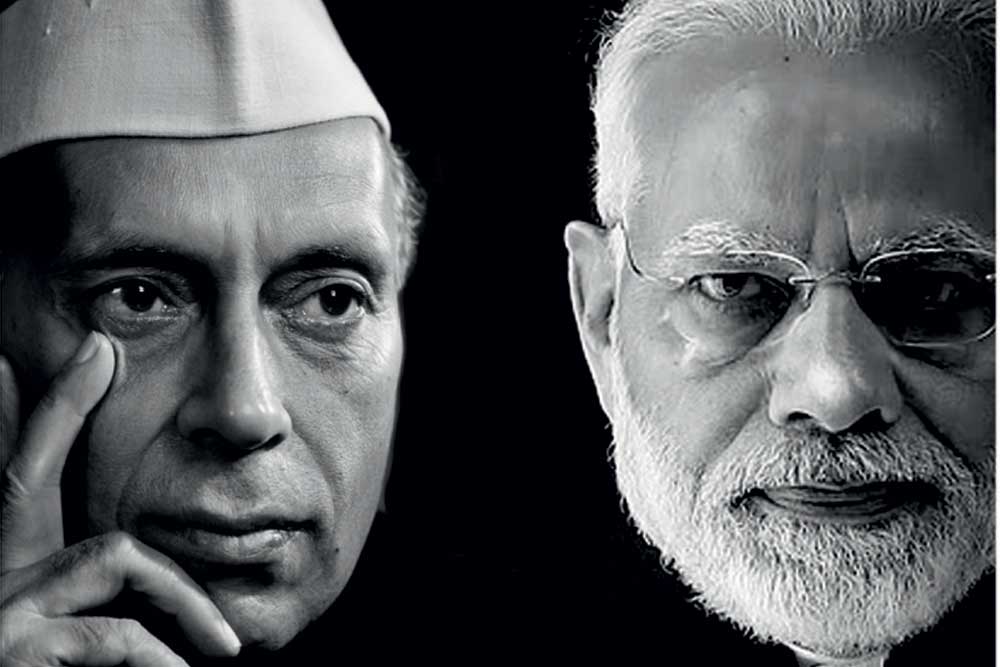 Teacher: You did! And?

Student: And I felt pretty wounded myself.

Student: Tell me, why are we reading him when it comes to trying to understand our past? He was not a historian, but a novelist and a travel writer.

Teacher: Naipaul was an unpleasant sort of person, I agree, but very perceptive, in his unique, acerbic way. He gives us an understanding of our past that professional historians fail to deliver.

Teacher: “History is too important to be left to historians”—a quote attributed to alternate history writer, Robert Harris.

Student: What is “alternate history”?

Teacher: Also called AltHist, it is a genre of speculative fiction. In Harris’ case, in Fatherland (1992), what if Hitler had won World War II? But the point is that if you leave history solely to professional historians, you risk the danger of being subjected to slanted and selected narratives, half-truths, or outright lies.

Teacher: Check out Arun Shourie’s Eminent Historians: Their Technology, Their Line, Their Fraud (1998) to get an idea. Or Meenakshi Jain’s Flawed Narratives: History in the old NCERT Textbooks—A random survey of Satish Chandra’s “Medieval India” (2000). The other side hit back, a year before Congress-led United Progressive Alliance came back to power, in History in the New NCERT Textbooks: A Report and an Index of Errors (2003) by Irfan Habib, Suvira Jaiswal, and Aditya Mukherjee. Incidentally, Jain’s report is published by the state-funded National Council of Educational Research and Training, better known by its acronym, NCERT, while its rebuttal is by the executive committee of the Indian History Congress.

Student: So, the political biases and the infiltration of the discipline of history by opposing ideological camps are obvious?

Teacher: The “history wars” unfolded, with each side marshalling its troops against the other. For example, also in 2003, the newly-appointed editor of the supposedly right-leaning The New Indian Express, published Plagiarised and Communalised against the rightwing histories. The publisher? Sahmat, founded by noted leftist Safdar Hashmi, who was tragically killed, allegedly by politically motivated goons. That book is impossible to find now.

Teacher: Certainly. Nehruvians become Modians, though there is no such word as the latter yet.

Teacher: But it has two i’s right in its middle!

Student: English will do that to you but it’s better than Modi-bhakt. But what, then, is the difference between history and fiction? Do you mean to say that history isn’t “true” and is as made up as fiction?

Teacher: Who says fiction is all made up? It hides, at times, truths deeper than supposedly factual and evidence-based narratives. That is because it sees into the soul of things. But it is now quite well-understood that history is also a form of narrative, although governed by professional protocols that are peer-enforced and quite different from those, say, of fiction. And yet, it has its plots, themes, heroes, villains, and ideological moorings, just like other narratives.

Student: Come to think of it, there’s no such thing as a “fact” pure and simple, is there?

Teacher: No. The word comes from the Latin factum, the past participle of an act. But an act doesn’t make sense unless you know its context, motives, causes, and outcomes. There is always something prior to a fact and something after the fact. Both are needed for facts to make sense.

In other words, history is the arrangement of facts and suppositions, according to some preconceived set of assumptions. That is what makes the narrative called history so powerful as an epistemic category.

Which is why Naipaul must be read seriously—even if he was not a historian in the conventional sense, he was far more perceptive in his understanding than most official or academic historians.

Student: Why is that?

Teacher: Because he had a theory, even philosophy, of history. As Gustave Flaubert, the great French writer, said, “What is important is the philosophy of history.” This statement becomes the epigraph of Part II, ‘The Narrative of Jacobus Coetzee’ of Nobel Prize winner JM Coetzee’s first novel Dusklands (1974).

Student: The “philosophy” of history is more important than history itself?

Teacher: Like Tolstoy, Naipaul helps us understand history— and what lies beneath and beyond it.

It is Naipaul who, after a long gap, teaches us to regard the Muslim conquest of India as imperialism, a conquest followed by alien rule, which Edward Said and others fail to do. Naipaul extends the scope of postcolonial studies, both its texts and methods. He also links the past to the present threats of radical Islam. His warnings came long before 9/11, even if he was wrong about the source of the contagion. It was from the heartland of Islam, where the religion originated, not in the converted lands that Naipaul covered in Among the Believers and Beyond Belief.


The ‘history wars’ unfolded, with each side marshalling its troops against the other. Nehruvians become Modians, though there is no such word as the latter yet

Student: More “unassigned homework” for me?

Teacher: Only if you really are interested, you could next read Among the Believers. It has a whole chapter summarising and retelling the Chachnama.

Student: What is that?

Teacher: The earliest account, rewritten and translated in the 13th century, from the purportedly lost “original” in Arabic, which tells of the conquest of Sindh by Muhammad bin Qasim in 712 CE.

Teacher: Nama means tale, story, history, epic—as in Firdausi’s Shahnama, the epic, sponsored by Mahmud of Ghazni, of the pre-Islamic dynasties of Persia.

Student: The same Mahmud of Ghazni who plundered India and sacked Somnath?

Teacher: He reportedly raided India 17 times from 1000 to 1027 CE. But he was also a great patron of art, literature, and culture. With the wealth looted from India, he made Ghazni, his capital, one of the most prosperous and developed cities of its time.

Student: But why was the earlier conquest of Sindh called Chachnama?

Teacher: What we called Sindh is named Chach in the text, after the Brahmin who supposedly ruled the area. I suspect that it is the Persianised version of Kachh or Kashyap, who probably also gave Kutch its name. Incidentally, Rishi Kashyap is also believed to be the founder of Kashmir.

Student: I must read the Chachnama.

Teacher: There’s also an interesting analysis of it by the Pakistani American scholar, Manan Ahmed Asif, called A Book of Conquest: The Chachnama and Muslim Origins in South Asia (2016).

Teacher: Haha! Okay, stay with Naipaul’s retelling of the story then. It is quite unputdownable. The fall of Hindustan is a story of palace intrigues, treachery, destruction, death, and enslavement, with the daughters of Dahir, the last Brahmin king, landing up in the Caliph’s harem.

Student: The conquest of Sindh in 712—and the raids of Mahmud of Ghazni 300 years later. These set up the fall of Hindustan when Muhammad Ghori defeated Prithviraj Chauhan in 1192.

Teacher: Yes. You might say it took 400 years and a lot of fighting, but Muslims ruled India, albeit not completely or fully, right until the 18th century, when the Marathas became the dominant power, for about 100 years.

Teacher: True. Most of our culture wars are fought over the interpretation of that period of so-called medieval Indian history.

Student: From what you’ve described,

these were long-drawn, pitched battles.

Both the real and the history wars.

Teacher: The latter went on for nearly 75 years, predating Independence and coming right up to our own times.

Student: How would you characterise this struggle?

Teacher: I would say that we saw a succession of dominant modes of history writing or historiography. From imperial historiography to nationalist, then nationalist to Marxist, which extends to the subaltern school, and finally, to Hindutva historiography, which is yet to be fully established.

Teacher: The history wars reached their culmination in the Allahabad High Court judgment on the Ram Janmabhoomi-Babri Masjid matter. Delivered on September 9, 2010, the judgment admitted of Hindu structures underneath the mosque. During the hearings, many Marxist historians were comprehensively exposed and discredited.

Student: The battle for Ayodhya was also a battle of competing histories?

Teacher: I think Hindutva won the narrative war. But after a long, fierce, and bitter struggle. Although Hindutva historiography is yet to be established on a firm footing.

Teacher: Looks inevitable. The struggle over Ayodhya is, of course, the struggle for India too. This brings us to the very heart of our dialogue on “Hindutva and Swaraj.”

Student: Which is to be continued in our next class?

Teacher: Indeed—with or without the (unassigned) homework!