The relationship between the secular everyday and the sacred perennial 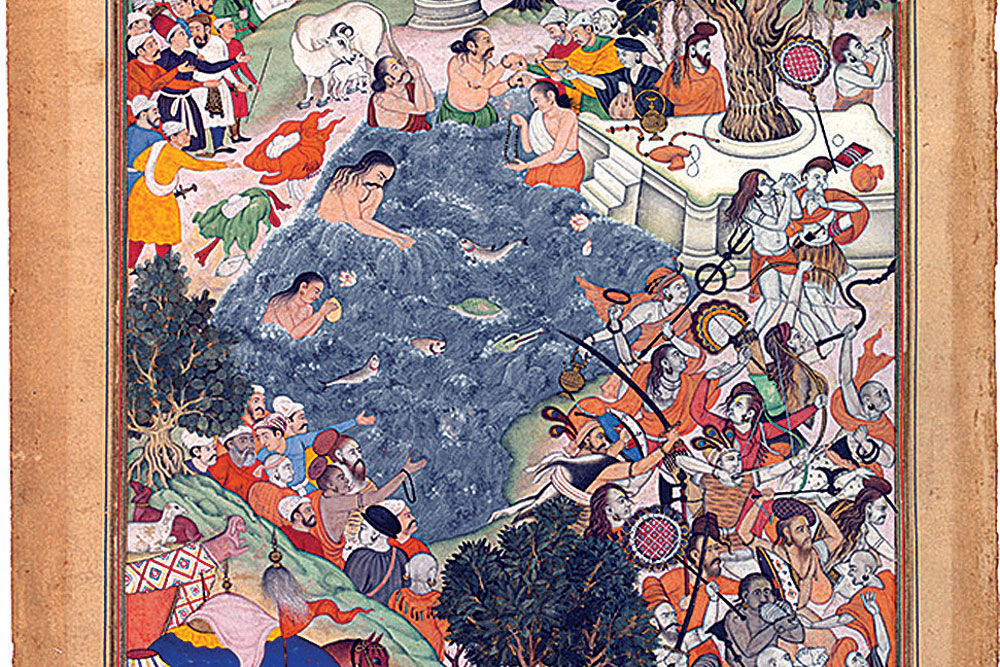 INDIA’S SACRED geography is a palimpsest of narratives in which the travelling pantheon and epics of the pan-Indian margi Sanskrit tradition meet, do battle with, and eventually intertwine with local deities, folk heroes, saints and tales told in the robust desi languages. This process brings about a confluence among Hindu, Buddhist, Jain, Muslim and Christian transmission lines, as well as embracing the practices of groups that an arrogant orthodoxy would consign to the margins of the caste system or regard as tribal communities.

Likewise, India’s sacred calendar encodes various histories of conflict, coalition and synthesis among different social groups and cultural systems. The clash between the cult of the fiery goddess and the cult of the monsoonal earth-god (later rendered by the victors as a buffalo demon) is recalled in seasonal festivity. So is the domestication, by agrarian society, of a forbidding guardian of the jungles, a creator of obstacles, and his transformation into a genial deity who wards off obstacles. And there is the ceremonial synthesis of the solar cult and the cult of the waters in such grand festivals as the four Kumbh Melas, held in varying 12-year cycles in Allahabad, Hardwar, Ujjain, and Nashik-Trimbakeshwar.

Of these, the Maha Kumbh Mela of Allahabad is the largest periodic gathering of people for a single purpose, far vaster than any diplomatic convention or contemporary arts biennial. The meticulous planning that goes into ensuring its peaceful and orderly passage is not readily obvious to readers and viewers who associate it with the Orientalist clichés that afflict most reportage of the event. Presented through the lenses of spiritual tourism or Indic heritage, the Kumbh is embalmed in the kind of photo-feature exoticism that plays up naked, ash-smeared Naga sadhus, the most dramatic among the millions of kalpavasis—pilgrims travelling across the centuries—who wade into the confluence of the Ganga, the Yamuna and the mythic, subterranean Saraswati, intent on washing away their burdens of error and sin.

What is not immediately evident to most is the precarious physical basis of this colossal festival. As though embodying the tension between samsara—the human world of effort, desire, achievement, failure, happiness and mortality—and pralaya—the cosmic cataclysm that closes every kalpa or cycle of existence, in the Hindu world view—the Kumbh is staged in the floodplain of the Ganga. Most of the 23.5-square-km location of the festival—described popularly as the nagri or ‘city’—remains underwater until a few months prior to the Kumbh. Eventually, after the festival has receded into memory and its vast infrastructure has been dismantled and dissolved back into the play of appearances, the water will reclaim the nagri.

Fully clothed engineers and bureaucrats do not make for sensational pictures or racy copy. Yet it is their invisible labour that goes into the making of what the German novelist and travel writer Ilija Trojanow describes as a ‘tentopolis’ in his account of a voyage down north India’s most sacred river, Along the Ganges (2005). Addressing the details that went into the making of this tentopolis for the 2001 edition of the Kumbh, Trojanow writes that ‘the Uttar Pradesh government divided the grey wasteland at the Sangam into 12 sectors. It laid out 450 kilometres of cables and 145 kilometres of water pipes; it paved 140 kilometres of roads, built 20,000 toilet boxes, erected 15 pontoon bridges and connected 5000 telephones. The organisation was impressive: 6000 garbage-men collected the waste; the roads, consolidated with sand sheets, were sprinkled every night; thousands of volunteers maintained daily order’.

Might the deep symbolic imagination from which this grand festival, the Kumbh Mela, emerged still have lessons to offer our collective life as a society

Engaging with the next edition of the Kumbh, the architects and urbanists Rahul Mehrotra and Felipe Vera dwell, in their 2017 book, Kumbh Mela, January 2013: Mapping the Ephemeral Megacity, on the infrastructure grids that keep the nagri functional and operative under potentially overwhelming pressures. By 2013, the nagri had 14 sectors, each conceived as an ‘independent and almost self-sufficient unit… Some sectors, like sector four located near the Sangam, are more socially active and culturally relevant while other sectors, such as sector eleven, which is located more in the periphery, serve as logistical nodes or transportation hubs that receive the city’s provisions before they are distributed across the grid’.

And while the mention of a grid might summon up tedious associations of Corbusier-style monotony, Mehrotra and Vera observe that the idea of the Kumbh enshrines an interplay between camp settlement and open space, rigour of organisation and spontaneity of expression: ‘[T]he temporary condition of the Kumbh Mela space does not remove individuality, which ultimately provides for the construction of several identities within the city. One example of this sort of originality is on display in the form of the gardens created during the 44-day duration—they provide a temporary yet personalised aesthetic in the face of the fact that the ground in which they are planted will be flooded again.’

It is useful to remind ourselves that the modern-day Kumbh does not form itself automatically in consonance with some millennial mandala, and that it is purposefully shaped by a scientific and technologically oriented organisational imagination. Having said that, might the deep symbolic imagination from which this grand festival emerged still have lessons to offer our collective life as a society? The Kumbh Mela reaffirms the relationship between the individual self and its larger natural and cosmic contexts, the secular everyday and the sacred perennial. The ritual of lustration, the so-called ‘holy dip’—admittedly in what is today, alas, a river polluted almost beyond redemption—represents the self’s return to the waters of birth and regeneration, the restoration of a balance between individual agency and ecological equity. This balance has been destroyed as much by the uncritical celebration of industrial progress as by the pathologies of caste and gender asymmetry, as much by the violent politicised religiosity enforced by the Right as by the dogmatic secularisation favoured by the Left.

I have written, elsewhere, of three momentous symbolisms that lie at the core of the Kumbh pilgrimage paradigm: those of the tirtha or crossing, the sangama or confluence, and the manthana or churning. As a tirtha, the waters of Allahabad/ Prayag act as a bridge between the secular realm of worldly goals and social relationships and the sacred realm of self-overcoming and un-worlding. Each sustains the other. Our secular experience is given shape, meaning and direction by the awareness of contexts that lie beyond words and strategies. Meanwhile, our spiritual longings gain purpose by contrast with the unpredictability of worldly life.

As a sangama, the confluence of three rivers celebrated in hymn, song and story over several millennia at Allahabad/ Prayag embodies the weaving together of three separate impulses into a fourth newness that is greater than the sum of its tributaries. Sangama suggests that it is through the combination of heterogeneous elements, and not through an imagined purity, that we can best replenish ourselves.

If left alone by the forces of the Right, the Kumbh does not embody a unified, homogenous ‘Hinduism’. Many of the akharas or schools of ascetics who participate in it are distinctive in their choices of doctrine, ritual practice and route to illumination. In previous centuries, some of them have engaged one another, not merely in philosophical exchanges, but in bloody warfare. Historically, the Naga, Gosain and Bairagi sanyasins were armed and belligerent orders, their places of retreat more akin to garrisons than to monasteries. And yet, carried along by the dynamic of manthana, the oceanic churning together of millions of people, these traditional antagonists lose the hard edges of their separate identities to blur—however transiently—into a celebration that is intimately real to each, yet greater than any of them. A model for us, of a possible reprieve from the bitter resentments and savage antagonisms that increasingly define our collective social being?