Who’s Afraid of a Caricature? 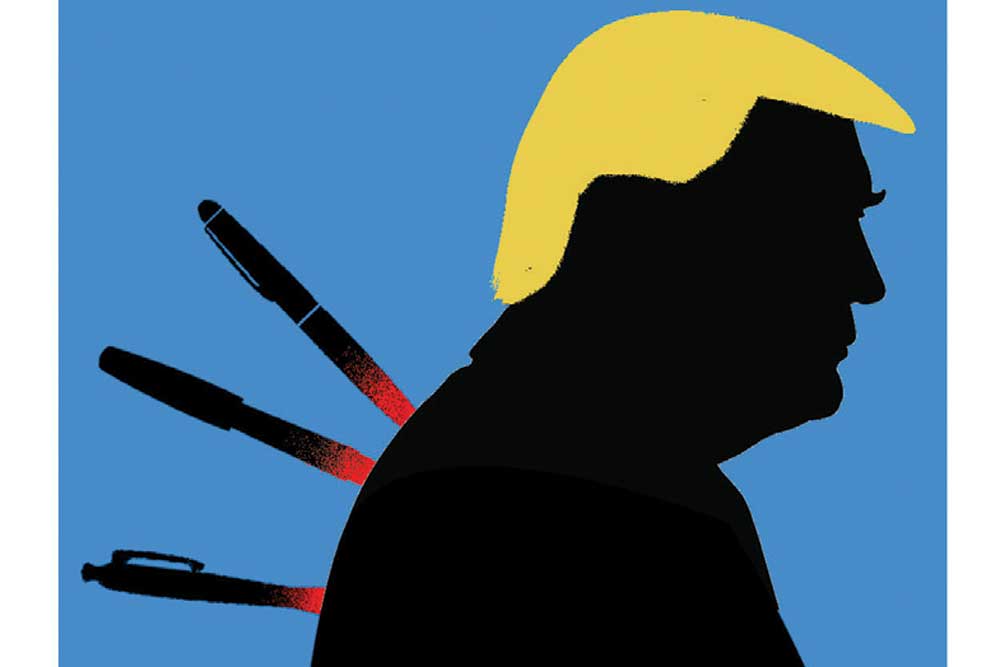 IT WAS A daring instance of breaking away from the Brahminical consensus of self-reverential media when the Spectator magazine found some virtue in Donald Trump. It wrote in an editorial: ‘Among the many new political maladies of our age, one has been left largely undiagnosed. This is Trump Derangement Syndrome, a condition whereby the intense dislike of the 45th president renders sufferers unable to understand what he’s trying to do or allow that he is capable of success.’ His success, the magazine argues, ranges from a growing economy at home to stirrings of peace in the Korean peninsula, from bolder tax cuts to a fallen ISIS. He may have lost the media, but not the ‘deplorables’ yet, and, in spite of the crassness of his messaging style, his tweets serve the purpose. They take him to his farthest audiences who are not conditioned by op-ed pages.

The Trump problem is more a crisis of aesthetics than an imminence of madness, as made out by volumes with such ominous titles as The Dangerous Case of Donald Trump, or by the dire warning of the National Coalition of Concerned Mental-Health Experts: ‘Pressure makes unstable people worse. Collectively, we warn that the worst is coming. Anyone as mentally unstable as this man simply should not be entrusted with the life-and-death powers of the presidency, and the public deserves protection.’ The world is in serious danger, and its name is Trump—or so say people who know better than the ‘deplorables’.

The crazy presidency becomes a theatre of the abominable in Michael Wolff’s Fire and Fury: Inside the Trump White House (Little, Brown). Falstaff is king here. He goes to bed with a cheeseburger in hand, and gossips about his own staff and family with his phone pals—the most cathartic moments of the president. In his White House, it is permanent war between all the king’s men and women, among them the dishevelled national populist as ideological guru, the daughter and son-in-law as liberal moderates, the generals who bore the president to death, speechwriters who cannot write a sentence, Wall Street careerists biding their time, sympathetic media moguls fed up with the idiot president, and people still queuing up to be hired and fired. In the Trump world, ‘the emperor has no clothes’, and, strangely, the courtiers and the ‘geniuses’ (the president’s description of his detractors) want him to remain naked. And everyone, including the king, is a potential Deep Throat.

It is generic insider literature, and American journalism has perfected it. Wolff’s thriller has become a vindication of the mad-Trump-danger we continue to read about on the otherwise restrained pages of liberal newspapers. Apart from its entertainment value, what this book achieves is something else. It dramatises power, even exaggerates it, not as an ideological expression but an individual eccentricity—de-intellectualised, visceral, emotional, impulsive, iconoclastic, and still appealing to the base. Trump does not read books or briefs. He does not listen. He does not write anything more than his frenzied tweets. He watches television. He watches people. He looks up to the Murdochs and others who have made more billions. He struggles to be loved, respected. He has built up a moral system of comic-book complexity where the petulant king is a lone figure of grievances and fantasies. Still, he represents an idea, a movement of resentment, a revolution of sorts, and for those who still care about it, the idea is bigger than the man himself.

Hence the refrain: how can Trumpism be saved from Trump? It is a travesty of a familiar conundrum: the revolutionary devours the revolution. In today’s America, it is a sight that evokes only derision. Steve Bannon, currently in the doghouse, saw himself as the chosen flag bearer of a nationalist uprising that was destined to uproot the liberal order. Bannon, the unwashed ideologue and elite-slayer in Wolff’s caricature, was increasingly coming to the conclusion that Trump was unfit, temperamentally and intellectually, to sustain the revolution. In the history of revolutions, conscience keepers are destined to end up in the gulag, and Bannon would earn his.

Is it always the wrong men who come to harvest the dreams and disillusions of a people? Candidate Trump, an all-American monster created by the media Frankenstein, by placing himself outside the world he belonged, and by voicing the fears and anger of those who resented the culture of entitlement and entrenchment in an unequal society, became the unlikely outsider set against the establishment. That was not a joke. The president, as in Salman Rushdie’s novel,was fast becoming a joker. In the past, the First Revolutionary became a terror;in the age of cable television and social media, he is a piece of pornography whose narrative span is one hundred and forty four characters.

Rarely do we get leaders who are worthy of the ideas they have unleashed.