The Presence India will miss 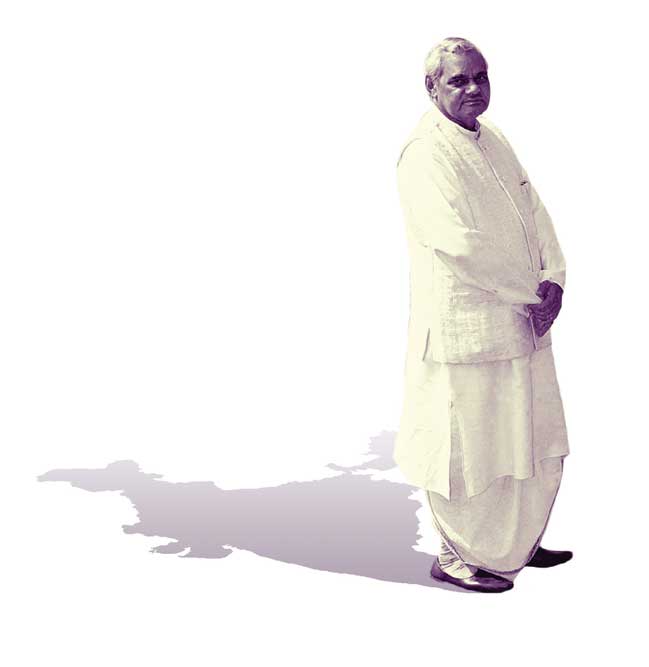 ATAL BIHARI VAJPAYEE died at a time when nations were too engrossed by the theatre of revenge to return to the back-pages of gentle leadership. As he lay there, beyond the intrusions of headlines, the stage outside was occupied by idyll- breakers and fantasy hawkers. He died at a time when the disruptive power of a new leadership of grievance was at its peak. We have lost the calmer version of the national retriever.

While in power, he was the face of an awakening, an argument, a rejoinder to the Congress century. India had turned right, and the overwhelming motif of the winner’s story of struggle and eventual freedom was ‘demolition’. When the story was retold, he was not the hero who dared. He was not the mobiliser. Not the Hindu nationalist who played out gods’ script. Not the one who walked the longest distance in victimhood. Not the one who watched the dome fall from a vantage point. When the story was retold, some of them found that the one who gained the throne was not the true representative of the struggle. Not the street fighter of Hindutva.

In power, he became a different story of consolidation and consolation. He became the sobering manifestation of a legacy of anger. It could have been a continuation of the anger, of the rage against tormentors from a cruel history that made Vajpayee possible. It could have been the next phase of that nationalist struggle, an extension of the campaign, had it not been for him. After all, the victory, for some, was not the end of the ordeal, or a final resolution, but a mandate for re-mobilisation. Vajpayee brought serenity.

The reborn Hindu nationalist, in his book, was not the Hindu nationalist re-armed, with a mandate for extreme culture wars. Unsurprisingly, the action heroes of the Hindu cause found in his stillness stagnation, in his lyricism an evasion, in his pauses a hesitation. Perhaps his mind was beyond the comprehension of the permanently rancorous Hindu nationalist. He rewrote the terms of power, and reconciliation was its edifying character.

In the book of Vajpayee, power was conversation. The winner made the losers as well as the bystanders a part of the engagement, and such generosity was rare in Indian politics. The assertion of the nationalist did not require the metaphor of a trident but a double-edged couplet from the poet-Prime Minister. It didn’t require a hate speech of the my-India vigilante; it could just do with the prosody of an our-India philosopher king. Vajpayee brought a new aesthetics to power.

That was a cultural shift in a country where assertion, no matter Mandal or Mandir, was pure kitsch. Whether it was the class struggle of the communist who sought his last soviet in Malabar or the discredited socialist who played out the politics of justice or the vaudeville of the Dravidian on a cardboard stage, it was kitsch that kept the mass mind hooked. If the first Prime Minister without a Congress ancestry, and brought to power by Indian politics’ strongest expression of resentment, had a name other than Vajpayee, it would have been a different story, the same story of the wounded and the vandalised still marching for justice. Vajpayee abhorred the dramatics of power. Power flew from a poem.

And being powerful didn’t mean being paranoid, afraid of shadows. The more he began to soar above the mundane, the more he exuded power without intimidation. When the moment demanded the eloquence of a Cicero, he took a pause. When it required only a perfunctory sentence, he played Cicero with such natural flair that even the victims of his words admired his grace. He left the smaller details to an independent cabinet; he painted the bigger picture to perfection. It was he who brought an official end to India’s anti-Americanism, thereby redeeming us from the mental ghetto of Third Worldism. And it was he who showed the world that a nuclear test was not a sign of nationalist madness. Still, he was not the action hero of Hindutva. Vajpayee in power gave passivity a philosophical edge.

He was the Presence.

We miss it because: In this era of disruptors, the leader who rejects extremism and rises above the immediacy of political returns alone can provide stability; when most disruptors evoke only fear or admiration today, we look for a leader worthy of our emotional investment; when politics hurts, we long for words that heal; and as pontificators pollute the atmosphere, we badly need a comforting conversationalist. We miss him because the bad behaviour of politics has to be undone by the old decencies of public life.

We miss the Presence.