The Redundancy of Che Guevara

The revolutionary has lost everything but the T-shirt 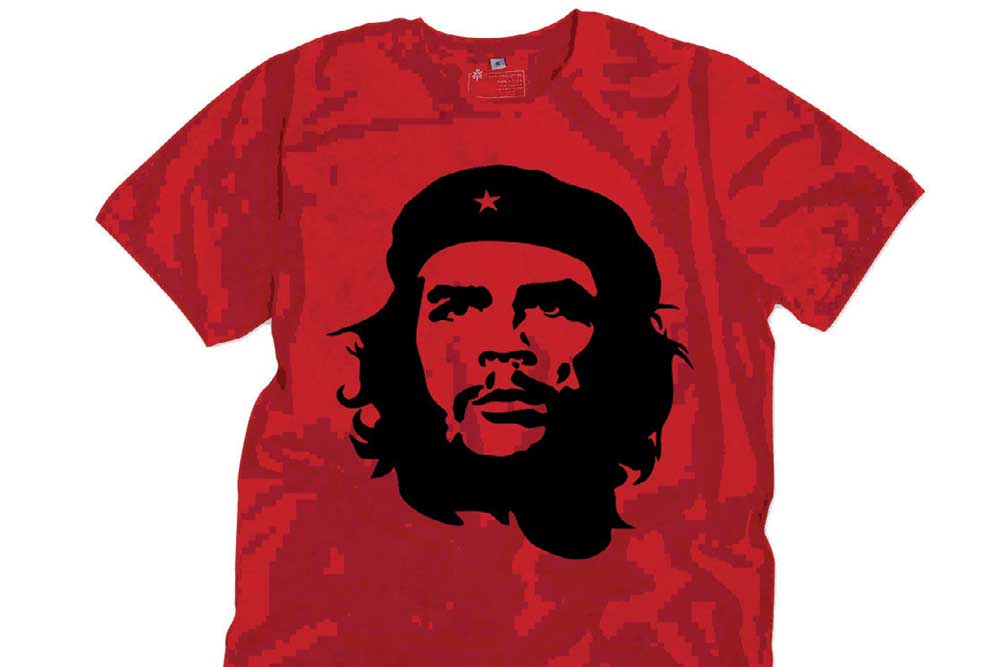 FIFTY YEARS AGO this month, a day after he was captured by the Bolivian army, Ernesto ‘Che’ Guevara was shot dead, with a CIA agent as witness. Then they lied. As Jon Lee Anderson writes in his majestic biography of the revolutionary, ‘After announcing that Che had died in battle, the army displayed his body to the public for a day in the nearby town of Vellegrande. Photographs were taken of the shirtless, bullet-riddled corpse. Che lay on his back with his head propped up, his eyes open. A resemblance to image of the dead Christ was apparent to everyone. That night, Che’s body, and those of several of his comrades, vanished.’

They didn’t want a new religion to be born.

Mario Vargas Salinas, a retired general who as a young officer was involved in the operation against Che, would tell Anderson that ‘Che was killed, his hands were amputated. Fingerprints were made to preserve physical proof of the body’s identity, and the hands were placed in formaldehyde and hidden away. Then a nocturnal burial guard, which Vargas Salinas was part of, secretly dumped the bodies of Che and several of his comrades into a mass grave.’

After thirty years of denials and deception by the Bolivian military, a Cuban-Argentine forensic team discovered the remains of Che. ‘The skeleton lay together with six others at the bottom of a pit dug under the Vallegrande airstrip… Che was stretched out full length at the base of the pit, face up, as if special care had been taken in laying him there… Che’s hands had been amputated at the wrists.’ Finally the ‘Heroic Guerilla’ would get a home in a mausoleum in Santa Clara, the Cuban city which is a landmark in the legend of his conquests for freedom.

The Che chic is still alive in the iconography of popular culture, mostly on cheap T-shirts in desperate streets in search of some kind of—any kind of—validation. That photograph by Alberto Korda, a bearded Che in his black beret, his gaze fixed on a distant revelation, is perhaps the most shared intimacy of a revolution. The original romance was pure Latin American machismo, and Che, unlike his comrade-in-arms Fidel Castro, found no resolution in the end of the revolution. There was only a pause, and he refused to be imprisoned by power, or swayed by the Soviet Union. Freedom was a permanent struggle, Authority was a fickle imposition, and revolution a private affair, too. ‘Sexual intercourse began/ In nineteen sixty-three,’ wrote Larkin.

Che was the necessary zeitgeist icon, and in Latin America, the cult of the liberator continued to be sustained by dictators, imposters and pure romantics. The original liberator, in his autumnal isolation, as imagined by Gabriel Garcia Marquez in The General in His Labyrinth, was a man lesser than his historical size, his delusions of freedom and unity collapsing around him as he lay floating in delirium. The legacy of Simón Bolivar had many takers, and all of them could have been straight out of the pages of Marquez or Llosa. Castro kept the aura of anti-imperialism, but, as he lay dying after the longest innings as a revolutionary in power, Cuba still remained one of freedom’s ‘poorest’ examples. Chavez too marinated his anti-imperialism in ultra-nationalism, and wanted to be a Bolivar and Che and Castro rolled into one. As the power of the chosen one evolved in Latin America, it ceased to be magical realism. It was just comic strip. Or a horror show starring Chavez’s successor Maduro.

Che has lost everything but the T-shirt.

In the history of revolutions, the logical conclusion of romance is unfreedom. Che’s relevance today is confined to the preservative power of formaldehyde. One man’s loftier sense of justice did not result in lands with justice. It set in place ideal conditions for the calcification of ideology and the repudiation of democracy. Every dictatorship attempts to gain legitimacy from a historical memory, one of struggle against power. Every tyrant traces his bloodline back to a martyr. That is the paradox of the anti-colonial—or anti-imperial—movement. Che, too, can be an invocation in the cruellest places. A great individual saga has survived time only through mutation.

Maybe the revolution has migrated from the jungle to the desert, the balaclava has replaced the beret. The new revolutionary wields the knife, hovers over his enemy, all set for video jihad somewhere in the Levant. Che, with his Jesus look in the souvenir shop, is harmless.