The India of Mohan Bhagwat 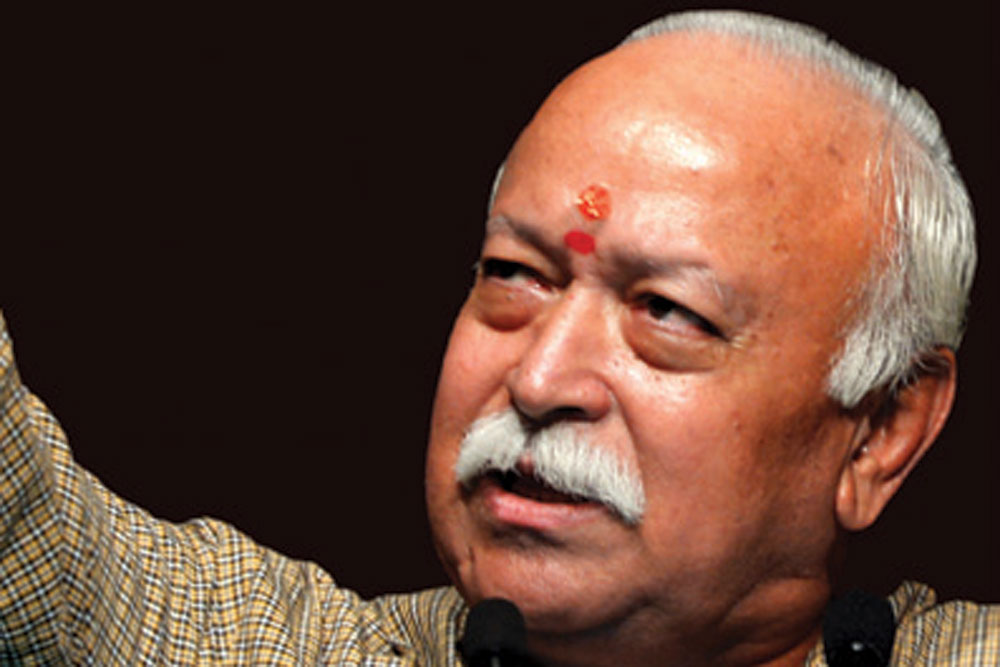 THE INVITATION ITSELF marked a cultural shift only if you were one of those who saw the RSS as a subterranean apparatus that practises the dark arts of Hindutva, the evil power behind the equally evil throne in Delhi. And in a certain genre of secular storytelling, it is the unipolar vision of the RSS that makes the idea of a Hindu Imperium a chilling possibility, and a Final Solution inevitable. Even the mainstream politics of selective secularism borrows from this casual style of storytelling that reduces history to a series of lazy soundbites, easily adaptable on the stump. The invitation to a three-day lecture series on ‘Bharat of Future: An RSS Perspective’ by the organisation’s supreme leader Mohan Bhagwat came at a time when the alarmists of India Endangered were at the peak of their shrillness. So there it was, the shadowy beast coming out in the sun, with see-me, know-me confidence, and even aficionados of scary tales were invited, but I was told none of them turned up. Anyway, it was live on television. The RSS sells.

At Vigyan Bhawan, the venue of the lecture series, I wondered whether there was any cosmopolitan non-believer who missed the Maha-Bharat kitsch. If he was looking for the aesthetics of the Neanderthal Hindu, there was none. It was all matter of fact, with clockwork precision. In Delhi, there’s no event that starts on time, but here was one—and you could imagine the suppressed sigh of the cynic: Oh, the exactness of power. You could access the English translation of the speech, but my headphone did not work, and then again, I could hear the sigh of the cynic: That was a just a promise, silly, the Hindu Rashtra can be told only in Hindi.

The speech itself was more professorial than evangelical. Bhagwat was not there to “convince” anyone; he was there to “explain” the future. In the received wisdom of those who don’t have the patience for understanding—let alone listening to— the other version of the story, even if it’s an archaic version, explanations were not required; it was a horror story prewritten by modernity. So who cares? Bhagwat’s explanation was a sober reassertion of what his organisation intends to be in the age of nationalist re-imaginations. He felt no need to be apologetic about the only adjective India can afford in its self-expression. So Indianness is an Anglicised word for Hinduness. The Hindu Rashtra was not anti-Muslim. It was not tomorrow’s Hindu Republic of India. For Bhagwat, Hindutva is an inclusive idea of national identity.

When you were listening to his speech, you just realised how the world, perhaps the world of Viktor Orbáns and Matteo Salvinis, was catching up with the ideas and attitudes of Bhagwat. In the high noon of globalisation, the world is taking an inward journey—call it the rite of nationalist self-realisation or whatever. The question—Who are we?—first asked after the implosion of the post-Soviet Balkans, is back, frightening immigrants and internationalists. The new nationalism, spotted in Eastern Europe or middle America or even elsewhere in Lutyens’ Delhi, is a child of neo-nativism. He may have a global mindset, and he may be a globetrotter, but he is not a global citizen. He may be the poorest of them or the most privileged of them, but he finds no difference between having a sense of the nation and a sense of belonging. He feels he has been let down badly by the Left and the Right. He feels good when he wakes up to a world that is still familiar, and when the neighbourhood looks the same. He abhors upheavals. The neo-nativist is a worshipper of the familiar.

The familiar, as Bhagwat said in so many words in his three-part lecture, is the Hindu identity of India. He doesn’t want a dispute over it, for there is nothing disputable about the civilisational heritage of India. There is nothing contestable about its Hinduness, which has—and this is important—no communal or religious connotation either. For Bhagwat, the past is not a disputed country, which makes the project of India’s future easier for him. And that is why a temple for Ram in Ayodhya will not be a shrine of division but of unity—of Indianness. It is more than a religious enterprise; it’s a cultural necessity. It’s not political; it’s about being Indian. And by that, he means it’s not anti-Muslim. Bhagwat’s RSS wants to revive a truism: unity in diversity. Its new reading: unity is Hindutva. He asks: can a temple of unity ever be an object of dispute?

What we get from Bhagwat is more that a vision statement for India in the age of Narendra Modi. He says the RSS is detached from the Government of the day. Maybe he is playing prophet to Modi’s pragmatist. Maybe, together, they maintain a balance between ideas and action. Be a bit more ambitious, Bhagwat tells those in power and those who are listening, and let it be not India First, but India Eternal.