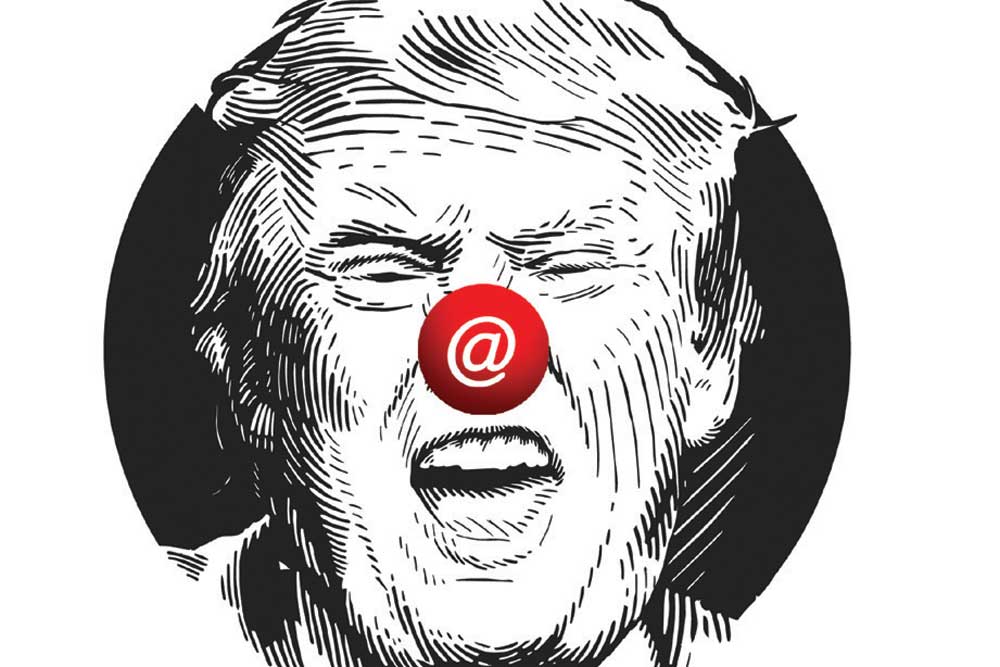 IT’S AS IF the leader of the free world is a badly imagined dictator from a Latin American novel of a certain vintage. As he whines against the press, history and other demons lurking in the shadows in his midnight solitude, all in the compelling incoherence of one hundred and forty characters, power of the most powerful is reduced to a pathological pastiche. A collateral casualty is language, and in the case of Donald Trump, or, to be specific, @realDonaldTrump, one day it’s possible that Barthes and Eco may be applied to get the meaning of the man and his mind we seem to be missing in our ridicule today. It may not be all fake news. It may even survive the revenge of the meme.

Till then, it’s pure ‘covfefe’.

It began in the first minutes of a Wednesday morning in the White House. As the world slept, the President looked at himself and his smartphone sighed: ‘Despite the constant negative press covfefe.’ It hung there in twittersphere, as an aside abandoned by a tragi-farcical hero. They sought meanings, invented and imagined some, and searched the presidential mind as well as Merriam Webster for motives and metaphors. It spoke of the power of the First Words, and the lonely delirium of the First Citizen. Then, as the world lost its moorings in a spelling error, the president returned, on the sixth hour of the day, wondering in unintended philosophical abandon: ‘Who can figure out the true meaning of covfefe??? Enjoy!’

That said, this column is not about the word that shook the world. It’s about leadership that shakes the world for all the wrong, bizarre reasons. Trump is still a bad work in progress. His episodic presidency has become the most inelegant expression of how a man who once personified the outsider’s struggle for redeeming power from entrenchment and entitlement could become a parody of his campaign, which itself had verged on the pornographic at times. On the stump, ‘despite the constant negative press covfefe’, he was the starkest manifestation of a social movement against a class that claimed permanent copyright over power. In other words, he led the war on Hillary Clinton, and, despite his billions, reaped the anger and resentment of Middle America, abandoned by the traditional Left. The imperfections of Candidate Trump were more tolerable than the imperious contempt of the liberals towards the parvenu. Here was an underdog that fed on its own fantasy. There was no paradox more overwhelming than Candidate Trump.

The world of President Trump is never bigger than what he sees in the mirror. The world’s most powerful elected official behaves as if he is a prisoner still waiting for justice. He may have arguably the most hostile press in American presidential history, but that doesn’t explain the ignominy of the president as his own tabloid, raging against the unfair lot out there. He presides over an incomplete, chaotic administration, and the world he surveys is one he hardly comprehends. Echoing the Cold War fairy tales, his world is inhabited by Russian spies and enemies within, and the most uncharitable joke is: Is the president Putin’s plant? And there are already talks about The Madness of King Donald and the distant possibility of impeachment or the invocation of the 25th amendment. It’s not 200 days in power yet.

This portrait of the presidency as a freak show is not entirely true. It’s what we in the echo chamber find real. It’s only partly fake reality, and Trump is in no hurry for redemption. What it tells us is an old story about the struggle—the romance of it— and the grotesquery of power. In another age, the historical sweep was grander when the revolutionary played out his liberation script. Once in power, it was the banality of terror that characterised him. Today, in the age of the populist, revolution is free of ideology. It is provincial, and its ambition is smaller. The headquarters the new revolutionary wants to bombard is the political centre of exhausted ideologies. The flip side of populism is that its prophets are invariably neophytes and fantasists, and, being unrestricted by organisations, they are solitary insurgents swayed by righteousness. The winners among them are narcissists in power: A Trump there, a Kejriwal here. They are lone men who, as outsiders pitted against the totems of realpolitik, realised the uses of resentment. In power, they need the pleasure of being persecuted by phantoms. And as administrators, revolutionaries of populism find it impossible to accept the structural constraints of governance.

Politics today is too volatile to follow the safe instincts of the conventional—or professional—politician. Still, the winner of a world that is angrier than ever is not the populist who writes his fake memoirs in tweets but the outsider who reimagines the future without breaking the conventions of ethics and decencies.