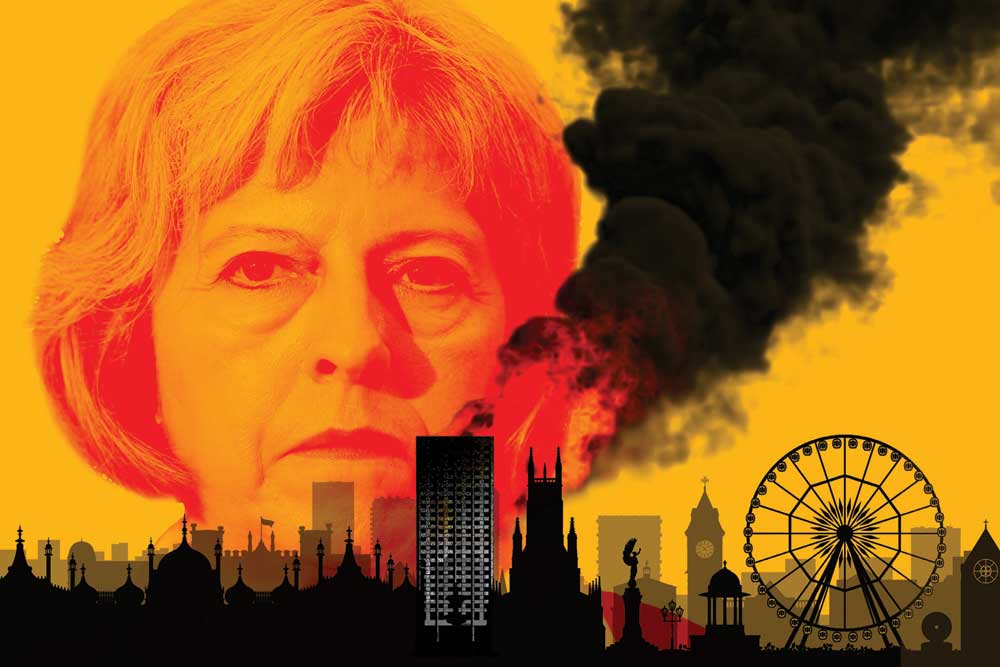 BRITAIN HAS SURVIVED its worst heatwave in four decades. As a national calamity loomed, there was one hapless woman who could not take her deckchair to the nearest park. She had to endure a concrete oven as the temperature soared to 34º C. The ordeal of Theresa May was not merely metaphorical. She is a non-leader trapped in her own frailties. The sun may not stay so severe for long, but the carbonised skeleton of a residential tower in London’s richest borough will never cease to emit heat. The charred remains of Grenfell Tower in West London vindicate a truism: when it comes to corruption and a disregard for human lives, every World is Third.

The tower housed the poorest in an area of affluence, and the toll is likely to be higher than the official figure of 79 as several are still missing. If inferior, inflammable materials banned elsewhere were not used in its external cladding, and if the local council and builders functioned with transparency, lives would have been spared. The inferno brought to sharp focus deeper resentments and divisions in politics and society, and I would say a May singed by the embers of the tower was a sight that pleased only the purveyors of a class war, among them the newly armed acolytes of the Labour leader Jeremy Corbyn. What she lacked was spontaneity, and camera-friendly emotionalism, particularly so when her opponent was natural in hugging the relatives and sharing their sorrows. May just spoke to the firemen. The vicar’s daughter was a stuffy English matron, while Jeremy was your neighbourhood uncle with a handkerchief. Even the Queen was more human. May had to issue a mea culpa, but the stigma still remained.

It is as if even the fiercest sun can’t remove the dark smoke of the tower tragedy. What stands brighter than ever amidst the gloom is cosmopolitan London’s ideological medievalism. Corbyn, playing his Uncle Che role to perfection after the General Election boost, invoked Dickens—better than Marx!—to tell the tale of two cities. Fair enough. Then he issued a call for ‘occupy empty luxury homes’ to accommodate the homeless. That was revolutionary. Soon, the spirit of Jeremy would be written across placards: Murder, man slaughter, genocide…. And certainly, it will be echoed by all the good columnists appalled by the evils of capitalism. I had my Pravda moment when I read a column in The Guardian quoting Friedrich Engels to enlighten me on the sociology of the inferno.

Are we being told that globalisation does more than just bring us Brexit and Trump but sets the ghettos in the sky on fire? Grenfell was an avoidable horror, and it was a result of corruption and bureaucratic obfuscation. And the ‘march of rage’ brought out the social conscience of a city. The missing words from the screeds of rage were obvious, though: wages of the welfare state. They say the local council kept the poor in painted hell, lest they mar the landscape. Still, the poor are better off in a capitalist society, even in the time of austerity. In her manifesto, May promised to cut the welfare state down to size. Today, desperate to remain in office, and not in power as the saying goes, she is keeping it intact. When on the brink, even the conservative has no choice but to be a socialist. The only good thing to come out of this ideological zigzag is the news that the dispossessed will be housed in apartments acquired in the same posh borough. It has always been the case: it’s not the slogans of socialism but the conscience—or is it the guilt complex?—of capitalism that makes poverty bearable in countries like Britain. It also keeps Corbynistas suitably enraged.

May is too fickle a leader to withstand the rage. She does not have a script of her own, and like the crypto-Marxists across the aisle, she has no ghosts to invoke. So it’s not the sins of capitalism that add to the stifling summer of Britain. It is the absence of leadership. May aspired to be larger than her inherited political size. The election has made her smaller. She discovered her own redundancy at a time when conservatism badly needed a post-Thatcherite Thatcher. This crisis of political legitimacy is not entirely English. The backlash of populism has given birth to deformed children of legacies abandoned by the establishment. The party that was once home to the likes of Lincoln and Reagan has its mascot in a Trump today. May didn’t have the so-called vision thing to become the second lady with iron in her political soul. She is a passing shadow in a power vacuum.

Britain feels this absence of leadership at the worst of its time. Two terror attacks within less than a fortnight heralded May’s election gambit, and Britain did not stray from the national motto of keep-calm-and-carry-on in a season of fear. The motto was intact even when almost every other radical Islamist group opened shop in London and elsewhere in the Kingdom. It’s still a favourable place for playing out the diversity of incendiary faith. And it’s still political correctness and media-friendly pieties that characterise the responses to terror. It was all the more evident in the face of the counter-terror attack on the premises of a north London mosque. A lone middle-aged White male drove a hired van into a crowd of worshippers, killing one and injuring many, and he provided the ideal alternative narrative on hate to liberals. “I’m going to kill all Muslims,” the man reportedly said. “I did my bit,” he added. Was it White terror or Christian terror? One could not fail to see the subtext of schadenfreude some felt at the birth of a new terrorist. It reminded me of the debate back home over Hindu terror. And this time, May was very human and intimate as she mingled with community leaders and victims. She didn’t look reassuring, as leaders should when a nation needs answers and authority. It was a desperate woman in search of a perfect photo op. It was the genius of leadership that made the aftermath of World War II and the fall of the Berlin Wall new beginnings in the history of freedom. Today, the originals are elsewhere, but history is not less dramatic.

POST SCRIPT: The existential anxiety of being alive looked leaner at Tate Modern where the sculptures of Alberto Giacometti (1901-66 ) are on display. His elongated men and women in bronze are a visual variation of what his friend and interpreter Sartre had written in Being and Nothingness. In post-War Europe, Giacometti’s ‘search for the absolute’—Sartre’s words—brought in starker stillness the isolation and alienation of a people. Between our gaze and his figures, as Sartre realised then, lies an absence that accentuates the fragility of human existence. In a city where the looming silhouette of a ghost tower is the image that captures its conflicts and conscience, a return to Giacometti is not a diversion but an illumination.