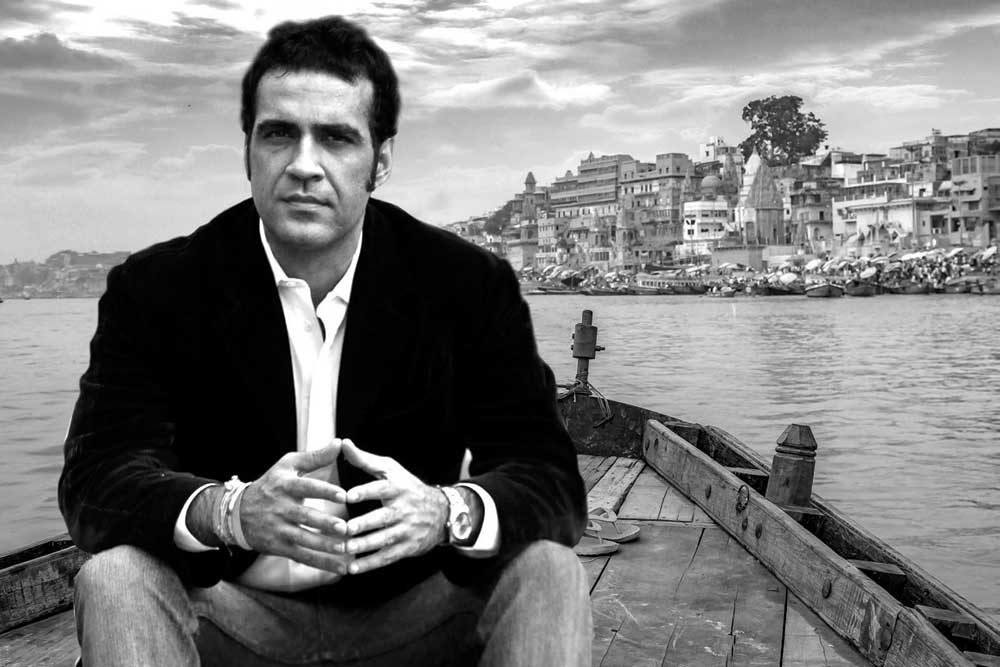 STILL A STRANGER IN HIS TRAVELS, Aatish Taseer has not abandoned his wonder—or his argument. India for him is an exhausting intimacy. A pause he craves, and an unfinished sentence to which he returns, again and again. Its stories are antique, its sighs are eternal, and as an idea he is not certain whether it is all movement or just stagnation. It is this traveller’s sense of awe and anxiety that makes his journeys discoveries of the mind, and his stories are mined from conflict zones of the present and the past.

He is in Benares, which still remains a favoured destination for travellers in search of civilisation kitsch. The oriental mystique, in its elemental diversity, is intact. Taseer is not a nirvana junkie. It’s not the exotic that excites him. He is here in search of the Brahmin, the twice-born, and, one late afternoon, he finds him, the twice-born, in the Abhinavagupta Library: ‘Inside, the Brahmins filed into the room, some bare chested, some with foreheads emblazoned with caste marks. I had known Brahmins all my life, but I had not known Brahmins like these. The Brahmin, who sits at the top of the Hindu caste system, is ‘twice-born,’or dvija in Sanskrit, for he is born once at the time of his actual birth, and then again when he is initiated by the rite into his ancient vocation of the mind. The Brahmins I knew had not undergone this second birth; they were Brahmins in name only, and the life of tradition in a place such as Benares was as closed to them as it was to me.’

It is a revelation as Taseer listens, and soon, it will be an initiation of the outsider, still mesmerised by the intellectual purity and possibilities of tradition even as he is appalled by the stalled mind of the present. In the library, he listens to Brahmins arguing in Sanskrit over sphota, or word seeds, the relationship between sound and meaning. ‘I had never heard of the concept. I knew no Sanskrit. I did not know that ancient India had made a study of these things. I was ignorant of the Indian passion for grammar, linguistics, and hermeneutics, the obsession with literary theory and figures of speech. But I had studied Wittgenstein at Amherst; I knew of Hellenistic philosophy and the different Platonic schools. I had lived in two or three societies other than my own; I had travelled extensively in half a dozen others and written books about them; I had learned foreign languages; yet here I was, a few hundred miles from where I grew up, overtaken by an experience of the uncanny as powerful as any I had ever known.’

This inadequacy is an invitation, and this astonishment a submission. Taseer remembers what Nehru had written about the ‘spiritual loneliness’ he felt as one who was caught between the East and the West. Even as Benares beckons with its knowledge and antiquity, he feels the strangeness of being what he is—or what he is not. India itself is not what it seems to the idle eye; it is like the Brahmin of Benares, twice-born but suspended in time. ‘Like so much of the old non-West, India was an ancient civilization reborn as a modern nation, twice-born in another sense. But it was amazing to consider how long it had been trying to cure itself of the trauma of the second birth.’

It is this India that unravels before the seeker’s eye as Taseer returns to Benares a few years later—and he has learnt Sanskrit in between. The Benares he steps into is still what Mark Twain had written of it: ‘older than history, older than tradition, older even than legend, and looks twice as old as all of them put together.’ The traveller, though, carries within him raw and recent sorrows. His father, a governor in Pakistan, was killed by his bodyguard for his stand against the Islamic Republic’s blasphemy laws. It showed him that ‘the isolation of people such as myself on the Indian subcontinent was not merely undesirable; it was dangerous’. Benares brings to its ghats all sorts of seekers, both dead and living. It is where the isolated and the abandoned, the blessed and the cursed, coalesce. The depth of its decay and the resonance of eternity add to their search.

Taseer joins them with undying curiosity, and The Twice-Born: Life and Death on the Ganges (Fourth Estate, 256 pages, Rs 599) is a book of portraits, in which the testaments of Brahmins tell of an unresolved dispute between tradition and modernity. Every encounter here is a story of wonderment and disillusionment, of pursuit and remoteness, of contentment and suppression, and mixed rewards are inevitable, for Benares, as he discovers, is the enigma of the elevated mind. The epiphany at the Abhinavagupta Library has prepared him to be a listener who now understands the meaning of sphota and more. His notebook alternates between admiration and scepticism as he, as an honorary twice-born, finds himself among the Brahmins of Benares.

And they make this book the most rewarding one written by a contemporary writer on the perpetually romanced— and sacred—geography of India. Kamlesh Dutt Tripathi, a scholar, relives that day when, he, a boy of nine or ten, accompanied his father to meet Pandit Madan Mohan Malaviya, the founder of Banaras Hindu University. The boy recited Malaviya’s favourite Sanskrit verse for him. He tells Taseer: “It is a verse about Krishna in the form of a cowherd, and a very difficult verse to recite, but I recited it very well. It made Malaviya-ji very happy, and he gave me his blessings.” The boy would one day head the Sanskrit Department of BHU. Tripathi still carries within him old family sorrows, of premature deaths and colonial cruelties. The price the family paid. ‘This family of Brahmins had tested the waters of a brave new world and found they were out of their depth: the new knowledge was part of a killing enterprise.’ Maybe the purest of Brahmins don’t comprehend the paradoxes of modernity. The mind of Tripathi is sustained by a superior sense of being in the world. “To be contemporary,” he tells Taseer, “ is to understand all of one’s past, all of one’s inheritance, and, while joining this to the present, to look toward the future. This is what it is to be contemporary. It has no political meaning for me.”

The discontents of modernity run through the book, and their receptacles include tour guides and philosophy professors. Anand is a student at BHU, but he is what a Tripathi was not in another time, a learner and interpreter of life. In the mythology he created for himself, the God of Benares has brought him this far, and he doesn’t know what lies next. Sanskrit won’t change his life, as it did for Tripathi. For PK Mukhopadhyaya, ‘representing the Brahmanic tradition of Bengal on the one hand, and totally versed in modern European philosophy on the other’, the evening of his life on the Ganges is a meditation as well as a realisation. As Taseer writes, ‘If Mukhopadhyay found himself at odds with the world around him, it was because he was trying to reorder the confusions of modern India through a strict adherence to dharma.’ The power of the Brahmin doesn’t come from the hierarchy of caste alone; it comes from the virtue of renunciation. The ideal Brahmin is the original Hindu, whose pursuit, Mukhopadhyay believes, is always dharmic. Set against the scholar is the guide with fire within. In Shivam’s world, “either we throw ourselves into this modernity or we go back to what we were. What is intolerable is this limbo, this middle condition, for in the end, the truth is only that.” That is the river, where death is the eternal fire. Where death is a tableau on the water. Where death is luminous—or a floating grotesquery. The Brahmins on the river, trapped between the creativity of tradition and the confusions of modernity, are the last readers of what they consider to be the higher truth. They belong to ‘the aristocracy of the mind’.

By telling their story, Taseer becomes the storyteller of an India struggling through its own existential confusions. He listens to the voices filtering through the ages, as ceaseless as the rhythm of the Ganges. When the stories become overwhelming, he steps aside, unsettled by their tragedies, their timeless certainties, and their recurring pathos. The more he listens, the more he becomes aware of an India where tradition no longer complements the modern. It is the tension between cultural memory and current political anxieties about change—Narendra Modi lurks beneath the narrative—that gives this riverside saga the kind of literary urgency we hardly see in writings on India. Taseer’s journey is guided by a sensibility refined by his own acquired Sanskritic self; along the way, semaphoring him are writers such as Mann, Koestler, Twain, Coomaraswamy, Naipaul and Tagore. And, most significantly, Alice Boner, the Swiss artist and scholar who lived by the river from 1935 to 1978. In her diaries, Taseer reads his own strangeness in Benares. In The Twice-Born, which carries the most elegant sentences written about India by a writer of our time, the stranger is the knowing one, the ideal Brahmin. It’s all about the elegance of the mind.