Secular alarmists and cultural atavists have hijacked the discourse 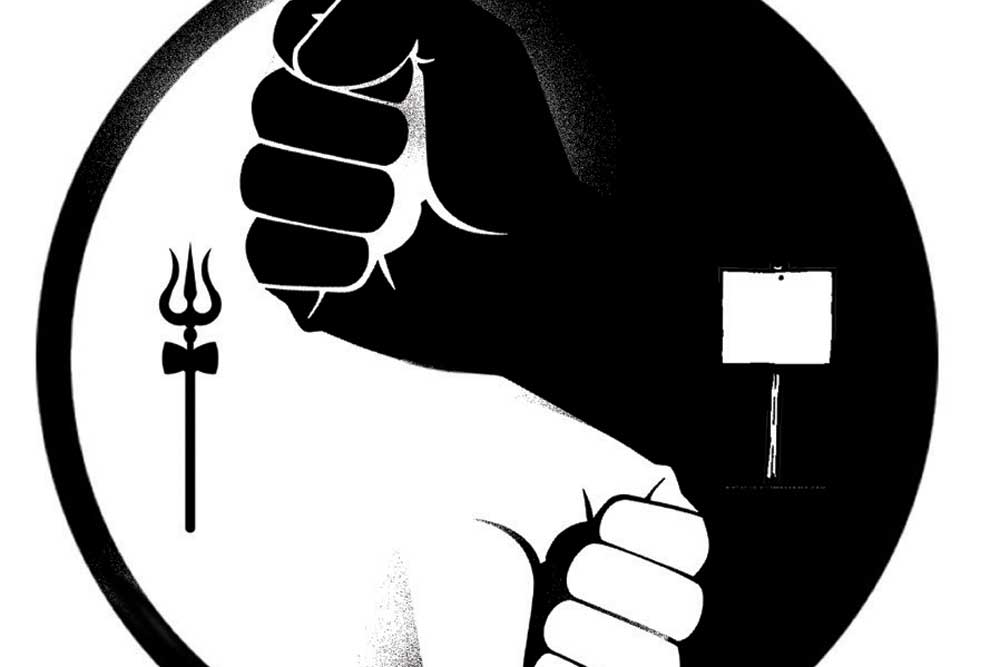 FIRST THE DECLARATIONS, because ‘Who Are We?’ is the question that concentrates the national mind nowadays. Or so it seems at a time when definitions and attitudes have become the talk of the nervous town.

So here they are.

I don’t have to eat beef to prove my secular credentials, and neither do I need to endorse cow slaughter to show my tolerance. Then I feel like a stranger in a place where the slaughter of the beef-eater is an isolated incident of ‘civilisational rage’. Where cow vigilantism is a necessary cultural expression is not my kind of place either.

This town is not mine when I’m tutored on the secular responsibilities of an Indian, and when I’m force-fed on the Idea of India, as if condescension and self-righteousness are the twin principles on which our national identity is built. This town is a medieval outpost when self-chosen apostles of Bharatiyata set the limits of our cultural discourse, and when history is presented not in a scholarly framework but through cosy revisionism verging on mythology.

The place marketed as Wretched India, as conspicuous as the now-retired snake charmer in certain editorial pages and seminar rooms, is unfamiliar to me. It’s an exotic place inhabited by man-eating bigots and custodians of a Unipolar Hindu Rashtra, and it’s where temples of vengeful gods exist in perfect disharmony with the gulag for the dregs and deviants. Then the other place, too, is not mine, the Vedic Ruritania of the cultural nationalist steeped in ancient grievances, the original Indian threatened by the unassimilated enemy.

Suddenly I’m caught between these two extremes of India. Its stifling duality is what dominates conversation in the capital today. The consolation is that Delhi itself is a place so remote from what we call India. In this echo chamber, we listen to what soothes our torn conscience, what adds to our angst, and what make us the last spokesmen of truth. What unites these extremes is Narendra Modi. Self-righteous secularists need him as their convenient bogeyman: the axis of an Order of Hate. That noble minority, the last remaining lofty minds in the benighted Republic, always realises the uses of an Evil Throne, and in an India of savaged secularism there is none more useful than Modi in power. For them, he embodies the closing of the Indian mind. He may be a divisive leader legitimised by the unrefined majority in the world’s most illiberal democracy, but thank you, he’ll always be the one-who-should-not-be-there—that’s Modi for the most righteous liberal India.

For the other extreme, the newly empowered cultural nationalists, Modi is an invocation as well as an inspiration. His rise for them epitomises Bharat Re-armed. Modi may engage with the future by going poetic on the promises of Digital India and the possibilities of the young and the inventive, but the unlicensed armies of Hindu nationalism sprouting across the heartland see him as a legitimisation of their existence. They are the redeemers, volunteers and warriors of a resurgent nation where blood will be shed if necessary for the perpetuation of the sacred, and Modi is a validation of their struggle.

We are caught between secular alarmism and cultural atavism. The first comes from a sense of disenfranchisement. The parvenus of the Right have destroyed the old Establishment, and the fallen still can’t overcome their loss of entitlement. Dissent in this city, more often than not, originates from those who have not come to terms with the rise of an alternative set of ideas. Unfortunately, these ideas do not necessarily take India forward. Cultural atavism is a direct result of some of the new establishmentarians’ backward journey in search of Mahabharat.

It is the face-off between the alarmists and the atavists that has changed the vocabulary of the argument today. It has elevated the fringe to the mainstream. Every movement in its wake gives life to an unrestrained base, louder and aggressive. It takes upon itself the cultural responsibility of setting the agenda, a bit like the Tea Partiers of America. This is not what India should be talking about, or what India should be defined by, at home and abroad, no matter how predictably clichéd the forums are. It is not about losing a perception war; it is about the anomaly of a discourse in which Modi is a misplaced motif. Modi won India as a moderniser nationalist. He did not visit the souvenir shops of mythology for his accessories then. He gains little by being a bystander as people in his party do what he did not in the run-up to 2014 or after.