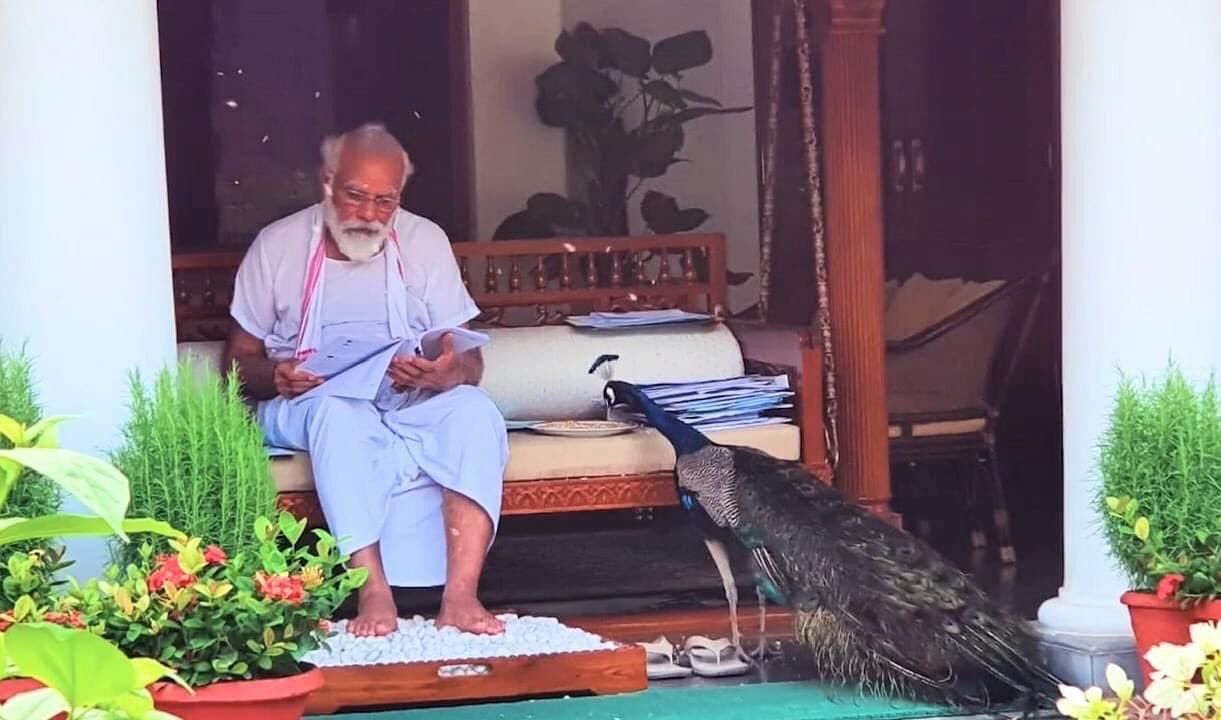 NARENDRA MODI TURNS 70 on September 17th. Born less than eight months after the birth of our Republic, Modi, more than any other leader or public figure, has come to represent the possibilities and promises of new India. Love him or hate him, you can’t ignore or wish him away. Modi is larger than life. He is the yuga purush, India’s millennium man. A billion hopes, dreams, expectations—and, yes, disappointments, too—ride on his name. As rich tributes pour in from across the globe, his worldwide fame cannot be denied or muted either.

Yet, monitoring the media days before he crosses this milestone, I look in vain for some big-ticket announcements or festivities. There is very little pre-publicity or buildup. All that I find is that on September 15th, a cohort of BJP general secretaries resolved to celebrate the occasion with cleanliness drives, food distribution and blood-donation camps at 70 locations across the country. Considering the multiple crises that our country faces, a somewhat lowkey if not subdued celebration was both expected and appropriate.

It is the BJP President, JP Nadda, who has been a bit more forthcoming: “Prime Minister Narendra Modi is turning 70 on September 17. If we look at his life and his journey, seva [service] has been the prime focus in his life. His life has been dedicated to the seva of people and the country. Hence, the BJP has decided to observe September 14-20 week as ‘Seva Saptah’.” Quite fitting, it would seem, for a Pradhan Mantri who calls himself ‘pradhan sevak’ (servant-in-chief) of the nation. However, leader of the opposition and Gandhi family dynast Rahul Gandhi was not so charitable: ‘Save your own life as PM is busy with peacocks.’

Speaking of the Prime Minister and peacocks, there was something symbolic in his feeding, with his own hands, India’s national birds. In the video footage that circulated widely, the birds are unafraid of Modi. Their trust shows, according to some animal lovers, that Modi is a good man. As one of them confided in me, “Birds and animals are supersensitive to our vibrations and auras. Those they trust are usually fine human beings.” “But,” I replied, “didn’t you see how grim the PM was? He rarely smiled as he fed the birds.” “Quite naturally. Given his position, he probably trusts only a small clutch of confidants and is closer to even fewer.”

The clips underscore Modi’s lack of human contact, if not loneliness. He was alone with his birds, more comfortable with his feathered friends than with fellow humans. The seclusion of a great leader is the inevitable outcome of the sensitivity of his office. A couple of years back, on Rashtriya Ekta Divas (National Unity Day), which is also Sardar Vallabhbhai Patel’s birthday, I saw Modi alone against the giant backdrop of the world’s tallest Statue of Unity. Again, the solitary splendour of the isolated leader was amply evident. Similarly, at the bhoomipuja ceremony of the Ram Mandir at Ayodhya on August 5th, apart from his speech, Modi sat mostly eyes closed, indrawn than outwardly oriented.

The peacock is also thought of as a proud and narcissistic bird, preening in its own beauty and attractiveness. Modi’s customary sartorial elegance and acumen, not to speak of his new style of wearing a longer, sage-like, pure, white beard, probably signals an acute consciousness of his looks and image, if not hint of vanity and self-absorption. Certainly, few Indian leaders have been so particular of their public persona or the theatre of presence as Modi.

Every act, every event, every speech, every statement of his is carefully calculated and calibrated for maximum impact and affect. His surprise air-dash to Ladakh on July 3rd is a good example. He not only boosted the morale of our soldiers after their deadly skirmish with their Chinese counterparts near Galwan, but also performed the Sindhu Darshan puja, a gesture revealing both his faith and our ancestral cultural ties and claims to region. After all, the word ‘Hindu’ is derived from ‘Sindhu’, which the Greeks and Europeans called Indus.

But personality cults are dangerous as we well know. Remember how Dev Kant Barooah, the Congress President during Emergency, infamously said, “India is Indira, Indira is India”? History soon proved him not only wrong, but insincere. Indira Gandhi lost the election in 1977. Barooah also deserted her, joining the breakaway Congress (U), lead by Karnataka strongman D Devraj Urs. Today, not just its splinter groups, but the Indian National Congress is itself in disarray.

A group of its prominent 23 leaders has written a letter to interim President Sonia Gandhi asking for major changes in the party’s functioning. But with very little by way of real inner-party democracy in the offing, there is no leader in India’s main opposition party that poses a serious threat to Modi. In fact, we are closer than ever to his prediction, if not promise, of a ‘Congress-mukt’ (Congress-free) Bharat.

Given that the third front, a non-BJP, non-Congress alliance, also is a pipedream if not delusion, Modi strides like a sole colossus across India’s variegated and uneven political landscape. It is Modi more than anyone else that has a sense of purpose and a belief in his own destiny as India’s transformer-in-chief. Whether he succeeds or not is less important at the moment than the faith and belief that the people of India repose in him. Given his growing international stature and reputation, we might justifiably say that Modi makes India proud like no other leader. Modi is not just made in and of India, but Modi and India are made for each other.

True, Modi, too, is subject to the vagaries of political fortunes and public predilections. Both fame and fortune are fickle, people’s preferences or popularity even more so. Yet, Modi has had an astonishing 19-year run at the top, as three-time Chief Minister of Gujarat, then as two-term Prime Minister of India. It is said that 13 was recently deceased former President Pranab Mukherjee’s lucky number.For those who track such things, Modi’s lucky number would be 14. He was not only the 14th CM of Gujarat but is currently India’s 14th PM too.

Modi’s second term has been marked by huge obstacles and difficulties. The challenges he faces, both within the country and abroad, are unprecedented and enormous. Apart from the Covid-19 pandemic, the economic crisis and the Chinese dragon breathing down our necks, our polity and society seem much more divided and fractious than before. That is partly because Modi has also powered through radical changes and reforms, such as the abrogation of Article 370, introduction of the Citizenship (Amendment) Act, resolution of the Ram Janmabhoomi-Babri Masjid imbroglio and tabling of the National Educational Policy 2020. It is a stressful and embattled time in our national life. But, then, the world over, nations and societies face an overwrought and uncertain future.

In all of this, Modi shines like a beacon of hope. Whenever and wherever he speaks, he conveys a positive and optimistic message. At the very least, he uplifts our spirits just a bit. Looking at him, we feel that our country is in good hands. He inspires a confidence in us, which makes him a remarkable leader—‘Modi hai to mumkin hai.’ It is not that we admire only him, but we also believe that we can do better both for ourselves and for our country. Till 2024, much remains to be done if his legacy is to be secure. But his unwavering determination, phenomenal political perspicuity, prodigious stamina and loads of good luck augur well for both Modi and India.