Alexander Zverev has now become the leader of the newest chasing pack, one that promises to do what many lost generations couldn’t—make tennis a young man’s sport again 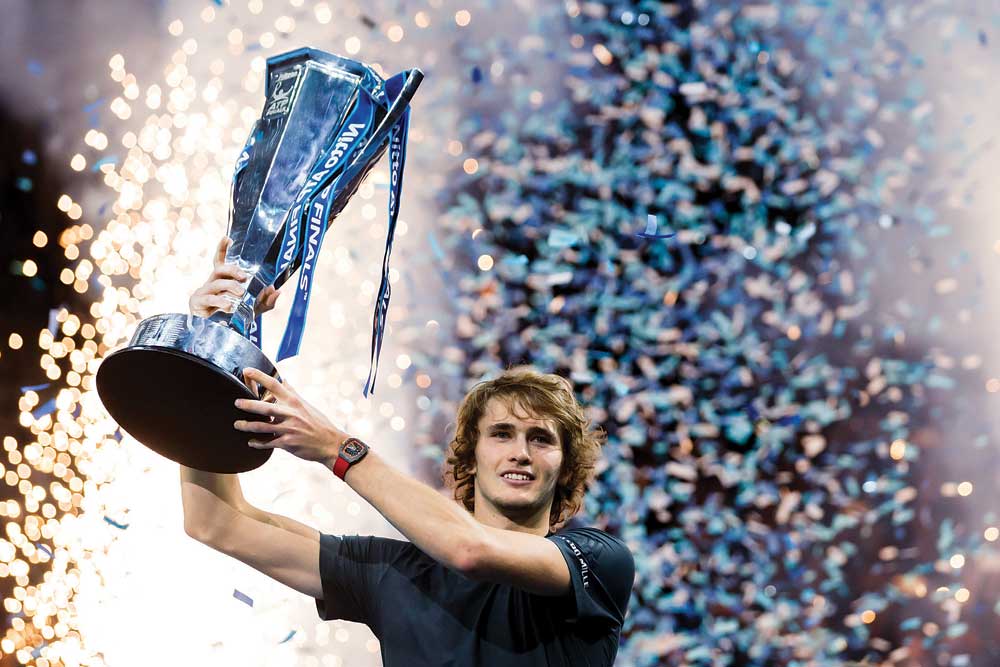 AND HOW WAS your weekend? Was it as memorable as Alexander Zverev’s, who beat Roger Federer and Novak Djokovic on Saturday and Sunday, respectively, to win a tournament that Rafael Nadal has never won?

Moments before a curtain of blue confetti fell on the tennis season of 2018 in London and he stood clutching the sport’s most significant non-Grand Slam trophy in one hand and a bottle of champagne in the other, Zverev had both his fists on the racquet and flicking the important stroke of his nascent career. Stretching every inch of his 6’6” frame to reach the edge of the ad court, Zverev’s hands whipped back an impossible down-the-line passing shot to win the final point of the year, and become the youngest champion of the ATP Finals since Djokovic from exactly 10 years ago.

A 21-year-old winning the season-ender is a feat radiant enough to keep tennis fans warm and hopeful through the off-season. But that glow was blinded by Zverev’s other, more luminescent achievement; that of defeating the greatest tennis player of all time and the greatest tennis player on current form, men who have won three out of the four Grand Slams this year and 34 Majors between them, both in straight sets to wrap up the best weekend of his life.

No player had beaten Federer and Djokovic in the semi- final and final of the same tournament in a long while; since 2012. Before that, this incredible feat was achieved only by Nadal, Andy Murray and David Nalbandian. Nalbandian, 36, has long retired from the sport. Nadal, 32, is currently nursing an abdominal strain. And Murray, the youngest of this lot at 31, was a non-entity in the season gone by following his hip surgery. Zverev, a whole decade younger than Murray, has now become the leader of the newest chasing pack, one that promises to do what many lost generations couldn’t—make tennis a young man’s sport again.

Logic dictates that the modern-day, power-baseline game should be dominated by the physically fit—those in their prime rather than at the bitter end of their careers. Yet, to find the last man who won a Major under the age of 25, we have to go back to 2012, when a 24-year-old Djokovic won his third Australian Open title. The last nine Grand Slams, in fact, dating back to 2016, have all been won by men over the age of 30; a third of those Slams going to a 35-plus in Federer. This, of course, has made for exquisite viewing—a golden era spread over the entire careers (teens to thirties) of a handful of men. But the brilliance of a few has often forced fans of the sport to worry about its future.

From time to time, possible heirs-apparent were named— Milos Raonic, Grigor Dimitrov, Marin Cilic, Kei Nishikori, Kevin Anderson and even the mercurial Nick Kyrgios. Tasked with the unprecedented pressure of following in the footsteps of the greatest generation, they buckled. Between all of them, they managed one Grand Slam (Cilic), one ATP Finals trophy (Dimitrov) and two Masters-1000 titles (Cilic and Dimitrov). Zverev, on the other hand, has already won three Masters- 1000s and now, an ATP Finals. Lest we forget, he is 21.

Zverev owes his rapid growth to being raised in a tennis family. His parents, Irina and Alexander Sr., played on the professional circuit, as does Zverev’s brother Mischa, ten years older and ranked in the top-100 currently. When Mischa was four, the family immigrated to Hamburg, Germany, where in 1997, Alexander Jr., or Sascha, was born. By the time Mischa was playing professionally, a pre-teen Sascha would tag along on tour, often being allowed to hit with his older brother on Grand Slam courts at the end of his practice sessions. At 16, Sascha Zverev had already made his pro-debut; at 17, he had qualified for Wimbledon, his first Slam; and by the time he was 18, Zverev had surpassed his older brother in the singles rankings.

At the Australian Open in 2016, a 19-year-old Zverev lost in straight sets to Andy Murray in the first round. But Murray was pleased enough in what he saw, to say: “He’s one of the best young players in the world, and he’s going to be around for a very long time.” Zverev liked what he saw in Murray’s game as well; enough to first hire the Scot’s fitness trainer Jez Green (who had transformed Murray from a skinny lad to a Nadal-shaped hulk) and later, poach the coach who helped Murray clinch each of his three Slams, Ivan Lendl. But let’s not get ahead of his story.

Zverev always had He-Man’s pageboy hairstyle, and an action-figure face. But it was only once Green came on board, in 2017, that he really began resembling a superhero; finally, his ropey limbs started gaining some real muscle. Bulking up helped Sascha blow away the competition in the Rome Masters and Rogers Cup last year, and in winning his third Masters-1000 event in Madrid this year. But in the Slams, all the physical strength in the world couldn’t help him get past the fatigue of best-of-five-sets matches. In eleven Slam appearances so far, Zverev has made the quarterfinal stage just once (at the French Open this year, where, too, he saved match points in three out of the first four rounds).

What Zverev needed was a coach who could set his head right; and Lendl, the former world number one, has a reputation for being a mental gymnasium. Lendl came on board just a week before the US Open in September—too soon to make a difference and Zverev was ousted yet again in the early stages. But just two months on, the young man’s psyche was Ironman Triathlon-ready for the season-ender in London. In the round-robin stage, Zverev was no match for Djokovic, losing 4-6, 1-6. But he trusted his instincts and those of Lendl’s—the strategist who turned around Murray’s fortunes after he had lost four Grand Slam finals in a row.

Before Zverev could have his rematch against Djokovic, there was the small matter of getting past Federer. The last time the two of them met, on this very court incidentally, Federer had prevailed in three sets. But before that, Zverev had twice defeated the great man (once in straight sets in the final of the Rogers Cup) and there’s no guessing what Lendl would’ve made his pupil focus on. In the semi- final, Federer wasn’t Zverev’s enemy; the crowd was. At a crucial juncture of the match, the second set tie-break, Zverev stopped play mid-rally after his peripheral vision caught sight of a ball-boy running after a stray ball. The point had to be replayed, which Zverev promptly won, and the spectators were enraged—booing and catcalling him after he booked his place in the final.

If he was nervous about playing in front of the same crowd just 24 hours later, Zverev did remarkably well not to wear the fear on his face. Against Djokovic in the final, he started, and ended, the match with the force of nature. Few tall men since Marat Safin have been as nimble as Zverev on a tennis court. Zverev possesses Safin’s easy movements; and his love for bling too. With his gold chains swishing this way and that, Zverev served bombs at Djokovic. In the first set he struck nearly 90 per cent of his first serves, and the speed of those missiles averaged 135mph. In comparison, Djokovic’s average first serve speed was 112mph, just 3mph faster than Zverev’s second serve average. A lot of the German’s service games were held on love.

Serve alone cannot defeat the likes of Djokovic. “Ivan (Lendl) analysed the match that I played with him a few days ago, told me a few things I had to do different. I was more aggressive today, sure. I tried to take the ball earlier. Those kind of things,” he would say later. Djokovic’s serve hadn’t been broken before the final. Not once. On Sunday, Zverev’s supreme shot-making—armed with great rhythm and power on both wings—sent Djokovic on a three-game serve- losing streak and four breaks over all. The first time he broke Djokovic’s serve, he won the first set. The next two gave him a runaway lead in the second. When Djokovic was broken for the fourth and final time on this watershed night, thanks to Zverev’s incredible two-fisted passing shot, the arena’s roof rained blue confetti; perhaps washing in a new era.