Sabarimala: In Defence of Tradition

Why the battle for an inclusive Ayyappa worship makes no sense 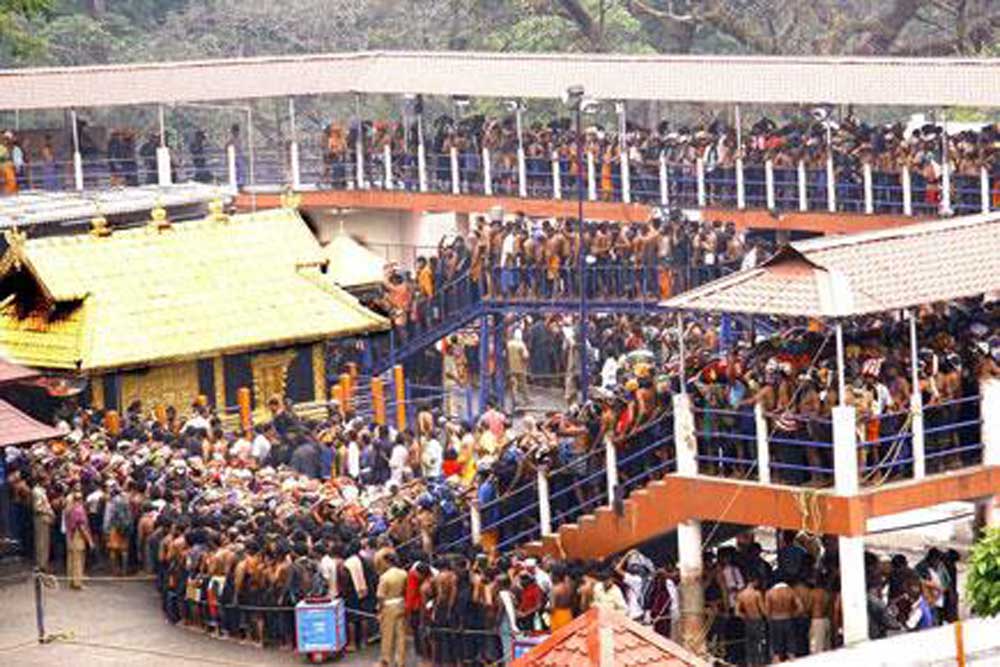 Sabarimala Temple is in the news about the tradition of not allowing entry to women of childbearing age. However, little is known about the origins of the temple and its traditions. So, let us see how it originated and evolved over the years.

Tradition has it that just hearing about Lord Rama had made Sabari one of his ardent devotees. As was a dream come true for most Bhaktas, Sabari was able to assuage Rama and Lakshmana’s hunger, as they went on their way in search of Sita who had been abducted by Ravana. Sabari bit into the fruits she served Lord Rama, from the ones she used to collect daily, in the hope of feeding Rama, were He to suddenly manifest. This was a gross violation of traditional Indian etiquette. It took the sagacity of Rama to explain to Lakshmana, that far from being unhygienic and spittle spattered, Sabari was ensuring that He would get only the sweetest of fruit. Sabarimala, the place where this lady used to live had become a divine place, its very name celebrates the power of woman.

Lord Ayyappa had an unusual genesis. He was born out of Shiva and Vishnu, in His female Mohini form. There are two notable instances in this mystic birth. Attributing qualities like masculinity and femininity to Supreme Powers is totally a human trait. To have a Deity that was the synthesis of both Shaivite and Vaishnavite powers brought together the warring factions.

A casual look at the Shaiva-Vaishnava conflict will remind us of the infighting within what is a generally syncretic religion. It is the same with the Shia-Sunni tug of war and the more sophisticated Catholic-Protestant struggle.

Traditionally, it was only the pre and post puberty females who were allowed into this Temple. One of the reasons was the sheer physical rigorousness of journey. Before hormone pills were discovered, it was impossible for a menstruating woman to take an unbroken “Mandala” vow for 41 days. The rank smell of menstrual blood would have been a liability then, in attracting the attention of wild animals in the now sadly depleting and once almost impenetrable jungle of this mountain shrine.

With thirty-three Crores of Divinities to choose from, a Hindu is spoilt for choice. Ayyappa, the God of Sabarimala, does not hate women. To suggest that this bachelor God will lose His Head if female devotees throng to see Him is ridiculous.

Malikapurathamma, a lady in love with Lord Ayyappa, has been yearning for Him since centuries. Ayyappa had promised to wed Her, the year there are no new devotees ( or Kanni Ayyappans as they are called ). As part of their visit to the temple, first time devotees are required to make their mark at the Sharam-Kuthi-Aal. Kerala folk songs abound with an eager Malikapurathamma setting out to the Sharam-Kuthi-Aal, hoping to find it bare and Her wedding to Ayyappa finally taking place, only to return dejected at the ever increasing deluge of first time Sabarimala goers.

In the traditions enshrined in Hinduism, women who fell in love with deities themselves became deified and worshipped. Parvathi, was the daughter of Himavan as well as a rebirth of Sati, Shiva’s first wife, became a Goddess Herself, as did Aandaal who married Her beloved Vadapathrasaayi, or reclining Vishnu. Isolating a male God from His possible human lovers was never a tenet of Hinduism.

However, when entry for women into Sabarimala is asked for just to prove a point for feminism, things become dicey. Most devotees of Sabarimala would not do anything to disturb the traditions of the temple. This is not because there is an inherent inferiority in women. Biologically and otherwise, men and women are differently enabled. For a smoothly functioning happy society, there has to be a balance between the two. A conflict debilitates both.

Attukal Pongala where only female devotees in their Lacs, cook food for the Mother Goddess has entered the Guinness book of records. Does the Attukal Bhagavathi look upon men as inferior to women? Unlikely.

To put pictures of the appellant who has asked for women’s entry into Sabarimala, with meat and drink beside her, on social media just shows the mindset of those who did so. The greatest of the Mother Goddesses is perfectly “cool” with both liquor and meat. Valmiki’s Ramayana, one of the oldest versions of the texts has numerous references to a meat eating Shri Rama. Vegetarianism was the direct result of the Buddhist influence on Hinduism.

The real issue here is not the entry of women into Sabarimala per se. The hidden threat is the attempted “homogenization” of a vibrantly diverse religion into a hide-bound and politically correct one, where differences are negated not for equality but for drab uniformity.

Die-hard Ayyappa devotees get up at dawn, bathe, go to the nearest temple in still-wet clothes in the pre-dawn chill of November/December, cook their own food, refrain from consuming meat and liquor, abstain from sexual relations for the full 41 days of Vrata. Each devotee of Ayyappa is himself or herself referred to as “Ayyappa” or “Swami”. They are seen to be the very manifestation of this God.

To try to embroil such a “democratic” and inclusive Ayyappa worship tradition in an anti-woman battle is as ridiculous as trying to prove the superiority of womanhood, with relation to masculinity, rather than celebrating its inherent diverse beauty.