The sacred and the civic on the Ganga 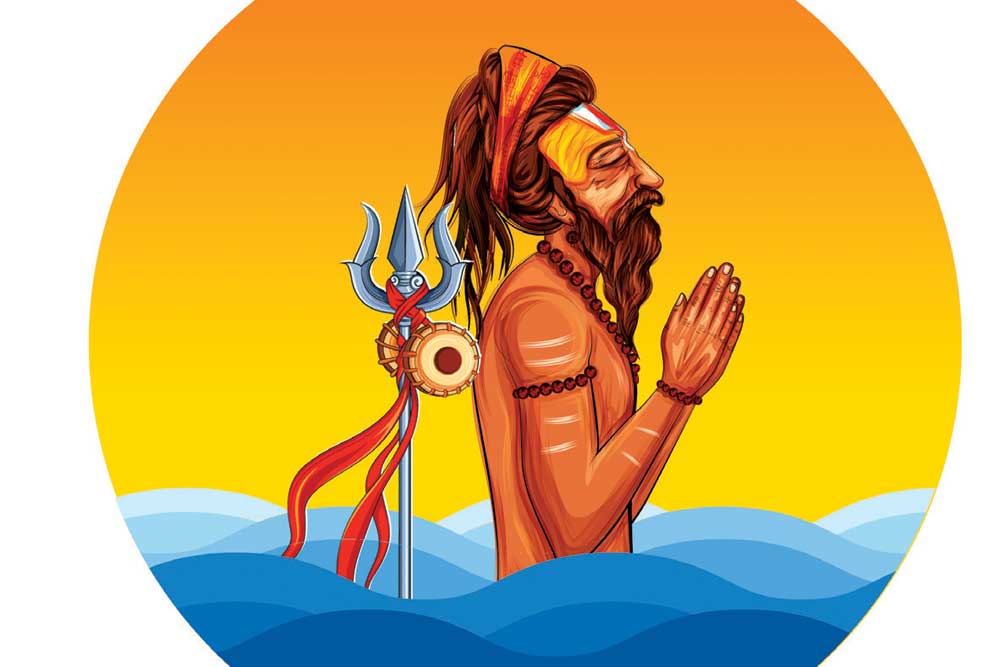 IN THIS COLUMN, I have spoken in the past about infrastructure. I will apparently deviate now, but not entirely. This time, it will be about Prayagraj and Kumbh, and I will link that with infrastructure in the next one.

‘Kumbha’ means a pot or pitcher. The gods (devas or suras) and the demons (asuras) are cousins. Their mothers are sisters. The sage (rishi) Kashyapa married several of Daksha’s daughters—Aditi, Diti, Danu, and so on. Aditi’s offspring are devas, also known as adityas, because they are descended from Aditi. Diti’s offspring are daityas, a class of demons. Danu’s offspring are danavas, another class of demons. For all practical purposes, the words daitya and danava are synonymous. The word asura, antithesis of sura, is another synonym for demon. Strictly speaking, demons are elder brothers, or cousins. Gods are younger. Cousins or not, the two categories fought continuously. The king of the gods has a title of Indra. In the present era of manvantara, Purandara holds the title of Indra. Every once in a while, the demons defeated the gods, sometimes facilitated by boons received from Brahma (the creator) or Shiva (the destroyer), and transgressions caused by Purandara Indra’s arrogance and haughtiness. A demon usurped the throne of Indra in heaven and driven to desperation, Indra and the gods sought succour with Vishnu (the preserver). These stories are told in the two epics of the Ramayana and Mahabharata, known as itihasa, and in ancient texts known as the Puranas. Even when they were not driven out of heaven, the gods had a problem. The preceptor of the demons, Shukracharya, possessed knowledge of bringing the dead back to life (mritasanjivani vidya). Thanks to this, when suras and asuras fought, dead asuras were revived, but dead suras remained dead. In search of a solution, the gods rushed to Vishnu. ‘You need to churn the ocean,’ said Vishnu. ‘You can’t do it alone. Have a temporary truce with the demons. Churn it collectively. The ocean will throw up its treasures, including the elixir or nectar of immortality, known as amrita’.

The demons readily agreed. They wanted the treasures too. They also desired amrita. Churning of the ocean (samudramanthana) was no mean task. Mount Mandara was the churning rod. Vasuki, king of the serpents, was the rope used for churning. Without a stable base, Mount Mandara started to wobble. Therefore, Vishnu assumed his tortoise incarnation and supported the base. As the churning continued, many treasures emerged—the goddess Lakshmi; Varuni, the personified goddess of liquor; apsaras or celestial maidens; Surabhi, the cow that satisfies all objects of desire; Ucchaishrava, the divine horse; Airavata, the divine elephant; the jewel Kaustubha; the celestial tree known as parijata; and so on. The demons claimed some of these treasures, the gods the others. The churning also generated a terrible poison, known as halahala or kalakuta. This was so virulently venomous that it threatened to destroy the worlds and everything in them. To save the worlds, Shiva consumed this poison. As a result, Shiva’s throat turned blue. Dhanvantari is the physician of the gods, and the god of physicians. Once the poison was out of the way, Dhanvantari emerged from the ocean, holding the pot of amrita in his hand.

The gods wanted amrita, so did the demons. They started to fight. Kashyapa not only married Aditi, Diti and Danu, he also married other daughters of Daksha. Two of these were Vinata and Kadru, sisters of Aditi, Diti and Danu. Vinata was the mother of all birds and one of her sons was Garuda, Vishnu’s mount. Kadru’s children were 1,000 serpents. Vasuki was one of these. To make sure that the demons didn’t get any amrita, Garuda ran away with the pot. Or in a side story, Kadru and Vinata had a bet. Since Vinata lost the bet through some deceit on Kadru’s part, she became Kadru’s servant. Garuda didn’t like the idea of his mother being a servant. Kadru agreed to release Vinata provided Garuda brought the pot of amrita to the serpents. That’s the reason Garuda flew away with amrita. To return to the main story, the demons had to be dissuaded from drinking amrita. Vishnu assumed the form of a beautiful woman, known as Mohini. So smitten were the demons by Mohini that they promptly forgot about amrita. While the demons were deceived, the gods sat down to have amrita. The demon Svarbhanu was rather clever. Disguising himself as a god, he sat down to have amrita too. By the time this was noticed, it was a bit too late, since Svarbhanu had already had a bit of amrita. Surya (the sun-god) and Chandra (the moon-god) pointed out to Vishnu what Svarbhanu had done. Vishnu’s razor-sharp weapon is known as Sudarshana chakra. Using this, he sliced off Svarbhanu’s head. But since Svarbhanu had savoured amrita, he couldn’t be killed. The head became Rahu and the headless torso became Ketu. Rahu wasn’t going to forgive Surya and Chandra, the culprits who had informed Vishnu about them. Therefore, at the time of solar and lunar eclipses, he respectively swallows up the sun and the moon. A pot full of amrita, carried away by Garuda. A pot full of amrita, carried away by Vishnu in his form of Mohini, before he handed the pot over to Jayanta, Indra’s son. In this process of carrying, itihasa or Purana doesn’t quite tell us drops of amrita were spilt anywhere. Those are later stories and they tell us four drops fell in Prayaga, Haridvara, Nashik and Ujjain.

Prayag is an old and famous human settlement, steeped in history and tradition. The Sanskrit word ‘yaaga’ means oblation or sacrifice. The prefix ‘pra’ can qualify the word ‘sacrifice’ in many ways. There are references to Prayaga in the Valmiki Ramayana, Mahabharata and several Puranas. In the Valmiki Ramayana, in ‘Ayodhya Kanda’, on their way to the forest, Rama, Sita and Lakshmana arrive in the sage Bharadvaja’s hermitage. Having entered an extremely large forest, they went to the region where the Bhagirathi Ganga flowed towards the Yamuna. Rama tells Lakshmana, ‘We have certainly reached the confluence of the Ganga and the Yamuna.’ The confluence of the Ganga and Yamuna, where Bharadvaja’s hermitage was, is the place known as Prayaga. Today, people do visit Bharadvaja’s hermitage in Prayagraj. But rivers change course and the Ganga has moved away from the ashrama.

In the ‘Vana Parva’ section of the Mahabharata, there is a sub-parva known as ‘tirtha-yatra parva’. A tirtha is a sacred place of pilgrimage one visits to acquire merit. Thus, this sub-parva is about visiting such sacred places of pilgrimage. However, a tirtha isn’t just any place of pilgrimage. There is a sense of descending down towards the water. Therefore, to be classified as a tirtha, a spot must have water, as Prayaga does. In ‘Vana Parva’ we are told that the tirtha Prayaga (along with a few others) was a place where Brahma, the creator, undertook a sacrifice. It was his sacrificial altar. Therefore, it is the best of tirthas and the Vedas and sacrifices exist there in personified form. If one bathes in Prayaga, one acquires the merits of undertaking rajasuya and ashvamedha sacrifices. We are not concerned with dating when texts like the Valmiki Ramayana and Mahabharata were composed. For our purposes, by the time these two epics were composed, Prayaga was a celebrated tirtha, where one went to bathe. The Puranas mentioned reinforce that impression. In Padma Purana, ‘Many are the tirthas that have been spoken about. Some yield objects of desire, others yield emancipation. Those that yield objects of desire don’t necessarily yield emancipation. Those that yield emancipation don’t necessarily yield objects of desire. However, there is a tirtha, the king of tirthas, which is capable of yielding both simultaneously. This happens to be Prayaga.’

Brahma, Vishnu and Shiva are the trinity of creator, preserver and destroyer, and all three reside in Prayaga. Brahma resides there in invisible form; Vishnu, in his form of Venimadhava; and Shiva, in the form of an akshaya vata, a banyan tree that does not get destroyed. Since Shiva resides in Prayaga, Prayaga is not destroyed at the time of universal destruction. If the gods reside there, their consorts must also be there. Shiva’s consort is Ganga and Vishnu’s consort is Yamuna. Brahma’s consort is Sarasvati. Just as Brahma resides in Prayaga in invisible form, so does Sarasvati. Unlike the clear Ganga and the darker Yamuna, the Sarasvati cannot be seen in Prayaga. But she is there and Prayaga is triveni sangama (confluence of three rivers). The next time you hear ‘Prayag’, break it up into the constituent aksharas (syllables). ‘Pra’ stands for Ganga, ‘yaa’ for Yamuna and ‘ga’ for Sarasvati. Prayaga is a tirtha where one goes to have a bath. It is a place of pilgrimage and that bath is even more sacred on auspicious days. Examples of such auspicious days are the day of the new moon (amavasya), the day of the full moon, or days when the sun enters a specific sign of the zodiac, or specific months. What happens to infrastructure in a city when there is a sudden influx of pilgrims? I will save that for the next column.