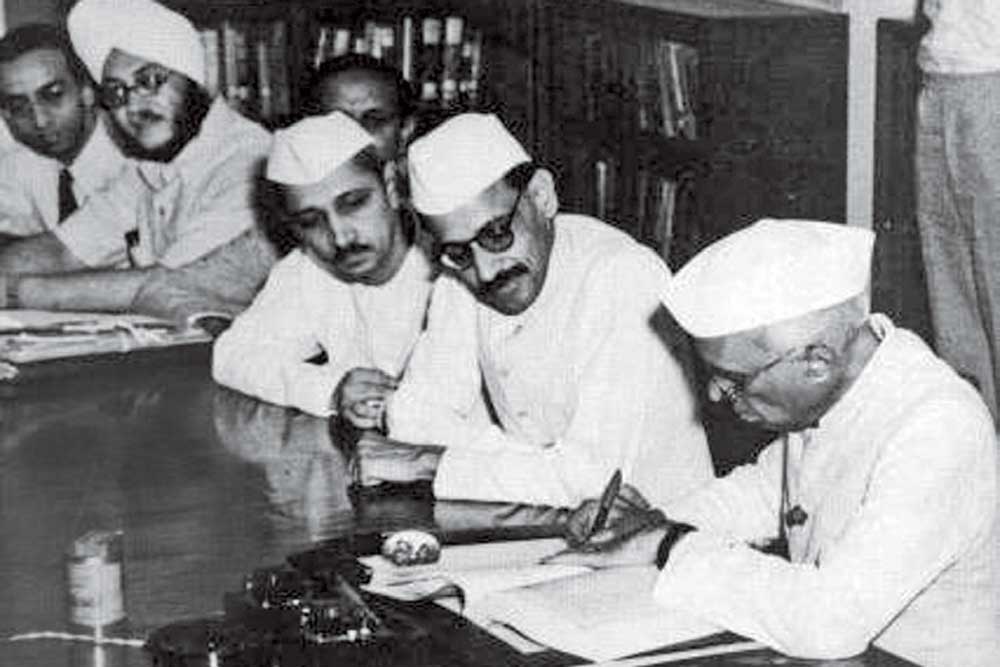 
THE FIVE-YEAR PLANS had Plan documents, starting with the First Five Year Plan for 1951-56. One should explain what one means by ‘Plan document’. Before this document could be prepared, the fledgling Planning Commission had to prepare (in July 1950) a six-year programme for the Commonwealth Consultative Committee. This later became part of the Colombo Plan and was for the period 1950-1956. When the Planning Commission was formed, there was no commitment that plans would be for five years, though five years is a natural timeframe and countries like the former Soviet Union did have a tradition of five year plans. Given the Colombo Plan angle, it was perhaps inevitable that the First Five-Year Plan should be for 1951- 1956, since the Government picked up many elements that were part of what was given to the Commonwealth Consultative Committee. In July 1951, the ‘Draft Outline’ of the First Five-Year Plan was ready. There needed to be some forum where this Draft Outline could be discussed, with states as parties to the discussions. The Draft Outline highlighted the need for a forum. Accordingly, the National Development Council (NDC) was formed in August 1952 and the first meeting was held in November 1952. After this, the First Five-Year Plan document was finalised in December 1952. As some critics pointed out at the time, it wasn’t much of a ‘plan’. However, ‘the framers of the Draft Outline were confronted with a certain constellation of economic, social, political, and administrative circumstances which severely limited their room for maneuver. They were not free to produce a ‘socialist’ plan, and had to devote their energies to devising the essential minimum of measures necessary to get some movement into a badly stagnant economy. Deficiencies of data restricted their capacity to make reliable forecasts; lack of any previous experience inhibited them from attempting to specify the techniques best adapted to deal with contingencies which, at beast, they could only vaguely envisage.’ This quote is from a now- forgotten book published by AH Hanson in 1966.

In April 1951, the first report of the National Income Committee highlighted problems with the statistical system. The Central Statistical Organization (CSO) and National Sample Survey Organization (NSSO) were in formative years. The Collection of Statistics Act would be passed in 1953. To go back to Harrod-Domar, the capital/output ratio was projected to be 3, obviously too low. The Plan document said, ‘A unit increase in national output and income will require about three times as much by way of additions to capital stock, and the increased output will materialize in the third years from the date of investment…. The rate of saving as a proportion of total income will have to go up from 5 per cent in the base year 1950-51 and 6 3/4 per cent in 1955-56 to about 11 per cent by 1960-61, and 20 per cent by 1967-68.’ This doesn’t allow a straightforward application of Harrod-Domar. But one can derive the average annual growth rate from the absolute gross domestic product (GDP) numbers that were given and it turns out to be 2.1 per cent. With an annual rate of population growth of 1.25 per cent, this gives a per capita annual rate of GDP growth of under 1 per cent. Naturally, the investment rate would be 6.3 per cent. Five-Year Plans are often assumed to start with target rates of GDP growth. This is a much later phenomenon and really started with the Fifth Five-Year Plan for 1974-79. At the time of formulating the First Five-Year Plan, apart from anything else, proper estimates of national income accounts didn’t exist. The First Five-Year Plan actually achieved a 3.6 per cent rate of growth.

When the First Five-Year Plan was over, there was a spring of hope. There were no signs of despair in the economy. A growth rate of 3.6 per cent was better than what had been hoped for. Some concerns were indeed expressed, such as while framing the Second Five-Year Plan document. The investment rate was 7 per cent in 1951-52, but had declined and the average for the entire Five-Year Plan was around 6 per cent. This wasn’t high enough. The capital/output ratio of 1.8 was too good to be true in the longer run and so on. Nevertheless, there was an overall sense of satisfaction, though the economic performance had little to do with either the Planning Commission or the Five- Year Plan Among otherthings, there were good monsoons throughout. However, building blocks were being put in place. In 1955, after passing the State Bank of India Act, the Reserve Bank of India assumed a controlling equity in Imperial Bank of India and it became State Bank of India. Industrial Finance Corporation of India had been set up in 1948 and in 1955, Industrial Credit and Investment Corporation of India (ICICI) was established. Life insurance was nationalised in 1956. There was the University Grants Commission (UGC) in 1956, the first Indian Institutes of Technology and Indian Institutes of Management would follow later, in 1961. There were public-sector steel plants in Bhilai and Durgapur, not to forget power and irrigation. Damodar Valley had already started and now there was Bhakra Nangal in Punjab, Hirakud in Odisha and Nagarjuna Sagar in Andhra Pradesh. There is an impression that Jawaharlal Nehru coined the expression ‘temples of new India’ at the inauguration of the Bhakra Nangal canal. (Some people even think he said it about all public sector enterprises.) The speech was actually in Hindi and was delivered on July 8th, 1954. The official English translation calls the speech ‘Temples of the New Age’. Jawaharlal Nehru said, “As I walked around the site I thought that these days the biggest temple and mosque and gurdwara is the place where man works for the good of mankind. Which place can be greater than this, this Bhakra-Nangal, where thousands and lakhs of men have worked, have shed their blood and sweat and laid down their lives as well?… Then again it struck me that Bhakra-Nangal was like a big university where we can work and while working learn, so that we may do bigger things.’

Towards the end of 1955, Milton Friedman visited India and was an adviser to the then Finance Minister CD Deshmukh. He wrote a Memorandum to the Government of India. Parts of this should be quoted. ‘There is a tendency not only in India but in most of the literature on economic development to regard the ratio of investment to national income as almost the only key to the rate of development, to take it for granted that there is a rigid and mechanical ratio between the amount of investment and additions to output…. There are two reasons why the amount of investment and the increase in output can be, and empirically are, only loosely connected. First, the form and distribution of investment are at least as important as its sheer magnitude. Second, what is called capital investment is only part of the total expenditure on increasing the productivity of an economy…. The form of investment is no less important than its kind. The chief problem in the Indian program that impresses on the tendency to concentrate investment in heavy industry at one extreme and handicrafts at the other, at the expense of small and moderate size industry. This policy threatens an inefficient use of capital at the one extreme by combining it with too little labour and an inefficient use of labour at the other extreme by combining it with too little capital…. The areas for which only Government can take responsibility are here so large, so vital, and require such large investments that they alone would be a heavy burden on the limited administrative personnel of high calibre. It seems the better part of wisdom therefore to avoid any activities that can be left to others.’ There is much more that was prescient. In 1955, the context was preparations for the Second Five-Year Plan (1956- 61). These preparations started in 1954 and the Plan document was finalised by March 1956.

At that time, the Deputy Chairman of the Planning Commission was VT Krishnamachari. PC Mahalanobis became a Member in January 1955 and remained a Member till September 1967. In most discussions of the Second Five-Year Plan, the Plan is equated with the Feldman-Mahalanobis model. The Soviet economist, Grigory Feldman, developed such a model in 1928, though it was translated into English much later. The first Mahalanobis version was a two-sector model, published in 1953. Shorn of the algebra, in a closed economy, there are two sectors: consumer goods and capital goods. Investments can be in consumer goods or capital goods. High investment shares in consumer goods lead to high output initially, but low output eventually. Therefore, in the longer run, it is better to channel investments into capital goods, which can be equated with heavy industry. The model stimulated a great deal of interest among economists and, over a period of time, criticisms and alternative models surfaced with regular periodicity. It is possible to be contrarian and argue that the model wasn’t quite the defining attribute of the Second Five-Year Plan. We will come to that defining attribute in the next column.