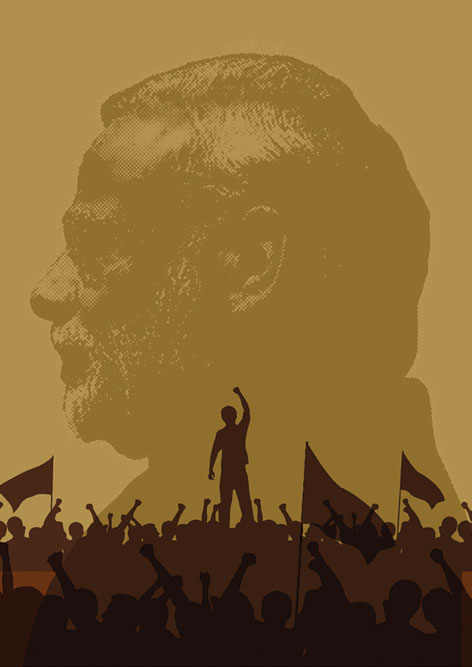 Political language—and with variations this is true of all political parties, from Conservatives to Anarchists—is designed to make lies sound truthful and murder respectable and to give an appearance of solidity to pure wind. One cannot change this all in a moment, but one can at least change one’s own habits, and from time to time one can even, if one jeers loudly enough, send some worn-out and useless phrase—some jackboot, Achilles’ heel, hotbed, melting pot, acid test, veritable inferno or other lump of verbal refuse—into the dustbin where it belongs.
—George Orwell
Politics and the English Language, 1946

ORWELL, IN AN essay that retains its cultural immediacy more than seventy years after its publication, was arguing for a verbal initiative in the time of political chaos. Language, even when it’s spoken, even when it’s not English, and even when the user is not necessarily a sensitive writer, can manipulate the real, play with perception, and create an alternative that exists only in some faraway Fearland. In Indian politics now, it is not chaos but churn. It has created an atmosphere of triumphalism—my kingdom has come—and a foreboding—my home is not mine any longer. The triumphalist speaks in a language that divides and degrades, stripping those who don’t fit in of dignity. The threatened nonconformist retreats further into victimhood.

They add new tensions to the already exhausted state of democracy, which is, if we go by the alarmism that marks the titles of political tomes, threatened by its bad practitioners, loosely categorised as populists and autocrats. In its safest homelands, it seems democracy favours those who highlight the betrayals of a holy tradition. From Donald Trump to Boris Johnson, it’s a story of defiance and redemption. Defiance: The man from elsewhere, or the man brutalised by his own party, conversing directly with the anxieties and aspirations of ordinary folks, a method that continues to be condemned by the elite as populist exploitation. Redemption: Political traditions in decay need usurpers as restorers, those who infuse ideas of sudden freedom in dormant ideologies.

The Indian story too falls into the pattern. In 2014, it took a man from elsewhere to reclaim India from what he portrayed as the entrenched guardians of lost traditions. It was not just the oldest political tradition alone that he was fighting against, though he kept the best of his soundbites for a Congress-free India and the “Sultanate” of Delhi. That provided the dramatics—and the headlines. In less spectacular and more subliminal ways, his fight was against the political tradition that shaped him and eventually let him down, too. The Indian Right, his campaign implied, was lost in cosy assumptions of nationhood. What it needed was a strong-willed nationalist and not a please-all sermoniser, and it’s me—that was the message. He won, and won bigger five years later, and what drives him today is not just the consolidation of power but the continuation of the fight. India is still his battlefield.

In this battle, intensified after the summer of 2019, the winner thinks that the legitimacy of his mandate is being challenged by the street fighters of liberal India. Even in victory, he has been provoked to play the victim. The street fighters, and their vocal sympathisers, think they are the legitimate victims in this illiberal democracy where Indians are indexed according to their religion. The winner says change is what he promised and change is what unsettles his antagonists. He is rebuilding the nation, and with raw materials not borrowed from the official nation-builder. He thinks he is redeeming the nation from the legacy of the so-called nation-builder. One plays by the book that defines him; the other plays against the book that defines.

The winner is relentless in transforming India, and at times, it seems India itself finds it difficult to keep pace with him. It’s high-velocity politics India has never witnessed before. It’s fiercely focused, and its cultural clarity has energised the Religious Right. The rejoinder comes from those who have been frightened by this clarity, and by this relentlessness. Why is it that one community alone is made aware what it takes to be an Indian? The marked Muslims are no longer afraid of being angry. The anger is shared and promoted by “ secular” parties. If the winner is losing the perception war it’s largely because of the manner in which some of his followers market the mission. Their words make, to reverse the Orwellian dictum, the truthful sound like lies. The winner of India still maintains his dignity. The verbal crudity of the cheerleaders diminishes him.

What sustains democracies is the perseverance of questions, and they are multiplying in India today. If the winner doesn’t pretend that he has all the answers, and if those who deny him political legitimacy can be modest about their relevance, we shall be fine.