Can the China-Pakistan Partnership be Countered? 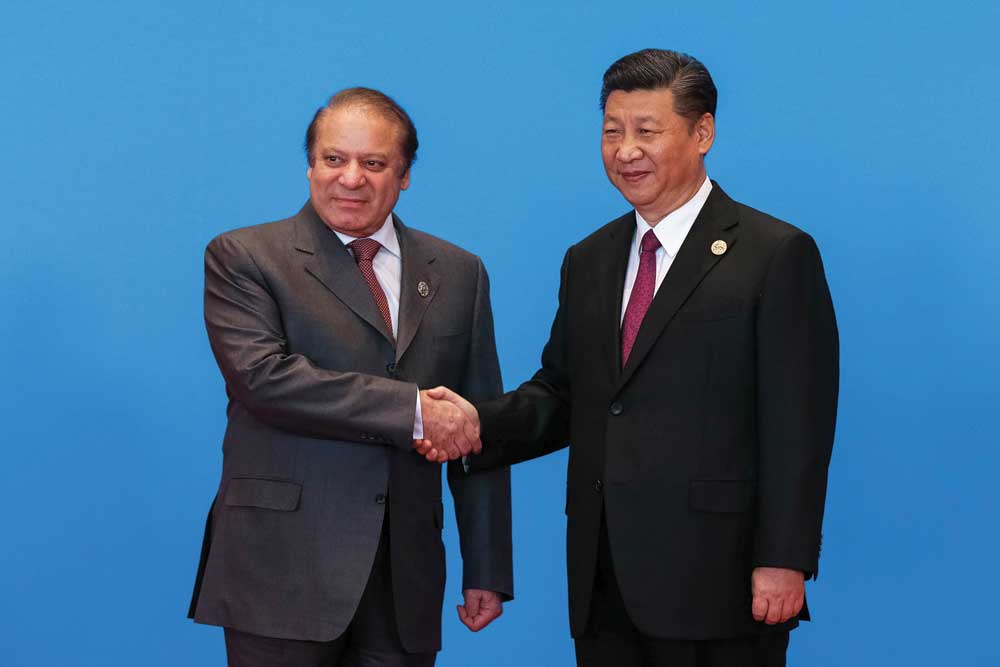 IN MID-MAY this year, Beijing unveiled its plans for a $1.3-trillion Belt and Road Initiative, previously referred to as the New Silk Route and then the One Belt One Road (OBOR) initiative. Its flagship project will be the China Pakistan Economic Corridor (CPEC), a $46 billion investment, that will connect Kashgar in Xinxiang to Gwadar in Pakistan on the Arabian Sea, and also prop up the failing Pakistani economy. But that apart, for India, it is the formalisation of the Chinese presence in northern parts of the territory of Jammu & Kashmir, as the CPEC will pass through Pakistan occupied Kashmir, that is most annoying. As an objection, Indian representatives were not in attendance at Beijing’s recent big coming-out party for OBOR, which was attended by over 28 heads of state and 60 top officials from all those countries that are part of this network of road, rail and sea routes connecting the Eurasian and African land mass to China in which Beijing has decided to pour in about $150 million annually over the next decade. For China, it is both a geo-economic initiative for Chinese products to be pushed into European and African markets as also a geo-strategic initiative, like the CPEC, which could eventually make Pakistan a Chinese vassal. The deep strategic ties between Beijing and Islamabad have for decades been a matter of concern to New Delhi. Until now, China’s focus had been to position Pakistan as a counterweight to a rising India, an India that could challenge its hegemonic agenda, concerns about which have been expressed by some Southeast Asian countries as well as Russia.

With Pakistan now squarely in China’s camp, a well-respected Pakistani newspaper, The Dawn, had questioned the CPEC arrangements, as it ‘envisages a deep and broad-based penetration of most sectors of Pakistan’s economy as well as its society by Chinese enterprises and culture… Its scope has no precedent in Pakistan’s history in terms of how far it opens up the domestic economy to participation by foreign enterprises.’ Such an observation hasn’t been publicly raised earlier in Pakistan, because China’s territorial encroachments have been slow and steady from the time Pakistan ceded the Shaksgam valley (north of the Siachen glacier) to the Chinese in 1963. Even India’s objections to China’s presence in J&K have been few, despite the fact that the Chinese occupy a large chunk of territory east Ladakh, in Aksai Chin. Apparently, there is a view in New Delhi that India is willing to accept China’s presence there as long as the Chinese are willing to let India’s habituated areas, especially in Arunachal Pradesh, be with India. But unlike India, the strong Chinese opposition to the Dalai Lama’s visit to Tawang was a reality check for those hoping that China would let things pass.

More annoying for Delhi have been two other Chinese diplomatic affronts over the past year, despite booming trade ties between the two countries with two-thirds of the Sino-India annual trade of $70 billion being in China’s favour. For one, Beijing openly blocked India’s move to add Masood Azhar, leader of the Pakistan-based Jaish-e-Mohammad terror group and a perpetrator of attacks on India, to the United Nations’ proscribed terrorist list, and the other was Beijing’s veto of India’s desire to join the Nuclear Suppliers Group (NSG) by insisting that Pakistan too must get it, even though most members of the Group see Pakistan as a threat to their anti-proliferation efforts. It’s clear to them that Pakistan’s entry to the NSG would legitimise its nuclear programme that observers say is ‘China’s nuclear programme in Pakistan’. Moreover, over the past decade, China has become Pakistan’s most trusted arms supplier. Formidable weapons such as the Chinese-Pakistani FC-1 planes, ZDK-03 AWACS planes, Zulfiqar class frigates and two-layered land-based surface-to-air missile systems HQ-7 and HQ-16 could potentially be used by Pakistan against India.

China has also been steadily restricting India’s strategic options by presenting India with a two-front war scenario along its land borders. That is, the possibility of a combined China-Pakistan front if India were to militarily retaliate against another major Pakistan-sponsored terror attack, even though China had failed to live up to Pakistan’s expectations during the 1965 and 1971 Indo-Pak wars, as Pakistan’s plans went horribly wrong. Still, India must be prepared for a two-front air-and-land campaign. Our forces are inadequately equipped for this, going by the then air vice chief and current IAF chief, Air Marshal Dhanoa’s remarks that “our numbers are not adequate to fully execute an air campaign in a two-front scenario”. The reasons lie between India’s tediously long defence procurement process, the impossible desire to suddenly ‘make in India’, and an earlier bizarre view that if the Sino-Indian border areas are developed then Chinese troops could quickly roll into the Assam plains (a line of thought that has fortunately been abandoned now), notwithstanding assurances by the Indian Army that it could stall any Chinese adventure and even take some territory, unlike the 1962 mess. But it is China’s growing reach in the Indian Ocean region, by establishing naval bases around India (as part its ‘string of pearls’ strategy) that has caused alarm in recent years. And OBOR would only help China consolidate its agenda of ensuring that the Indian Ocean isn’t India’s anymore. This Beijing plans to do by building ports that double up as military bases (like Djibouti and Gwadar) for its ships and submarines, both for force projection and to guard its vulnerable maritime supply routes from the Gulf region via the Straits of Malacca to eastern China. Currently, though, the Indian Navy can still make matters difficult for China in the event of a confrontation. But that edge may not last too long, with the Chinese working with alarming efficiency to a plan.

The immediate answer is for India’s establishment to accept that as China’s economy goes from strength to strength, so will its belligerence. Beijing has never been apologetic about its muscle flexing or land grab tactics, as seen in the South China Sea. Rather, it is very good at using history selectively to buttress its territorial claims. India must therefore be under no illusion. China is and will remain India’s most serious long-term challenge, and it will continue to prop up Pakistan to keep Delhi distracted. And China has no intention to settle its borders with India, other than perhaps by the use of military force when it catches India unawares. The solution therefore lies in India not only arming its forces—by speeding up purchases for the IAF and the Strike Corps planned for Sikkim—to prevent another Himalayan blunder, but also enhancing bilateral defence ties with countries like Vietnam and Japan. They have both been unhesitant to look China in the eye, unlike our pussyfooting diplomats who claim that by keeping the Himalayan front free of military engagements, they’ve achieved the impossible.

Passivity is a trait the Chinese do not respect. Moreover, with the US under President Trump increasingly keen to look inward, India has to make the most of its few trusted partners in Asia.

So, was there merit in India’s decision to pull out of OBOR? Yes, indeed. Apart from the fact that India wanted to convey its objection to Beijing’s territorial encroachment in north J&K (which is legally a part of India), all is not well with OBOR and how the Chinese are going about their business. Beijing’s projects in Central Asia (that Russia regards as its backyard), Sri Lanka and Malaysia have run into opposition, and though much of it is funded by Chinese banks, the high interest rates on projects have become difficult for countries to pay. Moreover, once inside, Chinese companies care little for the sensitivities of locals. As a counter, India has decided to hitch itself with Japan, which too is flush with funds and unwilling to join the OBOR network, with both countries looking set to invest in Iran’s port town of Chabahar to counter Gwadar in Pakistan next door, apart from gaining access to Afghanistan. In addition, Japanese funds for upgrading India’s own infrastructure within and initiatives with India’s immediate neighbours like Bhutan, Bangladesh and Nepal (even though the Nepalese are increasingly veering towards China) are on offer without the stringent conditions that China imposes. Most importantly, New Delhi has always obsessively guarded its strategic autonomy, and that would be lost once in Beijing’s embrace. It is this factor more than any other that has prevented Delhi from settling down for good in Washington’s camp.