Being Doubtful in a Secular World 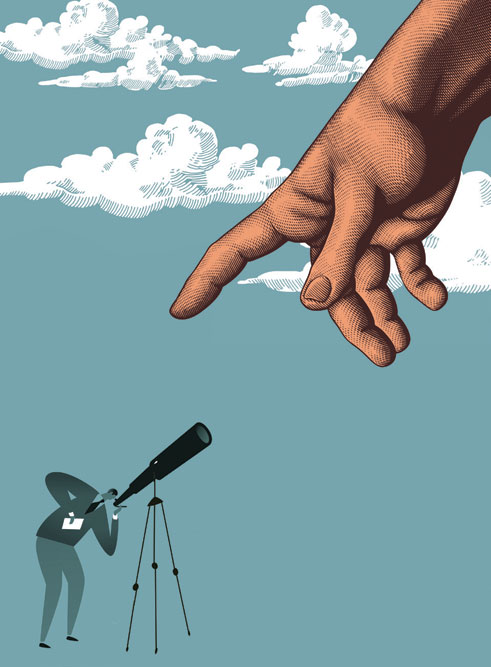 
AS A CHILD, one of my well-honed stratagems when dealing with my mother’s seemingly infinite powers was to undermine her diktats by asking ‘How do you know?’ ‘Go to bed, you have school tomorrow!’ would be met with a healthy dose of scepticism. I no longer remember where I picked up that line. Perhaps it was from Byomkesh Bakshi, the Sherlock Holmes of Kolkata, who was for a while my hero. Irrespective, ‘How do you know?’ is a strange formulation to deploy, not just as a child but in general. Depending on where the emphasis is, the question’s centre of gravity changes. Stress the ‘how’ and you are face to face with millennia-old philosophical debates about what pramana, which Parimal Patil translates as ‘instruments of warranted awareness’, facilitates knowledge. But if you stress on the ‘you’, a child’s innocent question acquires political urgency. How does an individual—as a woman, as a citizen, as a human—come into possession of a body of knowledge? And if we are to stress on the ‘know’, the question metamorphoses to acquire epistemological colours that asks what explicit specifications allow us to ‘know’ something.

I was reminded of this conversation when I read recently that in ‘a survey of more than 25,000 people across 10 [Arab] countries… identified a marked rise in the proportion of people describing themselves as ‘not religious’—from 11% in 2012-2014 to 18% in 2019’. While it is premature to read too deeply into this, the history of doubt, disenchantment, disbelief and ultimately atheism have emerged from various inflections of the question ‘how do you know?’ The answers to the first style of questioning—how do you know what you claim to know?—birthed forms of empiricism (such as Descartes in France) or new categories in metaphysics (such as Raghunatha Siromani in Nawadwip), which in turn began dismantling an elaborate scriptural or mimamsaka (ritualist) way of apprehending the world. The answers to the second question—how did you come across this knowledge?—led to a fundamental re-evaluation of how institutions form, cohere and ultimately facilitate or inhibit the freedom to acquire knowledge—and ultimately freedom itself. The answer to the last question—what does it mean to ‘know’? what is ‘knowledge’?—has led to the creation of new disciplines—from history in the 19th century, econometrics in the 20th century to artificial intelligence in the 21st century—each of which opened new vistas of what ‘knowing’ and ‘knowledge’ mean.

All this may lead us to think the history of disbelief is linear—one of progressive disenchantment. But unfortunately, this history is subtler and more complicated—one that we still fail to fully understand to any satisfaction. Perhaps this is best seen by taking two valences of belief itself. Karen Armstrong, a former nun and a popular writer on religion, writes that ‘until the advent of the modern period, nobody would have regarded the six-day creation story [of the Bible] as a literal, historical account’. This is not a new claim, for other educators like Ninian Smart have written earlier about ‘factual’ myth as opposed to ‘fanciful’ myth. In contrast, Charles Taylor, the great Canadian philosopher, rhetorically asks, ‘Why was it virtually impossible not to believe in God in, say, 1500 in our Western society, while in 2000 many of us find this not only easy, but even inescapable.’ What these two examples—the rise of literalism and decline of religiosity—represent is the strange coming together of two dimensions of belief: we could very well become secularised (our need for ritual and magic as explanatory variables in daily life vanishes) but our understanding of scriptural texts becomes exceedingly literal.

Despite such multiplicities ensconced within the carapace of disbelief, unbelief or atheism, it is often shoehorned as a byproduct of progress. Thus, when somebody like the German philosopher Karl Löwith argues that this belief in progress, and implicitly godless secularisation, is merely a rehash of ‘Christian futurism’ (the anticipation of end times)—to him, any history of doubt is merely an abandonment of religious doctrine. In contrast, Hans Blumenberg—another German philosopher, who ought to be read more—offers another genealogy of secularisation where disbelief is an emergent phenomenon. For him, the secularisation that we see in the modern West and its distant enclaves was born from a continuous struggle between Copernican and Ptolemaic models of the world. This ‘quarrel of the ancients and the moderns’, in turn born from the marriage of the almanac and telescope, debate and disputation, spread into other fields of human experience. Further, with an increase in the corpus of astronomical knowledge courtesy the efforts of hundreds of participants, it also led to the belief that any new totality imagined was solely a consequence of man’s efforts. Any history of doubt and disbelief in the modern world arose, like amrita and halaahala, from the churning of that sea of knowledge thanks to ‘human self-assertion’. Our secularised present therefore is an infinite number of such churns concurrently underway, each borrowing from that original structure of Copernican conflict.


‘Progress’ imported from other parts of the world doesn’t lead to doubt, disbelief or even atheism at home but a form of dislocation with uncertain consequences

In contrast to both Löwith and Blumenberg, the history of Indian disbelief adds another wrinkle. By the 9th century, Indian astronomy had two predominant models to describe the cosmos: the Puranic model (with the earth as a horizontal disk with the Mahameru at its centre) and the Siddhantic model (with the earth as a fixed, non-rotating sphere). When faced with these two competing paradigms, the 9th century astronomer Lalla critiqued the Puranic model unequivocally in his treatise Sisyadhivriddhidatantra for failing to accord with empirical facts. Yet, as Christopher Minkowski shows in his fascinating survey of changing beliefs, from the 15th century onwards there is an increasing proliferation of ‘avirodha’ texts (where astronomers make efforts to reintegrate the Puranic model within the Siddhantic corpus). By the 19th century when the East India Company’s own sastris began to valorise Copernican models over the Siddhantic ones, ‘the learned in Poona, Nagpore, Oojain, Sagar, and Benares’ wrote counter texts, including one memorably titled Virodhamardana (the Crushing of Contradictions). Yet, by 1841, as some of the sastris ended up teaching newly developed university curricula in places like Banaras and Calcutta, Copernican astronomy made formal entry into the Indian education system, even as they continued to use Siddhantic and Puranic systems in their private lives. Elsewhere, AK Ramanujan wistfully notes that his father was a famous mathematician but also an astrologer, who no doubt was well versed with the machinations of Rahu and Ketu.

What then are we to make of such beliefs—the immanent and the transcendent—that co-existed in the hearts of 19th century Indians and continues to flourish today in many parts of the world. One obvious answer is that the convenient histories of doubt, disbelief and atheism that we have told ourselves are manifestly inadequate—and most likely false. ‘Progress’ imported from other parts of the world doesn’t lead to doubt, disbelief or even atheism at home but a form of dislocation with uncertain consequences. It may lead us to enter a strange world where secularisation and literalist readings can co-exist. A more provocative answer is that all our narrative histories frame these things in a manner where philosophers and intellectuals write their texts and the people, after having read it, abandon belief. Such a causality not just privileges the text and the historian’s need to account for his descriptions via primary sources, it is also a model of knowledge dissemination common in academia where text precedes practice. Yet, it is likely that any articulation of doubt can only emerge in a society where, there pre-exists not just a culture of scepticism, speculation and disbelief but also the very practice and space to express doubt. We just don’t have a name to describe this in-between world of beliefs and non-belief, where both co-exist, like twins in a womb, recognisable and yet foreign to each other.