Be a Case Study on a Plate

My diet is now curated by science—and I’m happy 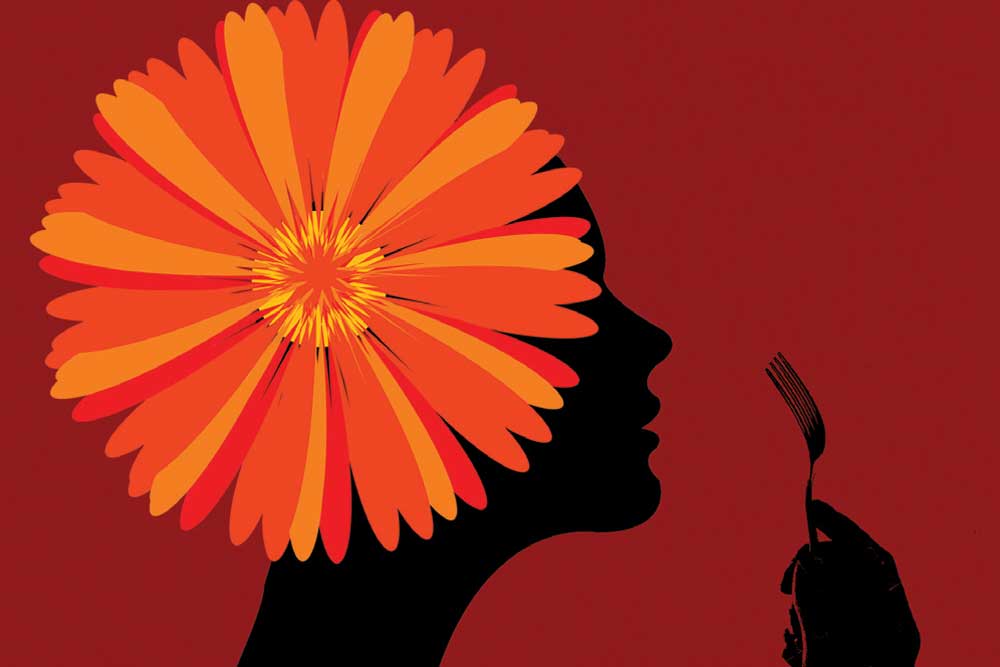 RECENTLY, MY routine blood test results showed extremely high levels of cholesterol, of the LDL variety. Add to that, a blood group (A+) that is sensitive to allergies, diabetes and cardiovascular diseases, I felt like Jerome K Jerome in Three Men in a Boat, flipping through a medical dictionary and experiencing all the symptoms of every disease from A–Z, including the housemaid’s knee (which was the only one Jerome did not have).

Unlike the appendix, it seems that cholesterol is quite important as it helps form the structure of every cell in the body. Low-density lipoprotein is supposed to be bad cholesterol because it tends to build-up plaque in the artery walls and slows the flow of blood, triggering heart disease and attacks. HDL, usually called the ‘good cholesterol’, carries the bad cholesterol back to the liver.

I promptly rushed off to a cardiologist who tut-tutted and said I ought to begin taking statins to reduce my LDL level. Is it so bad? Isn’t there a debate about it, I enquired. A Texas A&M University study examined 52 adults from ages 60 to 69 who were in generally good health but not physically active, and none of them were participating in a training programme. The study showed that after fairly vigorous workouts, participants who had gained the most muscle mass also had the highest levels of LDL cholesterol. Other recent studies have pointed out that there was no causal association between high LDL and heart disease. Also, it is not the actual number but the ratio of total cholesterol-to-HDL that is important; the smaller the number, the better. For example, someone with a total cholesterol of 200 and an HDL of 60 would have a ratio of 3.0 (210 ÷ 70 = 3.0). If that person’s LDL was high, let’s say 290, then the total cholesterol-to-HDL ratio would be higher: 5.1.

The cardiologist pointed out that ratio-wise, mine was in the higher range. As for the causal issue, he said that until there were more scientific studies on the matter, he would go along with the conventional view that high LDL showed that something was off kilter. In any case, you only have to take a small tablet, he said. One small tablet taken over a period of months and years can cause side effects such as headaches, nausea, dizziness, difficulty with sleeping, etcetera.

Nope, I want to try and contain it through diet and exercise, I said, having never ever followed a diet. For me, diets equal deprivation, and I don’t do well with being deprived of anything. He looked doubtful but asked me to do it and return after six weeks. Could he recommend a good nutritionist, I asked. He shook his head. They give you charts, but frankly, I don’t see much improvement from their advice. Why don’t you design your own diet, he said. Just avoid milk products like cheese, egg yolks, fried food, and sweets. Sigh, no quiches topped with a sharp pecorino cheese, no spaghetti carbonara, no fried eggs or Eggs Benedict—my dinner for the past six months. Arise ye deprivation pangs!

I approached a lower LDL-cholesterol diet in the same way I would design a study. First step, collate research on all the elements needed to reduce cholesterol. I examined articles in medical journals to see if diet alone made a difference in lowering LDL cholesterol. Turns out, I am like most patients with high LDL levels. The first thing we say is: can we deal with it without medicines and simply through diet?

For diet, I followed the principle that eating what folks in one’s genetic lineage ate would be healthier and more importantly, would be deeply satisfying to the cells in one’s body. Being a south Indian, I would eat dosas, adai, idlis and vegetables (tinda, pumpkin, potato, drumstick, beans, etcetera) cooked from recipes in a 1950s South Indian cookbook, Cook and See by Meenakshi Ammal.

Your body needs to fast. Only then will it get moving, a bit like a Bougainvillea plant, which flowers after you first starve it of water and then water it copiously

The problem with only focusing on one’s diet is that it is not very effective. One study found that even the very low saturated fat, low cholesterol diet American Heart Association Step 2 diet only minimally lowers serum cholesterol. Low fat diets prescribed in the West rarely produce significant LDL declines. One of two exceptions is the Dean Ornish-style diet, a vegetarian one consisting of fruits, vegetables, soybean products, non-fat milk and yoghurt, with no oils or animal products. Ornish believes that oils are fundamentally unhealthy. On average, Ornish’s patients lost 10.8 kg in a year and reduced LDL cholesterol by 37 per cent. Importantly, there was a 91 per cent reduction in angina frequency and a significantly lower risk of heart disease. The second exception is the Mediterranean diet which is rich in fruits and legumes, and uses olive oil.

Along with diet, exercise and low stress were key, and came to occupy starring roles in my programme. Four to five mornings a week, I would play tennis for 30 minutes followed by 15-20 minutes of very slow jogging (at a pace that would allow me to carry on a conversation in a measured tone). The running was recommended by a physiotherapist/doctor who said that 20 minutes of doing that was enough to keep most diseases at bay.

For low stress, I advised my near and dear ones to practise generating a gentle and humour-filled atmosphere whenever I am in their vicinity. Of course, this means no criticism or judgmental behaviour vis-à-vis me, and adjusting to the way I like to live my life. I also decided to start Vipassana meditation, which I never practised after returning from a ten-day session a few years ago. I planned to do it for about 15 minutes every day. And spend some time in my garden communing with my roses and wisteria and the palm trees. And switch off Gmail over the weekend, and spend Sunday reading novels and non-fiction or watching Modern Family or a thriller. No TV news either.

A month has now gone by. Exercise: Yes, I played tennis consistently, but did not jog that often. Confession: I rarely practised Vipassana. But I have tried to not worry about deadlines or stress about things that need to be done. I had read a New York Times article on the perfect diet—large breakfast, less large lunch, and a small dinner. Your body needs to fast, said the study by Dr Hana Kahleova and others quoted in the newspaper. Only then will it get moving—a bit like a bougainvillea plant, which flowers after you first starve it of water and then water it copiously. Front-load calories early in the day to jump-start metabolism and prevent obesity, it said, pointing to a recent review of the dietary patterns (over seven years) of 50,000 adults, all Seventh Day Adventists. The American Heart Association too has endorsed the principle that the timing of meals may help reduce risk factors for heart disease, like high blood pressure and high cholesterol.

Super. I love breakfast. I promptly wolfed down a banana before tennis, and after I returned, had a second banana, watermelon juice, and porridge, and at about half past nine, had a hobbit-like elevenses of adai (an uttapam-style pancake made with lentils), coffee and coconut juice. Kept body and soul together till lunch, which was usually two vegetables, a kadi, a bowl of yoghurt, lassi and a roti made with some ancient grain. Kahloeva found that in relatively healthy adults, eating less frequently, no snacking, consuming breakfast, and eating the largest meal in the morning may be effective methods for preventing long-term weight gain. Eating breakfast and lunch 5-6 hours apart and making the overnight fast last 18-19 hours may be a useful practical strategy.

You may point out that Kahleova’s subjects were Seventh Day Adventists who are vegetarian, and abstain from alcohol and smoking; so obviously they are going to be super-healthy compared to the rest of us who are none of the above. But the principle underlying the ‘eat early and eat big breakfasts’ has wider ramifications that apply to all of us. The logic is simple—the body’s organs, particularly the digestive process and the insulin functions, appear to perform at peak levels earlier in the day, and become more sluggish in the afternoon and slumber at night. This means that a big dinner is not going to be metabolised quickly, and will hang on to your body as fat deposits. Experiments on mice prove it. Mice which were given high fat diets for eight hours a day did not become obese or diabetic despite consuming the same high calories as their compatriots who ate around the clock.

The problem with scientific studies is the multitude of maybes and probables that litter their conclusions. Most are hedged in by comments such as: the study was observational only or there is no cause-effect takeaway from the results, and so on. You therefore have to commit to one study and its findings. On the food and timings front, I decided to adopt Kahleova’s advice, while Cook and See saw me through to the composition of the diet.

I can only speak for myself. I feel healthier, am carrying less weight around and have a general sense of well-being. I don’t experience any sense of deprivation, and I certainly don’t feel hungry after my simple night meal. If you plan to follow a similar regimen, my only advice is to find the food that satisfies you at a deep level, and create your diet accordingly.