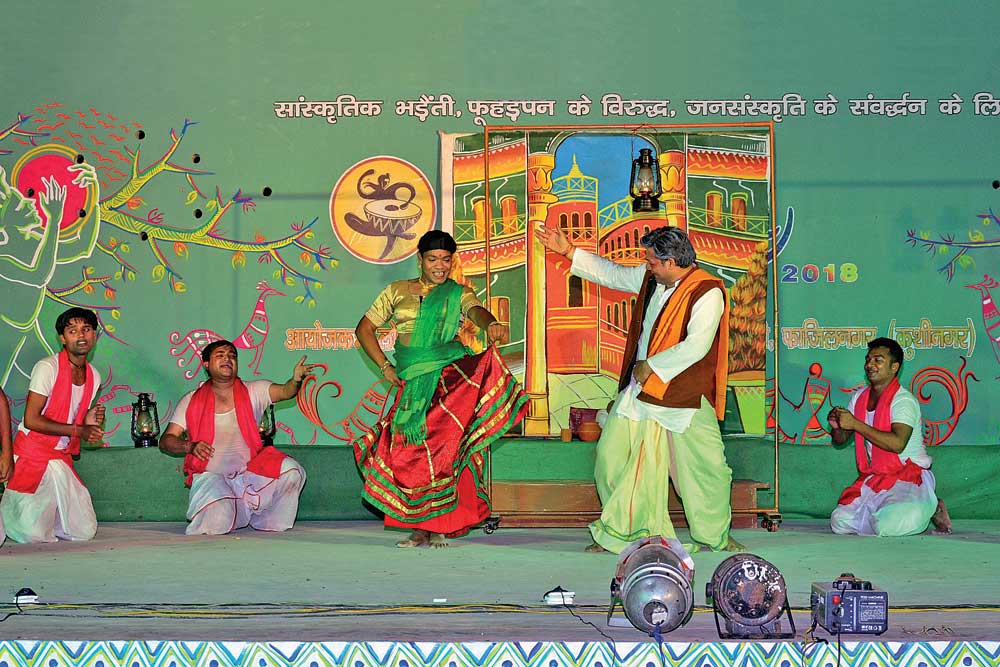 EARLIER THIS YEAR, a unique play came to Kushinagar, Uttar Pradesh. Titled Netua, it unravelled the many layers underlying the folk art of Natua Naach (literally, ‘theatrical dance’), practised by Dalit men in Bihar. Directed by Dilip Kumar Gupta and staged by the Cyclorama Theatre Group, it brought out the deep crevices of exploitation and oppression that this performing art form addresses. The play traced the story of Jhamna, who takes up natuagiri (drama) as a profession. Over time, the young boy forges an indelible bond with this craft, realising his hidden potential. But his journey of self-discovery meets a cruel fate, as he ends up being sexually exploited by landlords.

Jhamna’s story unfurled to a packed theatre, with an opening act showing a young boy, attired in a female garb, dancing to the lilting tunes of Inhi Logon ne Le Liya Dupatta Mera from the yesteryear hit Pakeezah. Seated in the audience was Rohit Kumar, a theatre practitioner and scholar based in Rohtas, Bihar. The play took him to his childhood days, when Natua Naach would be staged as part of various festivities. Dusk would resound with sounds of the nagaada, as men, dressed in vibrant lehenga-cholis and faces caked with make-up, would dance and sing tales of valour, love and revenge. Of course, this was followed by a severe scolding by his mother for having watched young men dance through the night. She frowned upon such evenings marked by boisterous revelry, often peppered by sporadic fights. She didn’t consider them suitable for a boy growing up in an academic environment.

The scenes from such evenings have lingered on in Kumar’s memory. Which is why, many years ago, when he took up theatre as a practice, he decided to delve into the history of this unique performing art. Based on Dalit folklore, this folk art has for centuries provided a platform for marginalised communities to challenge caste inequities and social hierarchies in the region. Usually performed during harvest festivals, marriages and fairs, Natua Naach has helped the community establish its cultural identity and claim a space in the culturescape of Bihar.

It is this aspect of Natua Naach, as a means of dissent, that interests Kumar. And today, he is traversing northern Bihar to document this by speaking to practitioners, folklorists, writers, singers, audience members, and others. “He is interested in looking closely at a platform that allows the community to criticise without mincing words. And also how it acts as a unifying factor within a diverse community,” says Tanveer Ajsi, who runs the arts research programme at the India Foundation for the Arts, Bengaluru, which has aided Kumar’s endeavour through a grant.

A conversation with Kumar is almost visual in nature, as you can picture the art form’s journey. It dates back to the 15th century and was devised by a community cut off from mainstream arts. But even then, Natua Naach, which sought to break the shackles of societal stigmas, couldn’t be entirely egalitarian. It kept women away from the performance arena. A couple of centuries later, at the height of colonial rule, another version of this form came into being: the ‘Launda Naach’, again performed by the Dalit community of Bihar. “So, males would take on the role of women. In the beginning, it was a means of entertainment during festivities. Slowly, Dalit lokgaatha (folklore) started creeping in. Artists started responding to the political climate of the times, and Natua Naach took on the role of pratirodh (resistance),” says Kumar, whose research explores this part of it.

Though there are several Dalit tales that are commonly staged across Bihar, he is focusing on the prominent ones such as Dina-Bhadri, Reshma Chauharmal and Raja Saleh. The tale of Dina-Bhadri seems straight out of the movies: it features two brothers who are said to be so strong that they can carry a bow and arrow weighing 80 maund (an Indian metric system, in which one maund equals 37.3 kg). “They wanted to work independently, and not toil for a feudal landlord. But the sister of the local ruler couldn’t stand this,” he says, and she decided to poison the waters of a well. This led to an outright war, with Dina and Bhadri defeating the ruler. However, an evil trick resulted in the duo being killed and the two brothers take birth again to avenge their death. “This lokgaatha has found its way into the movies as well—take Karan Arjun, for instance. I am also trying to find a connect between these lokgaatha and cinema. My research is throwing up some interesting bits of information. For the Dalit community, Dina and Bhadri are like Ram and Lakshman,” says Kumar.

THE OTHERLOKGAATHA, of Reshma and Chauharmal, is about an upper-caste woman who falls in love with a man of the Dalit community. When she professes her feelings, Chauharmal says that they could never have a future together. “It is about a woman’s revolt against these hierarchies,” he says. Ironically, these feelings are depicted on stage by men.

Given that most of these songs and stories have been passed down orally, it becomes even more important to document them. Apart from a couple of academic books, one can’t find references to these anywhere. “Only, when these are staged at a mela, the performing groups get really thin booklets printed about the story,” he says. So far, he has only come across a booklet of Reshma Chauharmal in Maghai. “Natua Naach originated in the Mithilanchal area and is usually performed in three languages: Maithili, Maghai and Bhojpuri. Of these, Maithili has a script, but the other two are bolis (dialects),” says Kumar.

There was a time when a Natua artist could sustain his household with regular performances. However, with artists now migrating to cities in Punjab, Haryana, etcetera, for work, these performances have gotten scattered across the year. “So, now the artists fix a date, such as Buddha Purnima, when they all gather in their village and stage a performance. No matter where they go, they try not to break their connection with the folk form,” says Kumar. The one question he asks all artists is, why are they holding on to the art? “And they all say, ‘Yeh humaari aastha hai (this is our devotion)’,” he says.

In such a scenario, it is vital for modern-day practitioners to bring Natua Naach into the fold of contemporary theatre as well—to offer sustainable livelihoods to artists so that they can practise their art without the sword of financial uncertainty dangling over them. “I too am trying to incorporate the major elements of Natua Naach in my theatre practice,” he says.

“Natua Naach requires so much energy. You have to sing, dance and act the stories out, from dusk to dawn. Moreover, you need to have all the songs seared into your memory” – Rohit Kumar, researcher

So, what are the various elements that make up Natua Naach? “The most important ones are gaana and naach,” he says. Song and dance. Also, no performance starts without invoking Goddess Durga and a local devi-devta. Also, a lebera, or jester of sorts, acts as a sutradhar or narrator. Typically, a show starts at 6 pm and goes on till 6 am. “Now, that some villages have been electrified, it can also start at 8 pm. The use of nagaada, dugdugi, dhol and sarangi is also a major element of the act,” says Kumar.

One would have thought that the advent of CDs, cinema and the internet would have diminished the popularity of this folk-art form, with people turning to other means of entertainment. But that has not happened. “Natua Naach has somehow managed to sustain itself, keeping in sync with the new technology. It has kept up with the changing needs and aspirations of its audience,” says Ajsi. Of course, some changes have crept into its production aspects. In most places, amplifiers, drum sets and electronic music have begun to make an appearance alongside traditional instruments; in others, live singers are brought in to support performers who might be good dancers but are not equally skilled as vocalists. In some others, Bollywood songs are being combined with traditional folk ones. This change was reflected in the play Netua as well. However, performing a Natua Naach isn’t everyone’s cup of tea. “It requires so much energy. You have to sing, dance and act the stories out, from dusk to dawn. Moreover, you need to have all the songs seared into your memory,” says Kumar.

With its traditional artists having migrated to other cities, performers from other communities have begun to adopt the folk form. Kumar met one such artist, Shambhu Mandal, during his recent travels. “He is from the OBC category, hails from Supaul zila, and is manager of the Baba Musical Group. He is called in to stage these performances by political parties during elections when they seek Dalit votes. He doesn’t like this practice, but can’t help it, as he has a family to feed,” says Kumar.