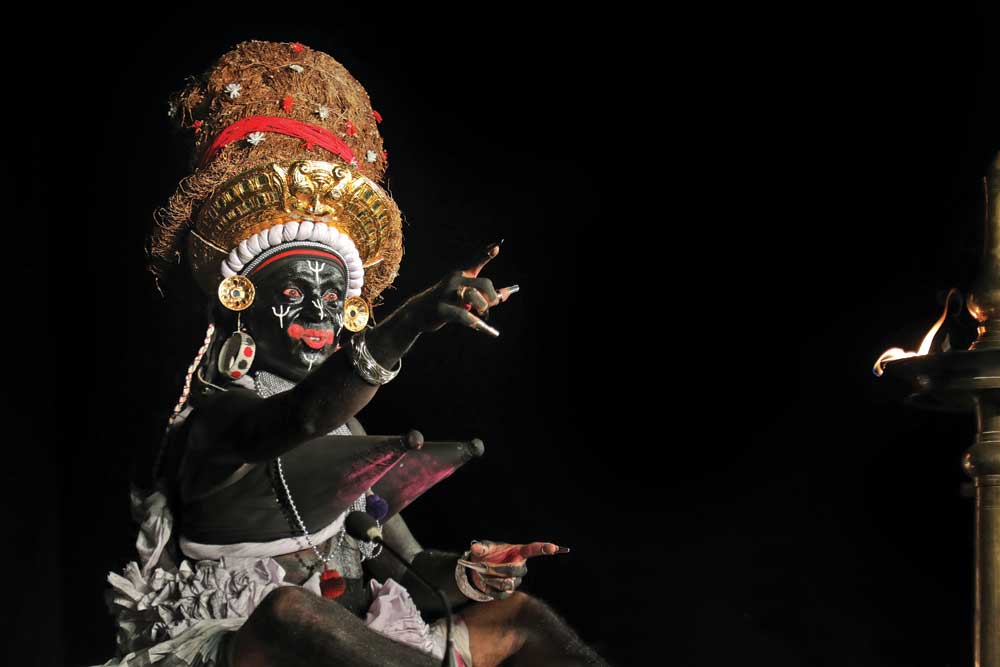 YOU CANNOT RUSH Koodiyattam. The only surviving Sanskrit theatre tradition that is more than a thousand years old, it weaves between memory and the present, defying ideas of time and linearity, working to its own logic, ticking to its own clock. And you, the viewer, will simply have to rein in that need for speed.

“Sometimes a performance includes long moments—an hour or more— when nothing moves on stage except the actor’s eyes,” noted David Shulman, the renowned scholar of south Indian languages.

It is only the second day yet of the six-day play spun around just the second act of Sakthibhadra’s masterpiece Ascharyachoodamani, written probably around the 10th century, based on the Ramayana. The royal couple from Ayodhya are in exile and as they settle into the idyll of Panchavati, Shurpanakha, freshly widowed and grieving, is wandering the earth in search of a husband. She falls in love with Rama, is rebuffed, insulted and mutilated, setting in motion horrific events that will end badly for all.

But there are three days to go before tragedy strikes. So, in typical Koodiyattam style, let us wind back to where we began—to Lakshmana building a hut with exaggerated devotion to detail. He clears the rough forest patch, unearths stones, heaves and throws away heavy rocks, pitches a peg each in four corners, sets up poles, finds fronds, splices them, weaves them together, lays them across, fashions a rope from barks to lash the four corners, crafts chairs from bamboo, wets the earth… and finally collapses from exhaustion that lasts nearly an hour.

So effective is seasoned Koodiyattam actor Margi Madhu’s detailing of the exertion on stage as Lakshmana that you will feel the weariness of aching muscles.

Contradictory adjectives suit Koodiyattam— slow yet action-packed, languid yet dynamic, cerebral yet emotional. It isn’t that there aren’t any moments of spectacular drama; Shurpanakha, bloodied and torn, screaming in pain will appear in the last horrifying hour of the final day but only after five days of slow build up.

This was a rare performance of sampoorna (long-form) Koodiyattam. In their original telling, Koodiyattam plays, performed as rituals in temple precincts, lasted anywhere between 10 hours to 41 days. But with attention spans dwindling and competition from fast flickering images artistes now mostly offer abbreviated capsules.

“I have no doubt that it is the full act of Koodiyattam that has artistic integrity, expressivity and rich nuancing,” says Shulman, professor at the Departments of Asian Studies and Comparative Religion at Hebrew University, Jerusalem. “You need time for the full feel of its beauty. In its short form, you miss its essential, aesthetic poetic logic. This is a transformative art.”

Only in Kerala’s temples, and as ritual offerings, are complete Koodiyattam acts presented regularly, usually to scant audiences—for example at Guruvayoor, Vadakkunnathan Koodalmanikyam and Thriprayar. On the secular stage, the norm is to crunch the plays into a couple of hours.

For 10 years now, Shulman has been leading a mission to revive full-length performances at Nepathya, a Koodiyattam centre run by Margi Madhu in Ernakulam district.

Among the small league of Koodiyattam artistes, there are about 20-25 at their peak currently. There is an effort now to reclaim its original expansive form. It is something of a lone battle though.

“This movement for revival of full- length plays is something that committed artistes are leading. It isn’t as if we are being backed by audiences, the government or institutions. Whether we have one person watching or 10, we do the whole play. I certainly train youngsters to do that,” says Madhu.

This July, the Ammannur Gurukulam in Irinjalakuda, Thrissur presented all the 217 shlokas of Sreekrishna Charitham in Nangiar Koothu, a subset of Koodiyattam performed only by women on the life of Krishna. Two years ago, the Kutiyattam Centre in Kerala staged Mantrankam, featuring Kalamandalam Rama Chakyar and Sangeeth Chakyar. The longest play in the Koodiyattam repertoire, it is spread over 41 nights, as a traditional ritual at the Peruvanam temple.

Sangeeth Chakyar says he hosts and enacts, with no outside support, full-scale performances to keep his skills alive. “I have this treasure lying within me, I don’t want to tie it up in a bundle and leave it in a corner,” he says. Other artistes such as Kalamandalam Prasanthi, Jishnu Prathap, Indu G Kalamandalam, Kapila Venu too are trying to complete entire acts at various venues.

“It follows a universal language of theatre, and once you are into it, it offers an immense possibility to engage with the human story it tells” – Sudha Gopalakrishnan, founder, Sahapedia

KOODIYATTAM IS NOT without its critics—those who find it too slow, too elitist, too remote, too arcane for the modern world. And ironically enough, as is the case with most similar Indian arts, it draws fuller houses abroad than in Kerala.

To understand why Koodiyattam remained more remote than Kathakali, synonymous with Kerala in popular imagination, it is necessary to delve into its past. Over the many centuries of its existence, Koodiyattam had remained a preserve of the upper castes. It was a temple ritual, played out only in Sanskrit, and could only be performed by Chakyars, a subsect among ambalavasis , the Brahminical order that serves in temples.

Koodiyattam cultivated a small and insular circle of erudite audiences—it must be remembered that only upper castes were allowed into Kerala’s temples till 1936. And since the temple economy supported the art, it never felt the need to leave its elite embrace. The Chakyars lovingly and dutifully saved this rare art but also kept it a closely guarded treasure. Thus conserved in a vacuum, Koodiyattam survived in its pristine form. All that began falling apart once the feudal systems that supported the temple economy started crumbling in the early decades of the 20th century. The art lost its patronage and Chakyar families have stories of times when they continued to perform despite abject poverty.

The first time the art left the temple was in 1949. And it was a veritable cultural revolution. Painkulam Rama Chakyar, a trailblazing visionary artiste, took koothu, a satirical form within the Koodiyattam repertoire, to a secular platform. Then again in 1956 he performed Koodiyattam at a public venue. Not just that, he braved the hostility of his own community to teach non-Chakyar students at Kalamandalam (a centre for performing arts) in 1965.

An art that generally kept women in the margins, except in Nangiarkoothu, Koodiyattam finally allowed artistes like Kalamandalam Girija and Kalamandalam Shailaja on stage in the 1970s.

Koodiyattam finally emerged in the world inhabited by everyman. “When Painkulam Rama Chakyar brought it out of the temple and took it to the secular stage it was important to present smaller units that could be disseminated easily among new audiences. It was the need of the time,” says Sudha Gopalakrishnan, founder of Sahapedia, the open online arts and culture resource, and the force behind the Delhi event.

But after two decades of exposure to larger audiences, it was time for a third rebirth for Koodiyattam—in its original long form—she says. And for this she credits the work of theatre artiste D Appukuttan Nair, who set up the Margi Koodiyattam centre at Thiruvananthapuram. “If we don’t bring back the complete form in Koodiyattam, it will suffer the same fate as Kuchipudi when an elaborate dance drama was reduced to a dance performance,” says Madhu.

THERE WAS WIDESPREAD fear in the 90s that Koodiyattam, especially long acts, would become extinct. Then in 2001, UNESCO recognised Koodiyattam as a masterpiece of the oral and tangible heritage of humanity. This created widespread interest in the art and brought in the funds it desperately needed.

In 2006, Shulman first saw Koodiyattam and recalls being fascinated and moved by it. When he realised that artistes were trained for complete performances but could only do short versions for lack of resources, he decided to look for support from his own university. Backed by the Hebrew University president, the renowned mathematician Menachem Magidor, funds were generated to support an annual full-length performance at Moozhikulam in 2008.

Shulman and 10 students arrived in Kerala that year for a 15-day performance of Ashokavanikankam. Since then every year, except in 2009, a student group led by Shulman stays at Moozhikulam for 15 days to a month, interacting deeply with a play, understanding the text and getting lessons in abhinaya from the Nepathya troupe.

So has much changed in a decade? “Sometimes there are 20 in the audience of whom 10 are my students. Sometimes a few more. I don’t understand why in its own home Koodiyattam doesn’t draw more people,” says Shulman.

No one, not even the most ardent Koodiyattam evangelist will deny that Koodiyattam is not meant for easy consumption. You have to educate yourself, figure out the play of mudras or hand gestures which form a huge part of the abhinaya. Unlike other classical performance arts from India it isn’t constantly backed by lyrical text.

“It is in Sanskrit, it is difficult to follow, all that is true but it is not an art for the few. It follows a universal language of theatre, and once you are into it, it offers an immense possibility to engage with the human story it tells. Love, rage, revenge, moral dilemmas of good and bad, these are played at every credible human level. How else did its very subtle but powerful energy get through to, say, students at Harvard who don’t understand Sanskrit or mudras?” asks Gopalakrishnan.

Performers and organisations have realised over the years that a little help can go a long way in engaging audiences. A screen is often mounted alongside the stage and a commentary usually in English helps decode the scene.

“I have recently seen that the idea of full-scale performances is catching on, and hope there is a new movement in Koodiyattam. Audiences seem ready to demand and accept the idea. The art has to find new sources of support without compromising itself. Maybe a larger audience can be built around a core group of prekshakas [viewers],” says Shulman. “I am optimistic.” 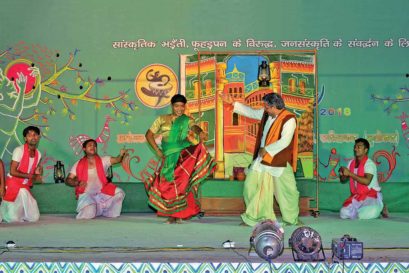