Malavika Sarukkai: ‘I wanted to fly’

Over the last five decades Malavika Sarukkai has reserved the right to dream in her performances. The Bharatanatyam dancer in conversation with Malini Nair 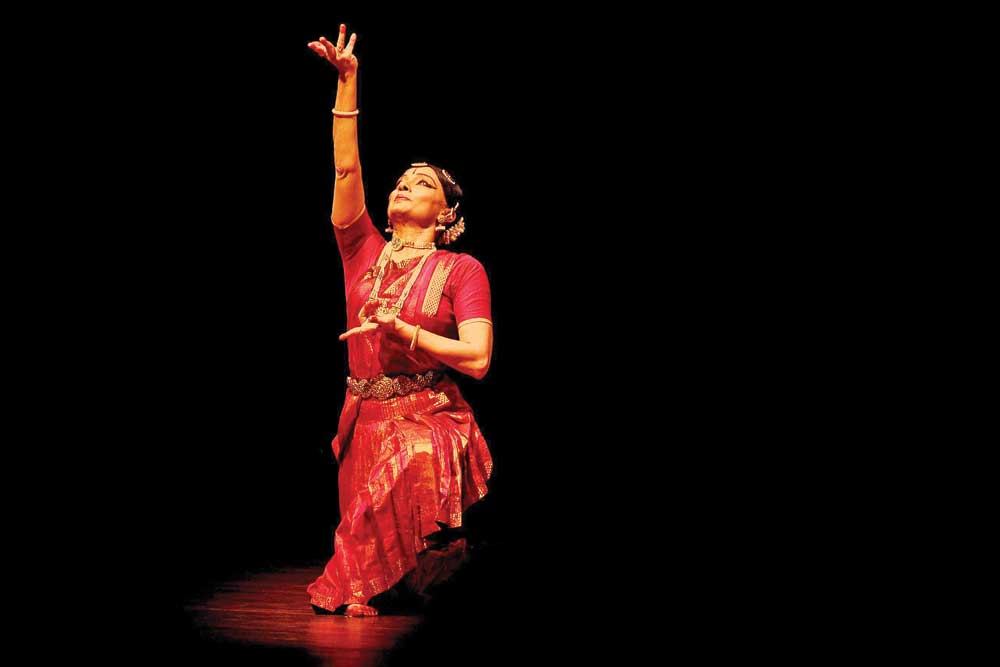 AROUND 25 YEARS ago, when ‘out-of- the-box’ was not yet a cool expression in classical dance, Malavika Sarukkai recalls staging Shad Ritu (Six Seasons) at the Triveni amphitheatre in central Delhi. It was well within the Bharatanatyam matrix, but it was still an experiment outside the margam, the ‘path’ prescribed by convention.

She remembers being very excited about the experiment, curious about how it would be received by dance lovers. The recital ended… to resounding silence. “There was this look of shock all around. Everyone looking at each other in dismay wondering how to react,” she recalls.

In the decades that followed, Bharatanatyam has come a long way and so have audiences. Thematic experiments are the order of the day and you have to be radical to stick with convention. There was, therefore, nothing muted about the enthusiastic audience response in Delhi recently to Thari, Saukkai’s new dance homage to India’s handloom heritage. People could barely wait to break into thunderous applause once her dancers froze in the final movement.

The clack of the loom is Thari’s heartbeat. It starts with the metaphor of the loom as life, and then moves into more metaphysical realms as the bird motifs on saris take flight.

Thari, says Sarukkai, was the most frightening leap into abstraction. And this comes from someone who revels in the abstract, the “extreme abstract”, she specifies. Neither her dance nor her conversations are available for easy consumption. Words like ‘resonance’, ‘inner journey’, ‘space’, ‘energy’ have been a part of her choreographic vocabulary long before they became new-age staples.

“I have moved away from the decorative aspect of classical dance. I want it pared down with sharpened body intelligence. For instance, why not represent sambhogam (sexual union) through purely rhythm and nritta (pure dance)? Why should everything spring from predictable abhinaya (expressions) and hasta mudras (hand gestures)?” she asks.

Sarukkai, 58, has a solid body of mostly solo works that spin around a concept rather than a straight narrative. Kashi Yatra was based on an eighth-century classic text on the life of a courtesan, Damodara Gupta’s work Kuttanimatta, and it drew great acclaim for its outstanding dance work and re-imagination. Thimmakka profiled a modern-day woman environmentalist from rural Karnataka.

Not all the projects that dot her 50- year career landed on their feet; some have been accused of being too fuzzy, too impenetrable. But if there is one thing that Sarukkai stays firm on, it is her dance philosophy. She reserves, she has often said, the right to dream and dare.

“I am in a creative zone. Dance is a very personal dialogue for me, a 24×7 thing that lives with me. I frame my expectations, no one else gets to do that for me,” she says.

With Thari, she says the canvas was blank to begin with, except the idea of the magnificent Kanjeevaram sari and how beyond its obvious shimmer, a new layer opens up every time you look at it. Then the idea of a taut warp and the weft that weaves itself around.

As she says, she really doesn’t have to head for tough terrains anymore, this is self-inflicted creative agony. “I wasn’t asked to create this work. I do so because I don’t want to stay in my comfort zone. I have built an excellent solo repertoire, but it isn’t enough for me.”

SARUKKAI HAS OVER the decades come to be so identified with the offbeat that it creates a louder buzz when she does something conventional. She still has the humour to laugh about her own reputation. For the forthcoming music season in Chennai, she says she has decided to return to varnam, the elaborate and embellished heart of the Bharatanatyam corpus. “My students told me, ‘Akka, people are saying you have forgotten to do the varnam.’ So I said, ‘Okay, let us show them that I can,’” she says, with a laugh.

Dance is a very personal dialogue for me, a 24×7 thing that lives with me. I frame my expectations, no one else gets to do that for me

Long accused of abandoning the traditional repertoire, Sarukkai says it was a journey that had to be made. “I get the varnam. I get the Devadasi cult behind it and the incredible music it has produced. But if I have the freedom to explore Thimmakka’s love for nature, or Yudhishthira’s dilemma, why would I stick around asking what are those nail marks on your chest, where were you all this time,” she asks, referring to the common tropes in the portrayal of love in classical dance.

It took her two decades of traditional Bharatanatyam, she says, to start questioning what was accepted as a given. But once she decided to switch tracks, it was with a creative vengeance. Her reasons for this make perfect sense today when dancers are questioning gender roles in classical dance, but it must have meant a radical leap of faith in those years. Many dancers rebel against the lovelorn nayika mode today, but did they in the 1990s? “I did the whole moonbeam, flickering lamps, and pangs of separation thing for 20 years and then I told myself, ‘You know what, I don’t want to do this anymore.’ I wanted to fly, allow myself to explore the open splendour of dance. And that was it,” she says.

She doesn’t dismiss classicism, but she would rather mine it for something deeper than the obvious. “I deeply love the classical, the alignment, the symmetry, the musicality and the core vocabulary. I often say this to students at Spic Macay lec-dems, ‘When you start learning the classical repertoire, it is like the fingers of two hands tightly interlaced, there is no room for playing around. But after a point you allow the grip to loosen up, allow new ideas to flow through. And what you will discover—if you are lucky enough—is that this is the gift of a structure that opens up.’ I have never had a creative block because my classical training doesn’t allow it,” she says.

She adds that classicism was a strong motif in her early intellectual life, which was deeply influenced by her mother and mentor, Saroja Kamakshi. And even today she has immense admiration for the divas of earlier generations like Vyjayanthimala whose margam shines brighter by the day.

“If I was dancing in the 1950s, the margam would have been perfectly in place. It was the way to go for a dance style that was establishing itself. But at this point Bharatanatyam has come a long way. I am not dancing at a king’s court. I don’t have to stick to any diktat about what I should do. I dance on a stage, my audience is different,” she says. “This is my story, I have lived it. Don’t push me into nayika mode, pining and wanting again, I have moved on.”

Sarukkai’s complaint with the old- style classical repertoire is that it is male- centric. “Dance time is too precious to stay in that mode,” she says.

Sarukkai started dancing at seven, training under Guru Kalyanasundaram of the Thanjavur School and Guru Rajarathnam of Vazhuvoor School. She took lessons in abhinaya from guru Kalanidhi Narayanan. And, as was often the case in those decades, trained in Odissi under Guru Kelucharan Mohapatra.

Her dance is known for its energy, fluidity, finesse and aesthetics. She is, as she says, at all times a dancer. Even when she is ordering a nimbu-paani or asking people to switch off truant phones, the eyes and arms and torso are in abhinaya mode. Throw in her chiselled features and it is difficult to take your eyes off her on stage or across the table.

For all the adulation, Sarukkai isn’t happy with how Indian society perceives classical dance, as a thing frozen in time—revered but not debated. At the top of her form, immensely popular and with many years of dance left in her, she is furious that no one takes classical dance seriously enough in India.

“So little is expected of classical dancers. Why? There is no discussion or discourse on what we do. Don’t tell me no one has anything to say to us? We come, we dance, we go. We are a society that simply doesn’t discriminate. No one says, ‘Here is a good dancer. Why not push for excellence in her work?’ Even at my senior level I feel the lack of validation,” she says.

It isn’t just the lack of funds and philanthropy directed at classical arts that bothers her, it is the assumption that somehow their talent just apparates on stage with very little behind it. “Kathakali dancers, for instance, take hours for their aharya (costuming). They use this time to centre themselves. Don’t we need that time for ourselves? Do people think we simply come, get on the stage and dance?”

SARUKKAI’S DANCE journey has been more or less a lone one. It was only with Vamatara that she started doing group work. She now also mentors select senior dance students such as Mythili Prakash and Jyotsna Jagannathan. “Training with me is hard work, you need stamina for that. There is no short cut to it. And I don’t encourage clones. I am not one of those dancers who loves to say, ‘My student dances exactly like me,’” she says.

Early next year, Sarukkai’s Kalavahini Trust will present four young classical dancers at the India International Centre in Delhi. She wants to launch new names in the field through this event. But don’t the annual classical jamborees, especially Chennai’s dance and music season, provide an effective platform for youngsters? “No. There is this mad scramble for slots among young dancers. Then they come, perform and vanish for three years. There is no discrimination between the good and the mediocre, they are all on the same platform. How will quality evolve? Many of them are so bewildered by the pushing and shoving, they give up. If they are good, allow them to get better, give them space to evolve,” she says.

Her showcase for the young will not be a seasonal affair, she maintains. She wants to curate the best of young dancers and invest in them. “In 10-15 years, they should be able to call themselves artistes, not dancers,” she says.