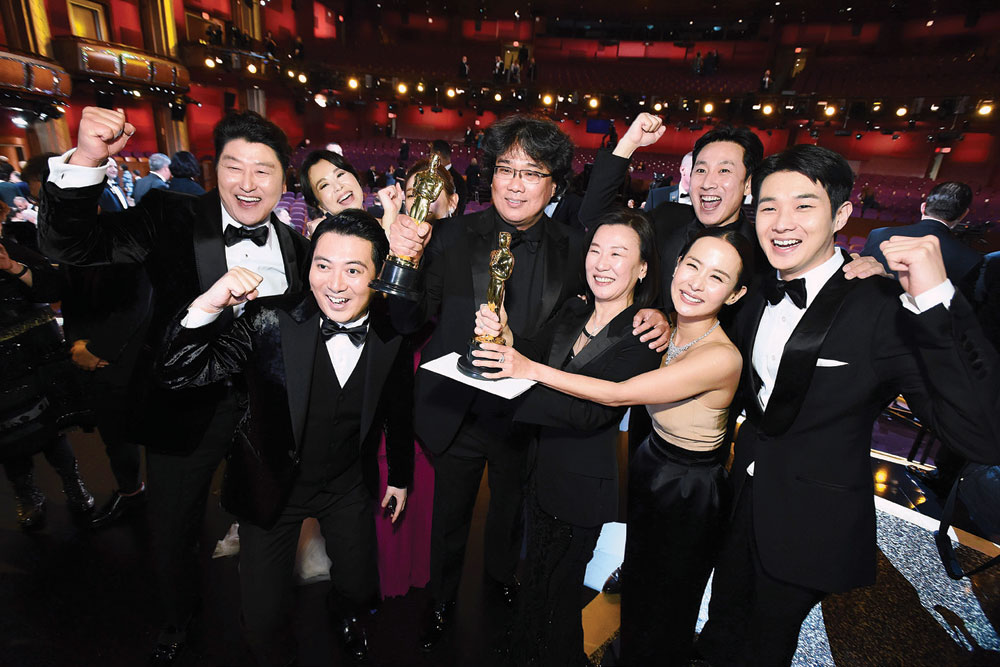 
IT IS WHAT it is,” says one man to another in a pivotal scene in Martin Scorsese’s The Irishman. In the film this line has a sinister undercurrent, being a gangster’s quiet warning: tell your friend not to rock the boat, or action will be taken against him. But these are also the words that most often come to my mind when asked to comment on Oscar choices and the big narratives surrounding this or that win.

Because, well, the Academy Awards are what they are. A grand, self-congratulatory carnival —often genuinely and stirringly sentimental—that has become by default the show, because of its long history in the world’s most high-profile film industry. A show that has, with a few notable exceptions, tended to reward a very specific sort of solid, middlebrow film: neither too radical nor too popular. To those who know Oscar history, the patterns and quirks have always been there, among them the neglect of comedies and comic performances, even great ones; the ‘holdover prize’ for a respected figure who didn’t win for his or her best work but must be honoured somehow; the strong bias towards films that are ‘respectable’ in superficial and obvious ways (but they mustn’t be too esoteric for a general audience).

In this light, it’s amusing to note that the two men in that Irishman scene are old and white (and played by Hollywood legends Robert De Niro and Joe Pesci)—the types whom we think of as part of the Establishment, the ones who make the conservative-seeming Oscar decisions.

This year, with top honours going to Parasite (a Korean film! with subtitles!), the Oscars departed from the ‘it is what it is’ formula. Even though director Bong Joon Ho paid effusive tribute to Scorsese during his speech—allowing us to think of the moment as a continuation of a cinematic legacy rather than a disruption—the Parasite win brought a sense of newness and danger to the proceedings, a sense that the Academy had gone a step further in recognising diversity than when it gave Slumdog Millionaire (a British film with Indian DNA) awards in 2009, or when it crowned Barry Jenkins’s Moonlight—an unconventional, low-key story with a protagonist who is both black and gay—three years ago.


Should the Oscars go international in this particular way? Does it make sense for an award ceremony that has always been about Anglophone cinema to move away from its core strengths?

In the wake of the ceremony, there was much chatter on social media, such as pedantic declarations about how the director had made better films; how he should have won for Memories of Murder. On the whole, though, the feeling is that a brave new world has been born. But while Parasite is in the books as the first non-English-language film to win best picture, this may not be the ceiling-shattering event it is made out to be.

Because Oscar does have a tradition of doing something unpredictable every now and again —in keeping with a zeitgeist—before returning happily to its comfort zone. And Parasite ticks many boxes for the sort of ‘international’ film that the Academy finds easy to endorse. It is from a country whose cinematic culture has long been celebrated by knowledgeable movie buffs; it is helmed by a widely admired director who has also made a couple of films in English (with American actors) and collaborated with Hollywood studios such as the Weinstein Company. It won the top prize at Cannes last year, had a buzz around it, and subtitles notwithstanding, it is fast-paced and translates well across cultures. With its twist-laden narrative about a lower-class family who infiltrate the lives of the rich, it works both as piercing class commentary—a ‘message’ movie—and as a clever thriller-horror-comedy. It’s easy to see why Parasite’s theme of ‘crossing a line’ (a class-related reference made in the story) may have been irresistible to the Academy when it set out to erase one of its own lines this year, to move beyond ‘it is what it is’.

Just to clarify, I have nothing against Parasite (though I wasn’t as blown away by the film). Its wins are worth celebrating, feeling good about, and using as a pretext to discover cinematic riches from Korea and other cultures (and getting over the fear of subtitles). But I do baulk a little when I see movie buffs exulting as if Bong Joon Ho had wrested the statuette out of reluctant hands by making a film that simply couldn’t be denied; as if the achievement wasn’t tied to a shift in the terms of admission and engagement within the Academy itself.

Consider some of the earlier filmmakers who ‘failed’ to win best picture, starting with the legendary Jean Renoir whose masterful La Grande Illusion was the first non-English-language film to be nominated for the top award, in 1938. Interestingly, 31 years would elapse before the second such instance—never mind that those three decades saw an extraordinary flowering of ‘world cinema’, from several countries, and the peak work of directors such as Akira Kurosawa, Jean-Luc Godard, Ingmar Bergman, Luis Bunuel, Yasujiro Ozu, Satyajit Ray and many others.

In other words, for much of Oscar’s lifespan, hundreds of iconic non-English-language films weren’t treated as serious contenders in the major categories. The eligibility criterion for a foreign-language film—it must have a Los Angeles release—was of course a sieve, but even the great foreign films that were eligible missed getting a Best Picture nomination. (Parasite is only the twelfth such film in that category. The list of masterpieces that didn’t make it is too long, but consider that Kurosawa’s Rashomon and Seven Samurai were nominated only for technical awards such as art direction.) While there was honesty about the fact that the major awards were reserved for American (sometimes British) films, there was also some tokenism, which muddied the waters. For instance, the period 1960 to 1979 saw a total of 16 best director nominations for non-English-language films—no wins, and never more than one such nomination in a year; this amounted to proclaiming that the Oscars were a truly international award, but that four of the five supreme directing achievements in a given year just happened to be American.

Of course, horizons have broadened at different times in Oscar history, whether it is Sidney Poitier’s best actor win in 1964 or Linda Hunt winning best supporting actress for playing a male character in 1983. You might say, why argue with progress?

But does the Parasite win signal a real shift towards inclusivity? How meaningful can such a shift be? And there is the broader question: should the Oscars be going international in this particular way? Does it make sense for an award ceremony that has always been about Anglophone cinema to move away from its core strengths, and to attempt—with inevitably unsatisfying results—to become all things to all cinemas? When you set out to do that, it can’t be half-measured. You have to be able to encompass a number of forms, styles and culture-specific content, including works that don’t translate well, even with good subtitling.

Around 15 years ago, I had an online chat about the best foreign-language film category with a fellow film buff (and future director). The context was Lagaan losing to No Man’s Land, and we agreed that these movies represented such different schools that comparing them was hubristic. The foreign-language film category pretended that there was a single yardstick by which movies from around the world could be judged—and that this could be ‘objectively’ done by an American academy, the majority of whose members have been reared on narrow ideas about what good cinema or good art should look like. That’s an insult to the variety in the medium.

Now that the floodgates have opened and films like Roma and Parasite have become serious contenders—even winners—in the main categories, this discussion applies to all of the Oscars, not just to the foreign-language-film award.

I don’t know if this is a workable option, but I wish the Academy would let the main Oscars stay as they mostly have been, and to follow something like the Man Booker Prize model: have a separate ‘international’ ceremony—with the same award categories—for non-English-language films. Retain the Oscar brand and prestige, put together juries of people who are so diverse in their tastes—and in their exposure to different artistic expressions— that it will be almost impossible to predict, from one year to the next, whether an award might go to a stylised Korean thriller, an understated, humanistic Iranian work, a gritty Malayalam narrative or even a well-made song-and-dance Hindi movie. And if that sounds too messy, chaotic and capricious, well, that’s what real diversity is about.