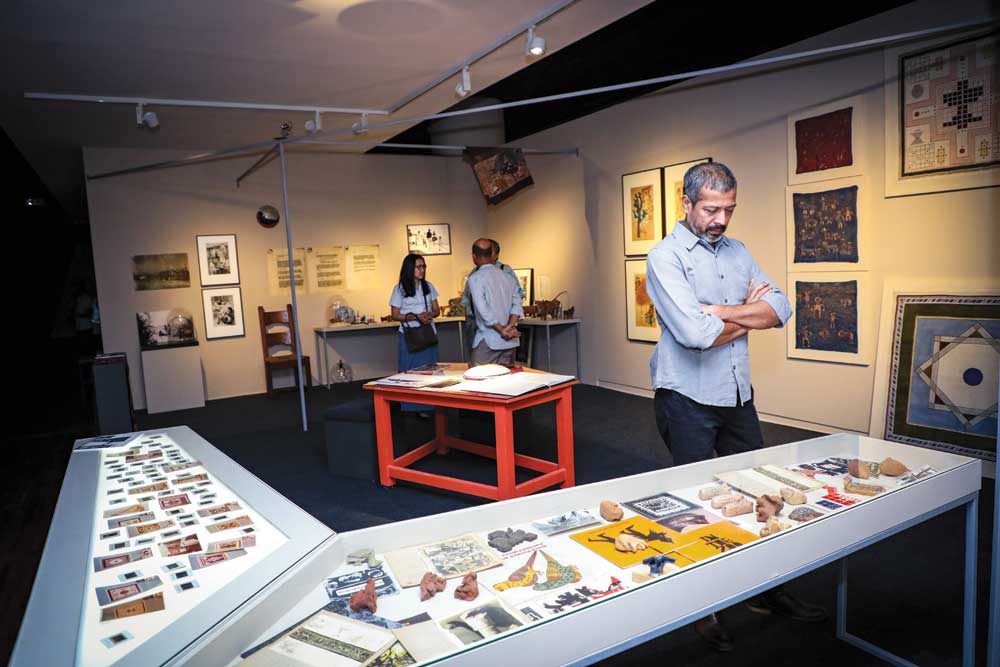 TO CULTIVATE BONSAI, one must have a studied understanding of botanical anatomy as well as a proclivity towards relative cruelty. What could have been a sprawling tree with unwieldy roots and shade-giving leaves must literally be trimmed to size. Verticality, every tree’s natural predisposition, must be compromised through an intricate process of clamping and trimming with a range of delicate machinery, so it can be reduced to its miniature version. The very process of growth must be inverted. Bonsai, the Japanese pronunciation of the Chinese-origin penzai, implies treating a tree as if it were a laboratory experiment, controlling every manifestation in a container-like setting, thus indelibly implicating the hand of the gardener.

Unlike even landscaping, which is also undertaken for similarly aesthetic, non-utility-based reasons and for the presumed pleasure it allows scope for in urban, concrete realities, the bonsai gardener is akin to an artist working with material, controlling the organic spurting of leaves and root for the sake of form and alleged beauty. Like a Zen garden, the functionality of bonsai is not bound to any yield of fruit or vegetable. Instead, it is meant to enable a spirit of reflection for the passer-by. Despite its translatability as a consumable experience, it remains a self-indulgent art. And despite the poetry of it, despite every justification of the genre, violence is inherent in its very structure, which accounts for the somewhat unsettling feeling viewers often experience upon wandering into a bonsai garden, where the human, but of course, is larger in size than its botanical counterparts.

Intriguingly, Akansha Rastogi describes the curatorial consequence of Hangar for the Passerby, her ambitious ongoing exhibition at Kiran Nadar Museum of Art’s Noida space, as imitating the growth of a bonsai, which can be read either as a paradoxical or ironic statement, or poetic, depending entirely on the spectrum of your relationship with bonsai. Intended to showcase “the wide-ranging creative output of more than 45 artist groups, collectives, cooperatives; contexts and individuals, covering a vast geographical and historical span between artists and art institutions from the 1930s to 2017,” Rastogi, who has, for at least three to four years, perhaps longer, been avidly researching the exhibition history of post-Independent India, brings to the fore the many sub-plots and non-mainstream dialogues that have shaped the trajectory of what we acknowledge today as the history of modern and contemporary Indian art. In her own words, the exhibition “accumulates and stirs up various durations, events and formats of working together, scenarios and phrases.” In an endeavour to visually complete her chosen metaphor, Rastogi even places a bonsai at the base of a fabricated wooden structure in one section of the exhibition that maps a tree-planting movement in Santiniketan. It could have been a clever manoeuvre, except, given that the form the exhibition assumes is the opposite of well curtailed, minimal or miniature, the prescription for the successfully cultivated bonsai, the presence of this potted plant seems like overreaching.

The exhibition’s primary setback is not one of content, for there is no dearth of material, both archival and artistic. There are moments when viewers may even be compelled to feel like they’re passing through the landscape of an over-eager art historian’s wet dream. There are catalogues, cinematic footage, photographs, notes, asides, sculptures, paintings, blueprints, documents, even a so-called souvenir shop, a transliteration of an idea originally proposed by the short-lived Group 1890 that was never realised. One senses that Hangar for the Passerby is a manifestation of Rastogi’s extensive historiography of exhibition and art-making in India spanning the 1930s to present day. One can argue that the exhibition focuses on the “collective” nature of that historiography. But the problem is in the unstructured, amorphous manner of this manifestation. Instead of honing in on plot points, even allowing a narrative to emerge, Rastogi offers the viewer sites for confusion, in a sense reducing each of the exhibits (many of which are highly compelling) to citations. What seems to be continually missing is the generosity of context, which makes this a show for art world insiders. The rest must contend with absent captions, guesswork, and the resulting anxiety of alienation.

The hyper abundance of videos creates a sense of over-saturation and fatigue, doing discredit to brilliant individual pieces

To be fair, one can see the attempt at a narrative strategy; an indulgent layering of documents from different time zones of production. Laminated pages from Rajeev Sethi’s Doing More With Less, an illustrative study of the existing use of space at Shadipur, a makeshift village on the outskirts of Delhi that’s home to the Bhule Bisre Kalakar (forgotten and neglected artists) run parallel to black-and-white photographs by Ram Rahman that offer glimpses of less disenfranchised artists such as photographer Raghubir Singh, singer Shubha Mudgal and poet Kaifi Azmi. They may be scenes from some SAHMAT (Safdar Hashmi Memorial Trust) gathering, but, given the lack of any captioning, who and what they’ve recorded can only be corroborated by actually asking either Rahman or Rastogi, neither of whom are immediately accessible to the non-art world visitor.

A similar pang of more than mild irritation beseeched this viewer when she was forced, in a way, to match a stack of photographic prints of Richard Bartholomew’s documentation of the Indian art world from the 1950s to the early 1980s with the vinyl captions that were placed at least 30 meters away from it, and at least 200 meters away from the projection on hung cloth of the same images. As someone who has actually worked on the late art critic’s posthumously published art criticism, this seemed an inconsiderate gesture, as was placing one of his images, featuring a group of artists including MF Husain, in the souvenir shop between a cluster of black-and-white photographs by Jyoti Bhatt, whose signature at the bottom is the only way of identifying him as their author.

The only caption in that section of the souvenir shop mentioned sketchbooks by Gagan Singh, which are a delight to peruse, filled as they are with the illustrated exploits of his eccentric Sardar that traipse philosophical questions through Singh’s unique sense of humour. The layering process begins from the exhibition’s entrance, with a collaged floor print echoing the disembodied sculptures strewn around; fractured limbs, fallen busts, terracotta shards, skeletal casts, all constituting the College Backyard, credited to Partha Sarah Behera, Barun Behera, Jyoti Panjana, Sujit Kumar Seth, with Paribartana Mohanty, reappears within the enclosed space in the exhibition, with no ostensible function except to reiterate the curator’s intervention. The strategy reaches its apogee with the parallel display of Pablo Bartholomew’s photographs of artists hanging out or partying in the 1970s and 1980s, and Arnika Ahldag and Amitesh Grover’s series of images that recorded through CCTV footage placards with a singular word in an office-like space, creating, through a cluster, a poetic sentence. This arrangement does great disservice to both bodies of work, especially since some of Bartholomew’s photos are being unearthed for public viewing for the first time, and again, one has to dance a little to co-relate the densely packed images with the captions that are relegated to a margin. Rastogi, in fact, keeps dodging around with your eye level; most distinctly with the brief display of postcard-sized images from the Sarai Reader #9 exhibition curated by Raqs Media Collective at Devi Art Foundation rendering them difficult to read. The hyper- abundance of video works creates a sense of over-saturation and fatigue, doing discredit to some brilliant individual pieces.

There are fairly strict prescriptions for the presentation of bonsai. When done right, a bonsai must look so effortless it should seem as though someone just dropped a miniature tree into a pot. There must be no trace of wiring, no sign of pruning and certainly no apparent evidence of the scarring artistry responsible for its cultivation. Sadly, Hangar for the Passerby seems more like bonsai gone wild, which therefore can no longer stake claim to being bonsai. There is too much of the curator’s intent and not enough of its manifestation, rendering much of the display esoteric and indulgent. The space, intended for reflection, is filled with well-meaning curatorial noise. Moreover, the category of the passerby, for whom this exhibition is meant to be a hangar, one presumes, becomes problematic, given that even the literate, so-called art cognoscenti could easily get lost in the maze of un-contextualised name dropping and uncaptioned work. Some enthusiastic passersby may feel inclined to occupy the mind space of an amateur sleuth in an attempt to decode the great mystery of why a particular collective came to be and what its relevance was within that moment of its being, or what constitutes its afterlife. The reluctant passerby may mistake the invisible gates as prohibiting structures, preferring not to trespass at all.

(Hangar for the Passerby runs at Kiran Nadar Museum of Art, Noida, till November 15th 2017)