Who Says We Can Move On? 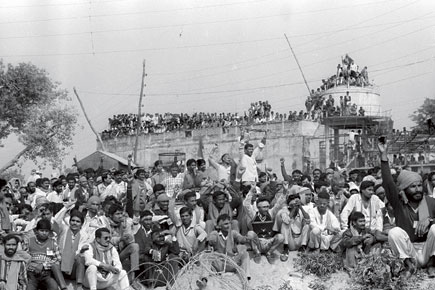 
On the evening of the Ayodhya judgment, there was no shortage of political pundits flaunting their secular credentials even as they hailed the verdict. They pointed to how the country had reacted in the aftermath as proof not only of the country’s maturity, but of the soundness of the judgment. Yet, there was no reason to believe the country would have reacted otherwise whatever the nature of judgment. The country has indeed matured in the years since 1992, but that maturity says nothing about the soundness of the judgment.

Missing from the TV studios that day were the voices of Muslims who felt wounded by the judgment. From Bhopal to Gorakhpur, the Muslim friends I spoke to—educated, moderate and middle class—were left aghast by the verdict. (The political impact of such resentment is bound to follow, as the accompanying story suggests.) A friend remarked that not only were TV anchors speaking with much glibness and little information on how Muslims were reacting, they even had the temerity to suggest how Muslims ought to be reacting.

It was no surprise that these pundits reached a consensus suggesting it was time for the country to look beyond Ayodhya. But what gave them this right? The only people who had the right to say we can move on were precisely those victimised by the criminality of the 1992 Babri Masjid demolition and subsequent riots, and these were the very people missing from the studios. The pundits argued that the criminal case was proceeding separately in any case and should not be confused with this verdict, but they missed pointing out an obvious fact. Even if the criminal case finally ends in punishment for the guilty, it will mean very little, because what the accused sought in Ayodhya has been achieved—their arguments have been given a stamp of judicial sanctity.

The Allahabad High Court judgment of 30 September chose to emphasise two suppositions that can never be proven—that the Babri Masjid stood at the exact spot where Rama is believed to have been born indeterminate millennia ago and that it was built by demolishing a temple some five centuries ago—over two illegal acts clearly witnessed and documented in Independent India: the installation of idols under the mosque’s central dome by stealth in 1949 and its demolition in 1992. This judgment would not have been possible without these two criminal acts that the Indian state failed to prevent.

In letting the ‘belief’ of a large number prevail over the only facts that can stand the test of verification, the court gave judicial approval to the Sangh Parivar rhetoric that led to the 1992 demolition. In effect, an argument of faith in favour of the majority prevailed over the facts that a minority could marshal.

By this logic, the demon of majoritarianism, a polite word for the rule of the mob, would prevail in every such situation of conflict, for what evidence could ever counter the faith of the majority?

In thus privileging belief over evidence, in preferring faith over fact, the judgment calls into question the idea of plurality that distinguishes India not just from Pakistan, but also from Israel, the idea that no community takes precedence over another on mere grounds of faith. This is a principle enshrined in our Constitution, and it is this principle that enjoins my loyalty to the Indian state.

In the Sangh Parivar’s view, there is a dominant strand of history that we must pay allegiance to, a strand that imposes a belief in the destruction of a temple by Babar in the sixteenth century and enjoins all of us to participate in the historical righting of this wrong. In my view of India, such an idea has no place. For me, an Indian can lay claim to many varied and often opposing strands of history; what eventually matters is how we negotiate our shared contemporary history.

If this were not so, the Sangh Parivar could ask me as a Sikh to apologise for the sacking of Delhi during the 1857 uprising, someone else may call upon Marathas to make amends for the massacres of Bhils in the nineteenth century. In the context of my views in a constitutional state, this past is irrelevant. What matters is how we have dealt with our shared past since 1947. For this very reason, a judgment that gives legal precedence to what may or may not have happened almost 500 years ago over what did happen after Independence in 1949 and 1992 strikes at the very root of this idea.

In doing so, the judgment in principal reinforces what has been the Indian state’s failure in practice to ensure justice in the face of the mob. The two biggest such failures are the massacre of Sikhs in much of the country in 1984, and the Babri Masjid demolition in 1992 with its subsequent fallout that led to a massacre of Muslims in Gujarat in 2002. In both cases, justice so far has been elusive.

Far too often, I have heard it said that it is time for Sikhs to look beyond 1984, to move on. Far too often, I have heard this said by people in comfortable drawing rooms who had nothing at stake. What did they ever have to move on from? What ever gave them the right to say such a thing? Today, the same people are saying it is time to move on beyond Ayodhya. But how were these people affected by Ayodhya? How were they victimised? What did they have at stake that they are so free with such unsolicited advice? You can only move on once justice is done.

The TV studios on that day went on to introduce another pernicious idea—that what happens or had in Ayodhya does not matter to the young of this country. But again, who were these ‘young’ they were talking about? They were not the young of Gorakhpur, or Faizabad, or Old Delhi.

If the young at shopping malls in Delhi or Mumbai cannot engage with these questions or do not register the importance of these issues, so much the worse for them. It is something to be bemoaned rather than praised, because it suggests they would be equally happy strolling through a mall in Pakistan or Israel, countries where faith arms one community over another.

If indeed these are the young we have produced since 1992, a generation that cannot comprehend what is at stake, then that is no reason to celebrate.