Who Is Secular in This Country?

Those who make religious distinctions or those who do not? 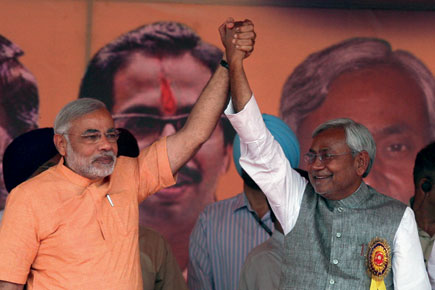 Those who make religious distinctions or those who do not?


A fierce debate rages in the Indian media over who is secular, with two extreme points represented by a couple of chief ministers— CM of Bihar Nitish Kumar and CM of Gujarat Narendra Modi.

This debate is uncalled for, to my mind, because no individual is secular unless he is an atheist. Charvaka of ancient times and Karl Marx of the modern age may be cited as two prominent examples of secular human beings, since ‘secular’ means ‘of or pertaining to this-worldly things; not related to other-worldly things or any religion or spirituality or superhuman power—Parmatma, God or Allah.’

“As long as you are alive, enjoy your life,” Charvaka said, “You can incur heavy debt, but lead a lavish life. Is your body, once burnt on the pyre, going to come back?” His exact words are:

Marx called religion the ‘opium of the masses’. But a vast majority of people believe in the existence of God, spirituality and other-worldly entities like heaven and hell.

Who else is secular? Can Sonia Gandhi be called a secular person? She is a Roman Catholic. I don’t know whether she regularly attends church or not, but she had once taken a holy bath at the sacred confluence of the Ganga and Yamuna at a kumbh mela. Also, on an election tour, she visited a temple in Gujarat. Can Maharashtra’s CMs, from Sharad Pawar to Prithviraj Chavan, be called secular? They religiously perform puja of Lord Vitthal at Pandharpur every Ashadh-ekadashi. For that matter, can Lalu Prasad be called secular with the interest he takes in Chhat puja? The point is, most of us are non-secular.

Then what is ‘secular’? A political system and/or state can be. I even assert that the State has to be secular. A non-secular or theocratic state is a perversity, a contradiction in terms. In India, this has been the case since ancient days. It is not a concept borrowed from the British, even if the Western definition had its origin in the separation of Church and State that began in 16th century Europe.

King Harshvardhan’s 11th century rule was secular; a Sanatani Vedic Hindu, he honoured Jain and Buddhist saints as well. Even Shivaji’s rule later was secular. After 1947, India could proclaim itself a secular state because Hindus are in a majority here, unlike Pakistan.

India did not turn secular in 1976 when Indira Gandhi unnecessarily pinned the word to the Preamble of the Constitution. The State already was. Article 14 of that document reads: ‘The State shall not deny to any person equality before the law or the protection of laws within the territory of India.’ Article 15 declares: ‘The State shall not discriminate against any citizen on the grounds only of religion, race, caste, sex, place of birth or any of them.’

Mrs Gandhi’s 42nd amendment, if not redundant, only restates the obvious. In Hindu political ideology, the State has to be secular because its functions are limited to worldly affairs.

That brings us to the recent Nitish-

versus-Modi episode. Why did Nitish raise the issue of a ‘secular’ Prime Minister at this juncture? The Lok Sabha election is two years away. There are many other polls before that, so why is Nitish in such haste? If Bihar’s CM wants to sever his party’s ties with the NDA, he can do so any time. His party has chalked out a separate plan for the Presidential poll anyway. If he entertains prime ministerial ambitions, he is free to aspire to that post. He is also free to amuse himself with his personal opinions of Narendra Modi. But why pressure the BJP to declare its PM candidate right now? And why should the BJP oblige him?

If Nitish can ask for a secular PM, why can’t the Sarsanghchalak of the RSS ask that the next PM be a devotee of Hindutva? He will surely guarantee that his statecraft will be genuinely secular, not like what is in practice today, where a distinction is made between one religion and the other.

The practice of pseudo-secularism has been rampant in our country. In the Shah Bano case, the Rajiv Gandhi Government amended the Constitution to appease the Muslim orthodoxy. Is this secularism? The Constitutional directive for the enactment of a common civil code has also been left in abeyance. Then, take the recent shameless attempt to give Muslims 4.5 per cent reservation from the OBC quota. Should this be lauded as secular statecraft?

To proclaim a polity that makes a difference between religions as ‘secular’ and dismiss as ‘communal’ those who propound that no discrimination be done on the basis of religion is nothing short of intellectual adultery.