Where the Mind Is with Fear 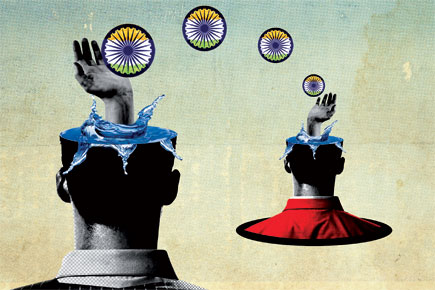 Modern India is old enough now to be blasé about its birthday. Frankly, if I were editing a magazine, I’d dispense with the idea of Independence Day ‘special issues’ altogether. Fifty years is fine; a seventy-fifth anniversary is comprehensible. But marking the 68th birthday of a heavyweight nation would seem to be a commemorative stretch. At what point in our history do we start taking a free India for granted?

That said, it sometimes helps—and almost never hurts—to ask what we mean by a free India. At the sovereign level—now banal but once exhilarating—we’re irrefutably independent. Nothing can change that. Pakistan may nuke us, the Chinese may invade us, but we will emerge from either calamity a little more ravaged than we are now, yet still free. This country will never again be another’s colony. This isn’t as trite as it sounds, for at no other time in Indian history have Indians (or the people who came to be defined as Indian) been able to make that assertion.

The more pressing question to ask is: How free are Indians in Free India? And here we have reason to pause, to cease to be smug. We’re not as free as we should be, or should want to be. (Not wanting to be freer than we are is an old Indian failing.) Our freedoms as citizens are hopelessly compromised by our laws, our law-enforcement agencies, our judiciary, our bureaucrats and our politicians. Just about the only freedom that has not been compromised is the freedom to vote for the government of our choice.

Our one cast-iron boast at the time of Independence was that we were the world’s most populous democracy. That remains unchanged today: We are a formal, diligent, punctilious ballot- box-democracy. We hold elections on time, every time, and are rightly proud of them. They are fair if occasionally turbulent affairs, and remarkably smoothly conducted in a land that is, in every other respect, a logistical nightmare. If only we ran our bureaucracy, our industry, our transport, our food distribution, our shipping, our education, our health care, our police, and our environment as efficiently as we run our elections, we’d be up there with the best of them.

In every aspect of modern political citizenship, India is deficient and only partially free, and sometimes rather more unfree than free. Our speech can be curbed for a myriad of reasons that wouldn’t pass muster in the more tolerant democracies of the West, as can our right to gather and assemble, to associate and to proselytise. How can you describe as ‘free’ a land where you can’t walk up to anyone on the street and attempt to persuade him—assuming he’s willing to listen—that he change his religion from his to yours? How do you describe as ‘free’ a land where a man’s religion is not his business alone, but, instead, the business of any number of self-appointed guardians of social welfare who are empowered (in ways legal and extra-legal) by the Government?

Half-literate lawyers like Kamlesh Vaswani can resort to Public Interest Litigation—in so many ways a curse on the land for which we must, in turn, curse Justice Krishna Iyer—that seeks to curb what we can watch in the privacy of our homes. Vaswani’s inane, busybody assertions that porn leads to rape were embraced by a government whose nannying inclinations are seldom suppressed, and whose Hindu-paternalist vision of Indian society and morality is at serious odds with any objective definition of individual liberty. It’s not just pornography (which was invented in ancient India more uncontestably than the aeroplane); works of scholarship are torn off bookshelves by censor-mobs and cultural vigilantes. And always, the state lets them get their way.

India’s moth-eaten commitment to personal liberty can be seen in its criminalisation of homosexuality, for which Indian apologists continue, without the slightest twitch of irony, to resort to laws enacted by our erstwhile colonial masters. Some of us ask for reparations from Britain even as we continue to subdue our own people with laws that the British themselves have abolished in their own land. And while we’re on the subject of Britain, let us acknowledge that we are scarcely in their league when it comes to democracy and self-determination. The Scots wanted to separate, and they got a referendum to resolve the matter by vote. If, God forbid, a part of India wishes to separate—or self-determine— it gets the Armed Forces Special Powers Act, which empowers soldiers to shoot first and ask questions later, and, having shot and killed, to be spared the ineffable tedium of accountability to a civilian court of law.

India is independent, but its citizens are far from satisfactorily free. Theirs is a quasi-freedom that should depress them profoundly. One-hundred and five years ago, Rabindranath Tagore composed a poem that every school-going child (in my day at least) had to learn by heart: ‘Chitto Jetha Bhoyshunyo’, ‘Where the Mind is Without Fear… and the head is held high/ Where knowledge is free…Where the clear stream of reason has not lost its way…’

I have adapted the poem to fit the state of contemporary India. In doing so, I’m not ascribing blame exclusively to the present Government. Far from it: how much original damage can be done to freedom in the space of 15 months? Our political and cultural freedoms began to be eroded from the day we became free. There is no government in modern India that has not sought to curb its citizens, and that has not believed that it is a better judge of what is good for India’s citizens than India’s citizens themselves.

My adaptation, with apologies to Gurudev:

Where the mind is with fear and the head rarely held high
Where knowledge isn’t free
Where the country has been broken up into fragments
By narrow domestic walls
Where words seldom come out from the depth of truth
Where tireless mediocrity stretches its arms towards imperfection
Where the clear stream of reason has lost its way
Into the dreary desert sand of dead habit
Where the mind is abandoned (though not by thee)
Into ever-narrowing thought and action
From that limbo of unfreedom, my Father, let my country awake.