When Everything Is Okay

On Navaratri. And memories 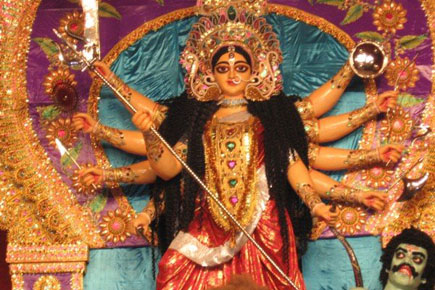 On Navaratri. And memories


I am so out of the loop these days. It was only the sudden rush on sabudaana at Las Viegas supermarket that alerted me that Durga is coming to town. Here in Goa, where the festival of Ganesh the Son is celebrated with full fanfare, the ten days of devotion to his mom are barely noticed. I have been distracted lately, some intense personal stuff. This is my only excuse for not even knowing it was Navaratri.

In my first years in India, before I turned back into a monotheistic member of the bourgeoisie, I had the privilege of celebrating Navaratri in some pretty funky ways, often involving mixed herbs and certain secretive behaviours by the women of a village. Once, in Kinnaur, I was treated to a cup of bittersweet brew; upon drinking half, it became clear that everything always has been and always would be okay. (Upon drinking all, I realised that I, and all women present, had grown ten strong arms.)

Back in my country, I had been part of a revolutionary fringe, a renegade goddess devotee, in love with the juicy, empowering concept of God as Mother. I even had my own figurine, an honest to goodness, 2,500-year-old archaeologically unearthed Canaanite goddess by the name of Tihamat. I used to hold her (she fit right in my palm), imagining the woman who lovingly crafted her from clay all those years ago, possibly in my own backyard. An ancient sister!

A rebel rouser at the time, I took her with me to a special session at the Israeli parliament, where I was asked to speak about the connection between feminism and environmentalism (eco-feminism). I made the bold decision to place my figurine on the podium while I spoke (something I now regret, by the way, I think it was extremely disrespectful of the deep anti-idol feelings of most MPs). My plan was that if anyone started to shout, or throw shoes at me, I would just remove her from the podium and carry on. I was very nervous. I set her down and began my talk, resplendent in a new green-and-gold gown. The bizarre thing is that no one noticed her. I don’t know if there was an invisible science fictionish protective field around her, or if after all these millennia of zealous avoidance, they just could not recognise what was before their eyes.

My favourite Navaratri must have been when I stayed in Jawalaji, in the Kangra valley. An eternal flame has been burning here (according to believers) on the very spot where the tongue of Goddess Sati fell to the ground, many aeons ago. I arrived in the late afternoon, dusty and exhilarated, but found that during Navaratri, the Goddess’ main festival, only men are allowed to sleep in the main ashram.

Well, my feminist self had a hard time hanging on to my reverential surrender to the ancient ways of the mystics. I am afraid I made a bit of a spectacle of myself, hotly debating this with one of the most humourless yogis I have ever met. Isn’t it bogus, I said, to worship a female deity while this lovely female representation of the divine (me) was being pushed out into the cold? (I knew about seven words of Hindi at the time, and have no idea how I managed). The other guys stood around, many cheering me on—at least I think that’s what they were doing. I held my ground.

In the end, a compromise was reached. I was allowed to say the evening prayers with my yogi brothers before I was booted out (most yogis are barefooted, so my metaphor, although appropriately dramatic, does lack authenticity). A toothless yogi with mile-long dreadlocks showed me to a small side ashram, below the main temple. It was only me and the mice that night, and my sleep was deep and restful. I woke to a rose and violet sunrise, as the temple bells announced the coming of a new day.

Today, I will make some sabudaana and maybe rustle up some mixed herbs. Some of that bittersweet special brew would be great too; it might help me remember my ten strong arms, and that everything always has been, and always will be, okay.