When Even Horror Fails

The Peshawar school massacre will not change Pakistani policy 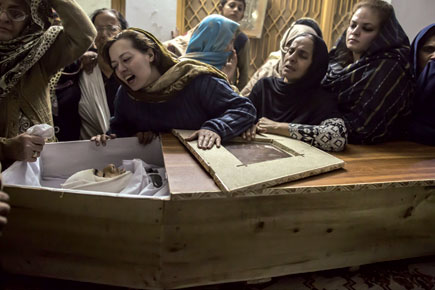 The Peshawar school massacre will not change Pakistani policy

The 16 December slaughter of 132 children in an Army Public School in Peshawar by Taliban suicide bombers is a tragedy over which every soul has cried. In Pakistan, parents prepared coffins for their children. In India, school children mourned. Next morning, the Gulf News carried a one-word headline on its front page: ‘Cowards’. It was meant to describe the Taliban, but it equally applies to the Pakistan military and its Inter-Services Intelligence (ISI).

Hours after the massacre, Asim Bajwa, the Pakistani military spokesman, vowed action against the Tehreek-e-Taliban Pakistan (TTP) in Afghanistan, warning: “We are determined that howsoever it is possible… the [Taliban] leadership will not remain safe there.” Pakistan Army chief General Raheel Sharif, accompanied by ISI chief Lieutenant General Rizwan Akhtar, rushed to Kabul where he asked the Afghan government to hand over TTP chief Maulana Fazlullah or Pakistan would pursue a policy of hot pursuit.

After an All-Parties Conference, Prime Minister Nawaz Sharif pledged to eliminate jihadists, clarifying that Pakistan would no longer differentiate between the ‘good’ and ‘bad’ Taliban— that is, those who serve Pakistan’s interests and those who do not. Meanwhile, TTP spokesman Muhammad Umar Khorasani justified the carnage, saying the school was targeted because Pakistani soldiers needed to feel what the Taliban’s mothers and sisters felt during the Zarb-e-Azb operation in North Waziristan.

Optimists say the tragedy could herald a seismic shift in Pakistan’s policy of using jihadists, and Islamabad and Delhi could jointly obliterate terrorism. In fact, the Pakistani military is capable of eliminating the jihadist terrorism unilaterally, but it will not act. Given the statements from its military and political leaders, Pakistan appears determined to counter jihadism. But the ISI, which creates, nurtures and protects jihadist groups, has recently done everything to the contrary.

In June, before it launched the Zarb-e-Azb operation, the army allowed Haqqani Network militants to escape. In September, it co-opted Punjabi Taliban chief Asmatullah Muawiya, who agreed to a ceasefire against Pakistan but vowed to work with the Haqqani Network, described as the ISI’s “veritable arm” by US Admiral Mike Mullen in 2011. Recently, the ISI has been shaping Pakistan’s narrative. Its influence remains strong. In September, Bilawal Zardari Bhutto had roared: “I will take back Kashmir, all of it.” It organised a failed ‘million march’ of Kashmiris in London. It got General Pervez Musharraf, on whose watch the Kargil war and 26/11 were planned, to launch an anti-India invective. Musharraf proclaimed that Pakistan needed to ‘incite’ those fighting in Kashmir.

Meanwhile, the Sharif government was hammered by protests led by Imran Khan and Maulana Tahirul Qadri and engineered by former ISI chief Shuja Pasha. Seeing his government on the verge of collapse, Sharif surrendered. Tariq Fatemi, assistant to the Prime Minister on Foreign Affairs, appeared, saying: “Kashmir is the cornerstone of Pakistan’s foreign policy. It always has been and always will be.” Sartaj Aziz, advisor to the Prime Minister on National Security and Foreign Affairs, spoke loudly: “Militants not dangerous to Pakistan should not be targeted.”

Sharif too spoke: “Pakistan will speak with Kashmiri leaders before it enters into dialogue with India.” He also did the ISI a few favours: he appointed Maleeha Lodhi, an ISI favourite, as Pakistan’s envoy to the UN and ran special trains for the 4-5 December rally of Lashkar-e-Toiba founder Hafiz Saeed in Lahore, where he urged jihad against non-Muslims.

The reality: while the army fights jihadists in Pakistan’s tribal region, it protects them in Muzaffarabad, Muridke, Bahawalpur and Rawalpindi. It shields Taliban leader Mullah Omar, just as it did Osama bin Laden. Some say the ISI is ambivalent towards jihadists; conversely, it is clear about them. Pakistan doesn’t need to kill thousands of militants, it needs to eliminate two dozen jihadists like Hafiz Saeed, Syed Salahuddin, Masood Azhar, Abdul Aziz, among others.

The ISI tasted blood in the 1980s. Its chief Ashfaq Kayani, later the army chief, doubled salaries to the Hizbul Mujahideen, Lashkar-e-Toiba and Jaish-e-Muhammad after they were symbolically banned under US pressure. It is Pakistani terror that bludgeons Afghans, Indians and Pakistanis. Cowards learn nothing from tragedies. The Afghan Taliban, which bombed a school in Kabul on 11 December on the ISI’s behalf, condemned the Peshawar school massacre. There will be no paradigm shift. The Peshawar slaughter is not the first.