What women want from Narendra Modi 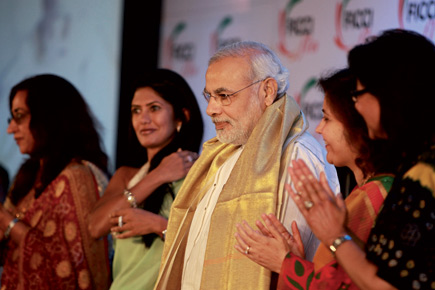 India’s women got compared and excluded in the General Election—among themselves and then from the rest.

As Prime Minister-designate Narendra Modi prepares to take oath on 26 May, men have compared men with men and men have proposed men who will lead the country. Since 16 May, when the results were declared, not a day has passed without people assuming and asserting that the key portfolios of Finance, Home, Defence and Commerce will be assigned to men. Delhi-based intellectuals and economists, opinion makers and thought leaders have turned blue in the face telling anybody who cares to listen why the Governor of the Reserve Bank is a good man, implying some special quality unknown to others, why Arun Shourie can be trusted but Rajnath Singh can’t, and why efforts have to be made to pacify Jaswant Singh because he is so dignified and LK Advani because he is a patriarch.

What is frustratingly familiar is that it is a small and petrified group of people in New Delhi—men and women—who stand exposed. How long will this game of dumb-charades, this performance of Kabuki, continue?

Marxists-Leninists will say one thing, capitalists another, but together they have failed to see that they are far too old fashioned to even be relevant, let alone recognise their patronising and blatant sexism. In the run-up to the polls, there were campaigns about ‘49 per cent’ counting to change the face of India. That’s the proportion of women in a country that counts 1.2 billion but forgets to count what counts for the country’s women when power has to be shared. And finally when it does trickle down, it assumes the form of a dole, a charity, a quarter given to humour women, many of whom accept it without wisdom or foresight. The new Lok Sabha has 66 women out of a total of 543. That’s about one woman for every year that India has been independent.

So what is it? Rosy the Riveter who ran the arms and ammunition factories in the United States during the wars and was sent back to the kitchen after the war ended? Or Kupamma patty, a young widow in south India who held a gun to a British collector’s head at the turn of the 19th century because he ganged up with men in the village to divert water from her paddy fields and whose story is untold? Is it Rosa Luxembourg of Poland who didn’t get the Nobel prize or Nirbhaya of New Delhi who got a fund?

Nothing should ever be handed over to anyone, not least political power. It must be earned every day, especially the right to lead. Institutionalised concessions are crutches. They break under the weight of genuine ambition.

Covering Indian elections as a reporter after a gap, I was struck by how soon it can all regress, how fragile any success is, especially for women. I was reminded of a conversation at Stanford with the late anthropologist Michelle Zimbalist Rosaldo. She had argued in a book she co-edited in 1973 that an emphasis on a woman’s maternal role played to a universal opposition between ‘domestic’ and ‘public’ roles that are necessarily asymmetrical. Women confined to the domestic sphere, she said, do not have access to the prestige and cultural values that are the prerogative of men. The exercise of power by women is often seen as illegitimate and the avenues by which women gain prestige and a sense of value are shaped by their association with the domestic world. If the frame is skewed, so will the form and the enquiry.

Having lived and worked in two continents and been educated in a third, I see a striking uniformity and repetitiveness of issues related to women. Rare is the country where the full scope and implications of a labour market that accepts women not just as co-workers but also as child-bearers is truly integral to its democratic comprehension. The Scandinavian countries remain a model, but adopting that model or comparing what happens there to India would be an exercise as grotesque as the reverse. Simply stated, the labour market has not recognised that a woman’s output includes children.

The power-brokers in this election were men and a Jayalalithaa or a Mamata or a Mayawati were often portrayed as whimsical and unpredictable primarily because their method of work and terms of reference was not the accepted comparer-excluder model but one they had developed on their own, complete with inconsistencies and sometimes even incoherence. Their rise to power is seen more as a phenomenon, something out of the ordinary, which it is, but not necessarily one that challenges the core principles of their sustained success and assimilation. They are viewed as dictators, their powers illegitimate in a society which lives in three centuries claiming a stake in the fourth.

All that is only partially relevant because even in political parties led by women in India, women are not nurtured and mentored to attain positions of leadership. A woman is given an electoral ticket as a token, as a celebration, as a cost.

When women raise questions that in the past have been taken for granted or ignored, it is placed in a bracket labelled ‘reservation’, to which caste calculations are systematically added without questioning. Vague theories are foisted. Sadly, the question of women and their role in political and social life is informed exclusively by one section of Indian society that considers itself ‘progressive and open-minded’—which, translated, means looking elsewhere, especially towards the West for wisdom and guidance.

In such a scenario, every unorthodox win or surge is derided as a flash. A challenge is defined as extreme good or extreme evil because the excluders know that extremes will, by definition, disappear.

The election campaign has exposed India’s wounds. Leaving an understanding of that opportunity to self-seekers who have done nothing much this past week other than complain and quarrel would be an enormous waste of an opportunity that has come our way. People have rushed in to say how women should be empowered and educated. For them, nothing, not even the language, must be allowed to change. Many of the proposers and comparers may wither away if they encounter the disruptive part of truth and genuine dialogue that may hold the germ of an idea for women in India.

Expose, engage and ensure. Expose the problem for what it is, so roadblocks are seen for what they are. Engage all, especially the blockers, to find solutions. Ensure that adequate funds and resources are channelled to where it matters most. In a country where over 600 million people are hungry and disease is rampant, the challenge seems evident.

Whatever you do, don’t tell women what to do.

Engage with sincerity and humility, not an agenda or a voters’ list. That kind of engagement will enable change in ways nobody could have imagined. Meaningfully engaged women are a society, a culture and a political path. Women are survivors—enable them as people, not as cooperative societies. They will give you the roadmap that will heal and construct, combine and grow.

If you go to the same people all the time, you will get the same answers, often negative ones and even more often new problems disguised as questions.

Election 2014 has pushed India to stand up and be counted. Wasting this opportunity—any opportunity—would be tantamount to failure. National failure.

Chitra Subramaniam
Chitra Subramaniam is an award-winning journalist best known for her Bofors investigations. She is currently editor-in-chief of the current affairs portal, Thenewsminute.com, and divides her time between Geneva and Bangalore