What Is Past Is Provocation

The lamentation of Romila Thapar, our most venerable historian, is understandable: philistines have come to dominate the political space. The age of the philosopher king is gone; today it is all about spin and sound bites. 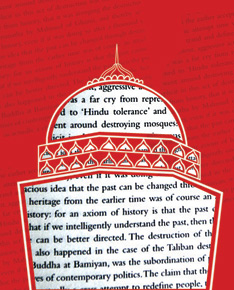 The lamentation of Romila Thapar, our most venerable historian, is understandable: philistines have come to dominate the political space.

There are two kinds of yesterday in politics. One is perfumed memory. Here an exaggerated sense of greatness prevails. Its best—or worst—expressions are found when a faith is in power. When gods, springing up from misread scriptures, take control of men’s actions in the ghettoes of dispossession and anger. Such upsurges, mostly staged in ‘secular’ (what a profanity!) dictatorships, uniformed or otherwise, are invariably immortalised as revolutions, and they usually come accessorised by the adjective of a religion. We have been there before, the alternative of the Book. It was an alternative that found the present an evil imposed. It found in the freedoms of men the footprints of the devil. So, in its search for the sacred idyll, it banished—or executed—the wayward children who strayed from the edicts of the divine.

Then there is the other yesterday: the past as a Great Hurt. Here the back pages of national biographies are entirely about vandalised civilisations and displaced gods. About lost empires and the invader’s bloodlust. It is this kind of yesterday that drives nationalist alternatives to the extreme. Aren’t we familiar? We have seen charioteers racing through the anger and agony of the believers. When the foot soldiers of religious nationalism brought down the dome of the invader’s faith, it was an act of simulated rage that sought to restore a wounded god. Here too, the memories of yesterday result in the horror of the present. And they all require a convenient bogeyman to legitimise the terror; so it could be the invader or the infidel. These two versions of yesterday differ only in details; both are the creations of men who prefer mythology to history. They are expressions of power, and power for men swayed by the fantasies of lost empires and damaged deities requires a rewriting of the present and mythification of the past.

These two versions are a historian’s worst scenario. Writes Romila Thapar in her new collection of essays, The Past as Present: Forging Contemporary Identities Through History (Aleph): ‘If those who constitute both the political leadership as well as the rank and file of political parties today took the trouble to read, they might begin to understand that serious historical interpretation is not just a game of adopting this or that ‘…ism’, but of attempting to use a method of analysis in interpreting the past. Gone are the days that one could talk intelligently about history to a Nehru or a Maulana Azad. They are not made like that any more.’

The lamentation of Thapar, our most venerable historian, is understandable: philistines have come to dominate the political space. The age of the philosopher king is gone; today it is all about spin and sound bites. Thapar is particularly provoked by the attempts of the BJP government (1999 to 2004) to ‘silence historians’. She means historians such as herself, making sense of our past with a Leftist perspective. In her view, the Right wanted fairytales. They wanted to terminate the ‘intellectual efflorescence’ that was there till the barbarians stormed the salons. And the trigger, she argues, was the destruction of the Babri Masjid.

You may not be able to disagree with Thapar when she says that ‘the past cannot be changed, but if we intelligently understand the past, then the present and the future can be better directed.’ For a long time in this country, history writing was an analytical enterprise on the Left side of the argument. To be precise, there was no other side; the Establishment of Ideas was linear and Leftist. Under the sheltering shadow of Nehru and later of Indira Gandhi, it grew in size as well as in influence. There was hardly any voice from this Establishment of the Mind questioning the perversions and pathologies unfolding in the distant fatherland of the Indian Left. They romanced the lie, and the argument became increasingly dogmatic and didactic—and history became the profession of pedagogues. They monopolised the argument, and, it must be said, there was no counter-argument, not even a bad one.

When there was some sort of a counter-argument, the so- called homespun argument, it sounded less sophisticated, and more cottage industry. The alternative historians who found a voice during the BJP regime were no match for the seasoned rhetoricians from the bastions of Leftist discourse. Such historical service to the nation only added to the ire of historians such as Thapar. The citadels of thought were challenged, no matter how clumsy—and at times unsustainable— the challenge was. The Right perspective in India, a country so conditioned by the ponderous Left, remains underdeveloped. Exceptions are caricatured and attacked by the righteous legion from the other side, the dominant side. That is why we are in a country where you can be an admirer of Pol Pot or Stalin or Mao and be a thinking humanist, but you just can’t endorse the One Whose Name Cannot be Spoken. And that is why history in India is not storytelling but an analysed position— and our influential historians are not a Fernand Braudel or Simon Schama. What is past is prologue, says Antonio in The Tempest. For us it’s provocation.