How dearly everyone wanted the Black Caps to win. But Australians don’t care 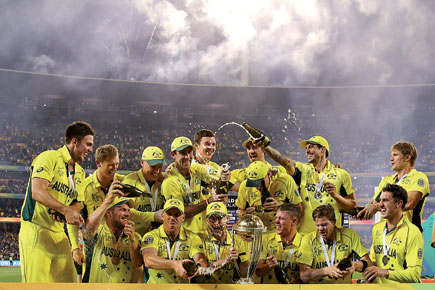 “The least popular World Cup-winning side ever?” asked a friend of mine on Facebook within hours of Australia’s cussed demonstration in Melbourne that the Kiwi is a flightless bird. The semi-private debate that ensued did not dispute the unloved nature of Michael Clarke’s men. Instead, it devolved into one about whether Clarke’s Australians—winners of the cricket World Cup of 2015—were even less popular than the deeply unpopular Australian sides that had won the cup in 2003 and 2007, or even in 1999. Australians, we concluded, are the least loved cricket team in the world. (The ‘we’ in question was a loosely knit group of Indian and British cricket fans in their early fifties, all old enough to have tracked the tournament with ardour and pedantry since its inception in 1975. In our distaste for Australia, we were not outliers.)

The only time the Australians have won the World Cup to popular satisfaction was in 1987, when Allan Border’s men, improbable Aussie underdogs, beat England in Calcutta. The Eden Gardens cauldron had heaved for the Antipodeans, and not just because England had defeated India in the semi-finals. Australia were deep in the doldrums, a mighty team that had been laid low for almost a decade; and the sight of captain Border pulling his team to victory—an ordinary-looking team whose whole was much greater than the sum of its fractions— was emotional to behold. Australian and British scribes had also, I recall, detected more than a whiff of anti-colonialism in the Calcutta crowd that day. The year, 1987, was only four decades after Independence, and 100,000 ‘excitable Bengalis’ found it very easy to throw in their lot with the Aussies against India’s (and Australia’s) erstwhile overlords.

A colonial shadow no longer hangs over cricket. Cricket teams are judged, and cheered for, by their cricketing ability, their on-field aura, and the broader narrative that accompanies their path to the final. When asking which World Cup winners have also been the sentimental favourites, it is worth noting that the last indisputably popular winners across the cricket world were the Sri Lankans in 1996. In that year, Arjuna Ranatunga and his band of merry, tubby men brought a new brand of audacity to the art of one-day cricket. Their victory was also ‘payback’ for the boycott, by Western teams fearful of civil unrest, of the Sri Lankan leg of that year’s tournament.

In truth, the Sri Lankan win in 1996 was the last time the world rejoiced over the outcome of a final. It was a watershed: every preceding final had thrown up a result that was met with approval; and every final after 1996 resulted in a win that was celebrated less enthusiastically, if at all.

In 1975 and 1979—the cup’s first two editions—the West Indies were feted without restraint. They were the darlings of world cricket: athletic, skilful, and unbeatable, they played a game that was clean-limbed and clean-spirited. They didn’t ‘sledge’: in fact, that accursed Australian euphemism for on-field abuse wasn’t even part of the game’s vocabulary. I think it helped aesthetically that cricket was then still played in whites, for the Afro-Caribbean players looked particularly dashing. By 1983, however, cricket had tired somewhat of the West Indies’ supremacy, and of the use by their bowlers of the short, intimidatory ball. Cricket was ripe for a popularity coup; and India obliged, winning the final at Lord’s in what is still, in my opinion, the greatest upset in a match of significance in the history of the game. (India were 66-1 outsiders at the start of the tournament.)

In 1987 we had the Australian win in Calcutta, followed, in 1992, by Pakistan’s famously ‘cornered tigers’ roaring to triumph over a bland and plebeian England side. That final in Melbourne was cricket’s own Clash of Civilisations, a memorable game in which inventiveness routed the textbook. And so it was, too, in 1996, with the Lankans, before we had, for the first time, winners whom the world accepted as the best but did not even attempt to love.

Those were the Australians of 1999, Steve Waugh’s scrappy, yappy fighters, with culturally unlovely men like Waugh himself and Glenn McGrath, not to mention Warne, bleach-blonde and blue-collar, and Darren Lehmann, the current Aussie coach, who was once banned for five games for calling Sri Lankan players “black cunts”. Under Ricky Ponting in 2003, and again in 2007, the Aussies were the same: hard, unyielding, foul- mouthed, as contemptuous of their opponents as they were cocksure of themselves. It should be said that a part of the dislike of the Australians by fans from the rest of the world was the ease with which they won.

And yet, there was no grace in their victory, no magnanimity, no ease of spirit. The one ‘gentleman’ in their side, Adam Gilchrist, blotted his Bible in the eyes of his opponents by his unorthodox methods in the 2007 final against Sri Lanka: he stuffed a squash ball inside his batting glove to get a better grip, smashing a century along the way. Was this fair? One can only say that it was thought not to be so by many because an Australian had resorted to the device.

India won in 2011, and their victory, while the stuff of dreams at home, was met with a muted reaction elsewhere. This was not because the players had behaved badly, or resorted to Aussie- style combativeness on the field. On the contrary, in spite of the presence in the side of louts like Sreesanth and (to an extent) Harbhajan, the team was largely dignified, with Tendulkar present as elder statesman and totem. What the world couldn’t stomach was a triumph for the Board of Control for Cricket in India, the insufferable BCCI, which, by this time, had come to rule world cricket with a truly gaudy hand.

And so the trend of unpopular wins continues with Australia’s demolition of New Zealand. How dearly everyone wanted the Black Caps to win. How disappointed we were when they were skittled out for 183. Forlornly, we took solace in the fact that India, too, had scored just 183 when they beat the vaunted West Indies. It soon became apparent that Australia couldn’t lose—that Australia wouldn’t lose. They are hard men, hard-hearted men, who don’t care what the rest of the world thinks.

They don’t give a damn if they aren’t loved.