×
A Bend in the Ganges

There’s No Silence Louder than Rahul in Benares

The enigma that is Rahul Gandhi has proved too inscrutable for the people of Benares. No one has a word to say about him, not even a harsh word 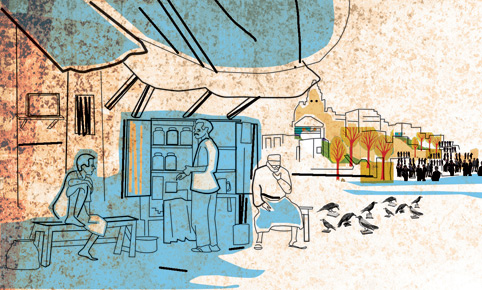 The enigma that is Rahul Gandhi has proved too inscrutable for the people of Benares.

First—before I get into how and why I ended up in Benares—I must give you, in order of appearance, the fixtures at Pappu’s chai shop. Which, this election season, is part salon, part TV studio, part pure political theatre. More can be known from this configuration of characters about the mood and dynamic of the present election than any amount of hours spent in Delhi’s drawing rooms. And, here is a general observation: unlike Delhi—where I have a standing bet with Barkha Dutt that Modi will not even be the BJP’s prime ministerial candidate, let alone prime minister; or, where the editor of a major paper was saying till only last year that Modi would not win a single seat outside Gujarat—the people of Benares like to be right about politics, rather than correct or wishful. And, at Pappu’s shop, they have been acquainted for some time now with certain truths that they are genuinely surprised it has taken others so long to figure out: 1) they are—and have eternally been—the centre of the world, and 2) Narendra Modi is going to be India’s next Prime Minister.

But, first: the characters who, once darkness falls and the roar and smokiness of evening in small-town India merge into each other, assemble in this open-air theatre of three wooden benches, their surface smooth with use. There is Dr Subehdar Singh, a burly, grim-faced mountain of a man, with thick lips and a broad expanse of white stubble. He is a socialist and lifelong SP politician, and from his unhappy countenance it is possible to sense the thrashing the Yadavs are to receive in the approaching election. There is Dr RP Singh, a feral and watchful former museum curator at Benares Hindu University. He is prone to theatrics and whispered confidences. Once a socialist and SP man himself, he seems to have plumped firmly now on the side of Modi, and when Subehdar Singh is not listening, he will say furtively to me: “The SP has prostituted itself. And let me tell you, they’re very smart, this BJP bunch. At just the right moment they abandoned this rubbish about mosques and temples. They know young people don’t give a toss about these things. They want the best hospitals and malls and roads; that is what this election is about.” Then there is Ashok Pandey, the BJP pravakta. A jowly man with crooked teeth and impish globy eyes. He has known the aforementioned bunch all his life—three generations, in fact—and though he tries not to seem triumphalist, sometimes, especially when the TV reporter from Shri News arrives, he can’t help himself. Then flaring his eyes, and alluding to the fact that there are four members of Mulayam Singh Yadav’s family standing in this election, he cracks his favourite joke: “Lohia used to say ‘All the party’s workers are my family’. Mulayam says ‘My family is the party’.”And then there is—how could I forget him!— Badri Vishal, the comic poet, with a single tooth, like a rapper, turned blackish-red from paan. He runs an agency on the side that helps people get passports and PAN cards. Which is just as well: because Badri Vishal, the truth be told, is not all that funny. Not professionally funny, at least. He did make one nice remark, though. In a heated conversation about outsiders coming to contest from Benares, he said: “So, what’s the big deal? Everyone here is from outside. Ninety per cent of the population are outsiders. Even Bhole Nath was an outsider. He moved from the Himalayas and came to live here, didn’t he?” Nice one, Badri Vishal! These are the main players. The supporting cast includes: two morose Brahmins who will occasionally become animated; a bank manager who gives them a hard time: saavan ke andhe hariyali hi hariyali dekhte hain; and, a large, very dark Muslim poet—a “sadak chhaap”of a poet, if RP Singh is to be trusted—with a white beard, who is strategically cagey about which way his community will go in the election. This question—of which way the Muslim vote will go, and here Kejriwal and gang stand a better chance than they perhaps know themselves— constitutes one of the silences, the known unknowns, in what has come to feel like an election of silences. Of negative spaces and things left unsaid.

And of these, no silence is louder than the one that has fallen over Rahul Gandhi. For, if something seems missing from my list above, if somewhere we sense an absence more substantial than a presence, it is because such an omission has indeed been made. The Congress party is not merely wounded, not merely low in spirits or down on its luck, a little anaemic, it simply does not exist. That for so long there was no Congress candidate from Benares—there is one now: a popular local man, Ajay Rai—is significant only in that nobody here had taken any notice of the fact. For a while Priyanka’s name was being bandied about—and Subehdar Singh conceded this would make some difference to the contest, but then he quickly added: “Congress abhi Priyanka ki bali chadhaane ke liye taiyyar nahin hai. Jab Rahul bilqul flop ho jaayega, tab voh aage aayegi.’

Jab Rahul bilqul flop ho jaayega! This was—I swear!—the only time his name came up. Yes: the enigma that is Rahul Gandhi has proved too inscrutable for the people of Benares. No one speaks of him; no one mentions his name; no one has a word to say about him, not even a harsh word. Now this might seem unsurprising to some—that a member of the Gandhi family should step forward, should offer himself before the public, and the public, like a child refusing some final morsel of its dinner, should turn away in cold disdain— but for someone, as myself, born in 1980, whose first complete sentence was ‘Indira Gandhi hai hai’, and whose first memory of a prime minister was of Rajiv Gandhi, this represents an astounding fact. An astounding change in the political consciousness of our country.

And for this—for this mountain of what Dr Freud considered to be the third of the opposites ‘loving’ admits, namely indifference— I will offer one simple explanation: the aam aadmi, as Rahul Gandhi envisions him, has ceased to exist. The man of my childhood (even more so of his), of leathery skin and bad teeth, who, with yellowing eyes, full of faith and fatalism, looked to some member of the Gandhi family as his saviour, has ceased to exist. Or, if he does exist, he can no longer swing an election. He is no longer the voter. There has been—and this is why people have thrown the khairat the Congress has put on offer back in its face—a middle-classification of people’s mindsets. India’s voters now come from that happy conjunction of denim, phone and television. That is not to say that people are no longer poor; some are very poor, much poorer than they ought to be; but they don’t sound like poor people. They sound, even in some of the poorest parts of Bihar and Poorvanchal, like middle-class people with not enough money. And when middle-class people do not have enough money, they do not accept the fact with grace or equanimity; they get angry. Very angry. And it is to this anger that Modi—and, it must be confessed, Kejriwal too—has been able to speak directly. Not Rahul. He—like Arundhati Roy, that other prophetess of the picturesque poor—is ever in search of that man who, with dead worshipful eyes, will look to him as his benefactor. And he might well find him in some tribal pocket of India. But this man is no longer representative. He might at a pinch win him the chief ministership of Jharkhand—and this is a job our sepoy prince, after this election, would do well not to disdain—but he cannot make him Prime Minister of India.

I will say further that the extinction of this man—and his mentality—who the Gandhi family has nurtured so lovingly as the most captive of all voters, will, when it comes, be a welcome change. Because the anger of the new electorate this election, so nakedly visible among young people, is an electrifying and wonderful thing.

PS: In my rush to give you the news from Benares, I forgot to tell you why I’m here. Never mind. Next time. I’m here for a while…

Aatish Taseer’s new novel, The Way Things Were, will be published at the end of this year. His weekly despatch from Benares will appear through the elections