The Tiger, The Tusker And a Forest Guard

Watching her from our elephant-back vantage, there was a peace that was starting to descend on that wretched Dhikala chaur. The chital went back to their grass. The elephant breathed slowly, then slower, and then no more. The tigers of Corbett had claimed their largest victim yet 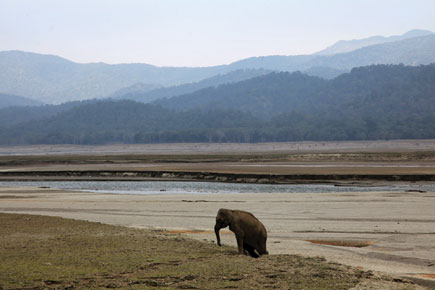 She was in pain, dipping her trunk into the Ramganga seeking solace from the ice cold waters. As she saw us, astride her own kin, approaching broadside, she squealed and wobbled towards us. For a moment I thought she was about to charge, but only a moment. She was distressed, hobbled and as she wheeled around we saw the extent of the wounds. The tiger had got her on her left hind leg, severing the Achilles’ heel with the precision of a surgeon cutting up a cadaver. The heel now hung from the leg like a rag, separated from the shank by a blood soaked gulf of torn tissue. She screamed again and the elephant we were on hesitated. The mahout wanted a closer look and rapped the animal smartly on the temple with an iron ankush, the dull drumbeat on the temple adding to the general elephantine anguish in the air. Our elephant swung away once again, not wanting to approach the young one closely, for she was young, the wild one. Twelve. Thirteen. Hard to pinpoint, but an early teen. She would have been singled out from the herd by the tiger. Perhaps she had wandered off towards the forest fringe a little more than she should have. Perhaps she was lagging behind a long line of pachyderms as they wound their way away from the chaur into the forests at dusk. We would never know the details of the encounter. But it would have been swift, for the tiger had only got the single bite in. There were two more claw marks on the trunk, possibly as she swerved around to rid herself of the predator. And then the herd would have moved in. Their shrill trumpets would have rent the evening air as a dozen or more of them took on the tiger, with the passion and fury of a matriarch-led family closing in on their child in danger. The tiger would have snarled once, twice and then slunk off as the dust of the pachyderms enveloped him. He would return later, for in his nature he knew that the kin could not carry a crippled child for long. For how long did the family tarry? When did they know that their protection had come too late, that the child could no longer keep up with them? For how long did they coax her up, beseeching her to move with the herd? When did they know that it was futile to be with her and that for the safety of the herd, they had to move on? What a scene that farewell would have been! And here she was now, seeking the safety of the Ramganga which she had swum downstream to reach us, and then seeking help from an unknown fellow pachyderm. Little did she know that the lady we rode was hamstrung as well, not by the fatal bite of a natural foe but by the cold chains that held her captive, the colder commands that bid her to do her duty and the centuries of tradition that bound her to her human masters.

Besides me, the director of the park seemed relieved. “I am happy that it was a tiger,” Samir said. He was an old wildlife hand. “It could have been a snare and seeing her from afar I could never be sure. We had to check, didn’t we?” We had spent an hour with her and now we wheeled back to Dhikala watching over our shoulders as she came slowly after us for a while and then aimlessly towards a small chital herd. Aack. Aackaaack. The chital were in panic now. The alarms they were unleashing were usually meant for a tiger, but there was no tiger in sight. The deer bunched up and looked the young elephant in its eye Aack. Aackaaack. She moved away from the herd too. What were the deer wary of? Why were they calling, their natural predator alarm, when a wounded elephant was approaching them? Could they smell the tiger on her? Did they sense that the end was near? All three of us were in a quandary now. Samir, the mahout and I. What was the best course of action? Treat the elephant? Take her in to captivity? Her chances of survival were bleak with a leg torn off. Were we to play God and deprive the tiger of his catch? Or were we to let nature take its course? “If we put two of our elephants by her side, she will get solace.” The mahout knew his elephants. As we talked, she lay down on her side. Facing the blue waters of the Ramganga, she took her weight off the mangled limb for one last time. Watching her from our elephant-back vantage, there was a peace that was starting to descend on that wretched Dhikala chaur. The chital went back to their grass. The elephant breathed slowly, then slower, and then no more. The tigers of Corbett had claimed their largest victim yet.

Just a month ago, the park had celebrated a record double century. Two hundred and fifteen tigers were estimated by the latest round of counting, more than 190 of them camera-trapped and their identities calibrated by matching stripes. There was no doubt. Corbett had the highest density of tigers in India. It had overtaken Kaziranga to achieve that milestone. It also, possibly, had the largest number in any one area. Sunderbans was the only competitor for that but the numbers of tigers that inhabited the mangrove was always a mystery. Counting them in the never-ending marshes and swamps of Bengal was not an exact science. For now, Corbett was the global record holder. And Samir celebrated by cutting a cake. In fact, he got a young forest guard who was mauled one monsoon ago by a tiger to cut the cake. The guard was luckier than the elephant. He was the last in the line of four guards who were out on patrol at Gairal. As they wound their way through the elephant grass on foot, there was a sudden roar and the tiger struck from behind. This time the animal was beaten back by human hands as his comrades rallied around to shout and throw stones at the animal. A bleeding Jaikishen was then taken, carried first by the guards, then stretchered on a charpoy across the stream beds (for the waters were still high) and then driven by park staff who had gathered to keep. He was not a natural quarry for the tiger. He could not be left for the king to claim. He was a sarkari employee and it was for the sarkar to save him.

As we drove, Samir and I through the Kamarpatti road towards Sarpduli, shafts of early afternoon sun pierced the thick sal canopy. The spotlight on the forest was a perfect time to ponder tiger numbers. Back in 2010 when heads of state met at St Petersburg and called for doubling tiger numbers, I was sceptical. In my speech I addressed two basic points. First the frontline forest guard. It was the guard, the Jaikishens of this world who save the tiger, I recalled. With three bullets in their gun, if they had one, they’d take on the poacher, woodcutter, developmental mafia, the local don and the odd tiger itself. They were the guardians of the wild. They were the ones to be feted and celebrated and looked after. My second observation was whether the world had the habitat left for doubling tiger numbers. India had 1,411 then. Did we have the forests and the prey to support 2,822? I wondered. But I should not have. India is almost there now, the latest count which gave Corbett its double century puts the national tally at 2,226.

A mixed foraging flock of birds overhead interrupted the thought. A racket-tailed drongo flitted through the cackles of a flock of jungle babblers. A tree pie raucously called out its presence. A charm of minivets flitted by, red and gold, singing minuets in the tree tops. A flash of blue broke the scene up as a roller shot from the branches just in front. Images shifted back and forth. The elephant lying on its side, the injured guard stretchered off on a cot. The birds moved away. And I was left thinking if there was anything in this world as too many tigers.

(This is the first of a monthly column on nature)