Clearly, Pawan Kumar Bansal will not jeopardise his political career for the Indian Railways 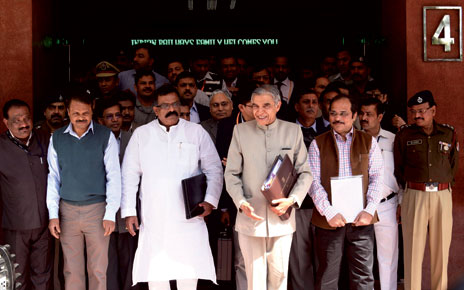 Clearly, Pawan Kumar Bansal will not jeopardise his political career for the Indian Railways


Congressman Pawan Kumar Bansal’s maiden Railway Budget has been described by critics and analysts as unimaginative, and at best an attempt to maintain the status quo while failing to address problems that plague the Railways. The Congress and its allies think that the budget is ‘forward looking’ while the principal opposition party—the Bharatiya Janata Party (BJP)—has called it a ‘Raebareli budget’. The BJP is obviously saying that the Railway Budget aims to appease the Congress leadership: which means Sonia Gandhi, party president, and Rahul Gandhi, her son and the newly appointed party vice-president. For anyone who knows how the Congress functions, and also how the Congress-led United Progressive Alliance government functions, this should not come as a surprise. A Congress minister has presented the Railway Budget after 17 years, and it was bound to reflect the current state of the party, which can best be described as confused.

Also, for a long time now, railway ministers have been seen as addressing their political constituencies—be it by doling out new trains, halts or railway equipment manufacturing units; or by refraining from hiking fares despite an urgent financial need to do so. The last time when a UPA railway minister presented a budget that proposed to hike railway fares to contain the growing losses (March 2012), he lost his job within four days. Dinesh Trivedi, then Union Minister of Railways, had tried to present a budget that earned him the ire of Trinamool Congress chief Mamata Banerjee, whom he had succeeded as railways minister.

But Bansal is not likely to make that mistake. He is more likely to go the extra mile to please his political boss, rather than scuttle his steady ascent within the party. His political constituency is the well-planned and modern city of Chandigarh that is administered by bureaucrats with an abundance of Central Government funds at their disposal. His voters are a mix of the urban middle-class occupants of neatly laid out stretches and the immigrant dwellers of slums that have sprung up in the city.

Bansal’s urban voters did not have to wait for the Railway Budget. He gave them another Shatabdi Express, connecting Chandigarh with New Delhi, within weeks of taking over as Railway Minister. This budget, he has improved their connectivity with Goa, Amritsar and Bangalore. For slumdwellers, he has started a dozen new express trains that connect Chandigarh and its nearby towns to states like Uttar Pradesh, Bihar, Rajasthan and Maharashtra. Several trains from Chandigarh have been extended to Patna and Bhagalpur. And, Chandigarh has been sanctioned a modern signalling equipment factory.

Ever since he entered the electoral fray in 1991, Bansal has had just two political rivals: the BJP’s Satya Pal Jain and former Union Civil Aviation Minister Harmohan Dhawan. Jain defeated Bansal in the 1996 and 1998 Lok Sabha elections, when the BJP’s political star was on the ascendant. However, Jain lost to Bansal in 1999 when the BJP came to power at the Centre. Ever since, Jain has finished a distant second to Bansal in Chandigarh’s electoral race. Dhawan has consistently finished third despite changing parties every election. Bansal was rewarded for this feat in 2004 when he was made a Minister for State in the Finance Ministry. He ascended the ranks slowly, and became Railway Minister last year, rewarded for his loyalty to 10 Janpath and for being non-controversial.

Bansal is no Lalu Prasad. He does not have the rustic wit that leaves his colleagues in the House in splits while presenting a railway budget. Nor is he like Mamata Banerjee, who can chide and outshout opposition MPs while reading out hers. And unlike the two, Bansal’s political ambitions are rather modest. As long as Bansal retains his Chandigarh Lok Sabha constituency, and keeps his boss happy, his political career is safe. His budget speech, and the plans it contains, do not need to put the Railways back on track. As long as he can begin his budget speech by saying “[I] pay my homage to the sacred memory of Shri Rajiv Gandhi who introduced me to the portals of this highest Temple of Indian Democracy”, he knows his politics is chugging along well. The Indian Railways can wait.