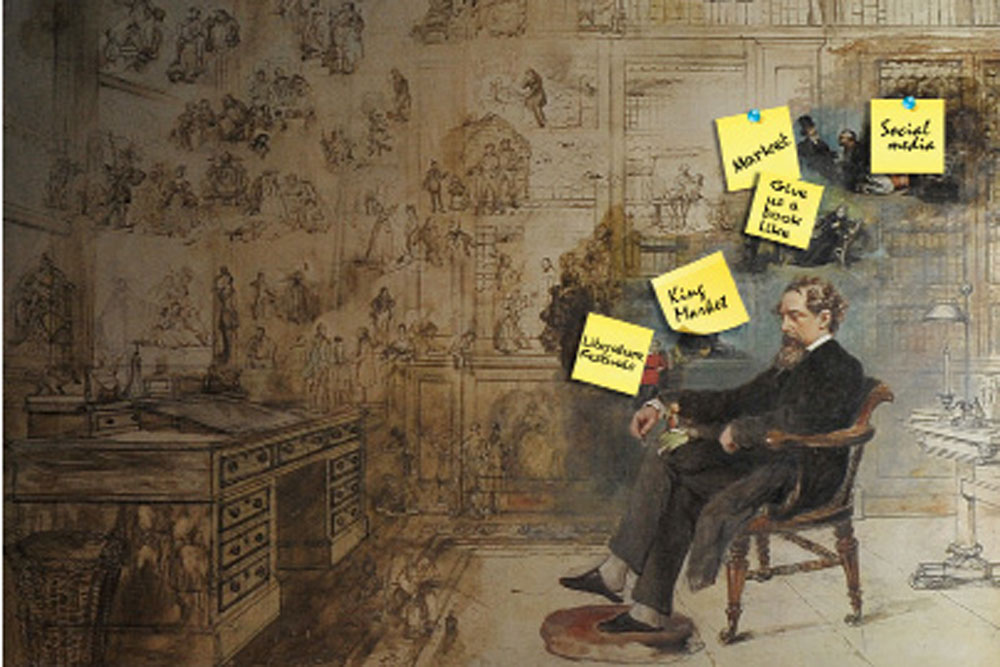 AN ELEGANT WOMAN called on me to discuss a commission she had received from an established publisher. The offer came because the tone of her blogs and the single book she had published struck her agent as a perfect cocktail for a fast-seller on the evolution of the different kinds of English in India. Mildly thrilled, I gratefully swept aside a tedious glossary I’d been struggling with and ordered some coffee. I looked forward to something like The Lie of the Land: English Literary Studies in India by Rajeswari Sunder Rajan, but this time about creative writing.

Within minutes, our discussion hit the sands. I tried to keep us going but as we spoke, I realised with deepening embarrassment that she knew even less than I did about the subject. She hadn’t heard of works that had shaped the field nor even about writers who had influenced critical thinking in it. Both pathos and a hysterical desire to laugh stirred in me because just the day before I had scribbled down what Gibbon wrote about himself, ‘Unprovided with original thinking, unskilled in the arts of composition, I resolved to write a book.’

What depressed me was her publisher’s brief: ‘Give us a book like––––.’ The content of her publisher’s ‘model’ book was serious. Its selling point was that it came wrapped in a deceptively light-hearted style. But the real point, which I didn’t have the heart to tell my visitor, was that unlike her, the writer of the ‘model’ book had a steely grip on his subject. That’s why he’d been able to write a seemingly playful account of it.

Whatever happened to the burning reasons for working on a book? ‘I would sit at my desk at 2 in the morning, unable to sleep, and drink pot after pot of tea and try to write. The panic attacks came then. I would be staring at the screen, examining a paragraph that I had already rewritten 170 times. Suddenly the screen would start to ripple, as if I were peering through water, and I would feel a pain like a punch in the chest. Months passed this way. My chest felt constantly bruised,’ says novelist Akhil Sharma. In Finding the Centre, a book about the magic and process of writing, VS Naipaul says how, when he started to write, he could barely finish a sentence even though he knew he had a story in him. ‘The literary problem was also a personal one… but the experience stayed with me, untouched by words, its references unexplored.’ Or perhaps a script comes into being because like Kamala Das said, words harassed her and would not let her rest? It seems what harasses many writerly folks today is the need to get a publication into their CVs—a stepping stone to the next commission. No wonder the din from the caravan of publishing muffles the lone flute or trumpet worth listening to and from which we might truly benefit.

THE TRAUMA AND POLITICS OF MAKING IT TO A LITFEST ARE ALARMING TO WITNESS CLOSE-UP. JUST AS HUMANS ARE NOT DESIGNED TO SURVIVE IN THE SAHARA, ONE WONDERS WHETHER WRITERS ARE BUILT FOR THE ARENA. AS FAR AS I KNOW, MOST OF THEM PREFER SOLITUDE TO THE BUZZ

FICTION OR NON, what is the origin of a writer’s creativity? What brings on that terrific energy which makes you feel you’ll burst, that surge which many feel but cannot put into words like real writers do? Even Shakespeare wondered ‘Where is fancy bred? Or in the heart or in the head?’ Someone once wrote to MT Vasudevan Nair that he had observed the life and practices of the community of pappadam makers and wanted to write a story about them. “So far, nobody has touched this subject,” he pointed out. Did MT have any advice for him? We do not know what reply he received but “I know very well that no one can teach another person how to write a story, a novel or a poem,” MT said in a lecture, adding that almost anything drops a seed into the writer’s imagination: an unusual face, a conversation overheard, a song remembered.

The other side of the mirror is the post-publication life of a book and its writer. There was a time—not so long ago—when just getting a script accepted by a publisher was very glamorous. The writer celebrated with friends and enemies, and waited to see the work in print. When that brown-paper packet finally arrived, the book was modestly displayed and brought out for visitors to admire, a couple of letters were posted to people who needed to be kept informed. What happened to it thereafter was chiefly the publisher’s worry and if the book saw three reviews in 12 months it was a lot. The perfume of publishing lingered for at least two years and everyone said, “There goes a writer!” about a few—very few—people.

Today, writing a book is a preface to more work. Post-publication stress can make your memories of how you reached the final draft look like fun. Even the most successful writers cannot dream of relaxing but has to invest a lot of time and resources thinking carefully about how to market themselves and their books. There is the added tension of watching bookshop after bookshop close down while an army of bloggers and social media influence-peddlers take the field. Even before the book is formally launched, there is talk about it on Twitter and its powerful cousin Facebook to prod readers in the direction of the eighth wonder of our times: online book buying.

There are two things we need to think about: though Litfests and prizes for books and authors are wonderfully stimulating, I’m certain we all feel great concern when, from a clutch of extremely good books, only one is finally held up for everyone to admire while the rest slip into near darkness. How fair is this? How good can it be for writers, who we know are sensitive? The trauma and politics of making it to a Litfest are really alarming to witness close-up. Just as humans are not designed to survive in the Sahara or to raft up and down the Amazon, one wonders whether writers are built for the arena. As far as I know, most of them prefer solitude to the buzz. The second thing is the sound of King Market pounding on our doors. This force has a disorienting effect on creativity. Even writers who entered the canon years ago are not immune to it and try to step out of their natural habitats in an attempt to dazzle, a dhobi-list in hand of all the burning issues of the day. When they fail and embarrass everyone including themselves, it is the final desertion: the writer from himself.

How did we reach this state in our reading, writing and publishing lives?