The Point of Being Raza

It is easy to be taken in by the decorative elegance of Raza’s work. But once you begin to look beyond the formal beauty of his work, you encounter a stubbornly abstract language, refusing to yield its mysteries 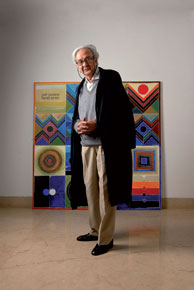 At 93, Syed Haider Raza has just had a solo exhibition, called ‘Aarambh’ (The Beginning), at Vadehra Art Gallery in New Delhi. (Last year he had a show as well, around the same time and at the same venue, titled ‘Parikrama: Around Gandhi’.) If there is a touch of tongue-in-cheek in the choice of the name for his latest body of work, there is also, one must admit, more than a grain of truth in it.

Raza’s life work has revolved around the concept of the ‘bindu’—roughly translated as ‘the point’—which, in several philosophical and spiritual traditions across the world, stands in as an embodiment of The One as well as the Infinite. In that special sense, Raza’s work, too, has a curious circularity built into its foundations—it is hard to tell where his paintings originate, given their repetitious themes and re-appearances. For nearly seven decades, almost all his work has been referring to, or drawing upon, a universe uniquely their own—one that consists of intense colours, geometric shapes, sharp triangles and dizzying spirals, with the occasional word or phrase inscribed across their surfaces.

It is easy to be taken in by the decorative elegance of Raza’s work— he is, arguably, one of the finest and most daring colourists in the history of modern Indian painting. But once you begin to look beyond the formal beauty of his work, you encounter a stubbornly abstract language, refusing to yield its mysteries, sometimes even after repeated, prolonged and attentive viewing. And it is this peculiarly impervious quality, in the seemingly innocent arrangement of grids and concentric circles, which gives Raza’s paintings their self- renewing energy and vitality. The power of his work emanates from his capacity for resilience: the gift of reinventing an idiom that is repetitive and bound by rigorous formalist and intellectual conventions.

When I met him at the opening of his exhibition last year, the 92-year-old spoke of his enduring fascination with Mohandas Karamchand Gandhi. Raza has been re-reading Gandhi’s writings since his return to India in 2010, after spending almost 60 years in Paris, his adopted home. Many of Raza’s later paintings draw on quotes from Gandhi’s tracts or refer to iconic moments in the latter’s life. Hey Ram (2014), for instance, is a direct allusion to the last words Gandhi allegedly spoke as he lay dying, after being shot at by Nathuram Godse. It is a suitably grim composition, full of dusky hues and smoky brushwork, with a touch of red, reminiscent of the colour of dried blood, creeping upon it from a corner. Gandhi’s dying words appear on the canvas in the Devanagari script, dim and fading, like a sigh.

Raza was a young boy when Gandhi had passed in a car through Mandla, the district in Madhya Pradesh where Raza was born. That ‘encounter’—if one could call it that, since Raza did not even manage a glance at the Mahatma—proved to be of primal significance in Raza’s adult consciousness. His education, under teachers who were mostly Hindu and ‘upper caste’ Brahmins, was cosmopolitan. Raza was drawn to the epics and the classical texts, particularly to the Ramayana and the Bhagavad Gita, and the ways of life these spoke of.

In the 50s, Raza travelled to Europe along with fellow artists from the Progressive Artists’ Group in Bombay (now Mumbai)—Francis Newton Souza and Maqbool Fida Husain being the most illustrious among them. In Paris, Raza went on to absorb the tenets of several radical modernist movements in the arts—Cubism, Surrealism, Optical Art, and Expressionism, among others—though, eventually, he went on to forge a language that was uniquely his own.

Even though he was surrounded by the paintings of the masters of 20th century European art, the daily proximity with Picasso or Matisse did not turn Raza away from what he perceived to be the essence of Indian thought. He continued to paint images that were at once pretty and profound, if circumscribed by a somewhat predictable signature style. Just as you would tell a Husain by the iconic horses that the artist painted in profusion, you could tell a Raza by the ubiquitous presence of the bindu.

WITH THE art boom of the 90s, Raza’s paintings, too, started selling for astronomical prices. In 2010 one of his works sold for over Rs 16 crore, a record that has only recently been rivalled by one of VS Gaitonde’s canvases. In the scheme of contemporary art, the estimated value of a work is directly proportional to the genius of the artist who produces it. However, in Raza’s case, that epithet (genius) is apposite not only for the vast body of works he has created; but rather, he also deserves it for the astonishingly long number of years he has been active—and still continues to be at the age of 93. In spite of his fragile health, Raza picks up the paintbrush almost every day, to make work that attests to a mind that remains lucid and agile.

I do not know of any other artist in recent times who has had as long and prolific a run as Raza—except perhaps for the French- born American artist, Louise Bourgeois, who worked till the time of her death at the age of 98 in 2010. In the other arts, there are instances of people who, in defiance of all natural law it would seem, continued to amaze the world with their creativity. Nirad C Chaudhuri wrote his last books as he was touching a century—his mind remained sharp as a razor and his command over diction impeccable. Gangubai Hangal, a legend of Hindustani classical vocal music, was well into her nineties when she gave her last performances, shortly before her death in 2009. Other than a slight tremor in her voice, neither her thunderous timbre nor her capacity for virtuoso singing betrayed any signs of her advanced age.

Inevitably perhaps, a major part of our interest in the phenomenon of genius tends to be tied up with an individual’s ability to transcend the limitations of being human, so to speak, with their ability to conquer the ravages of time and continue producing arresting, unforgettable work.

In one of his last books, cultural theorist Edward Said formulated the notion of a ‘late style’, which, in spite of its inadequacies, remains a cornerstone for understanding ‘the relationship between the bodily condition and aesthetic style,’ as Said put it. Said’s work, which draws heavily on the history of Western classical music, asks a key question: is there a common trait that characterises the last works of all great artists? By closely examining the oeuvres of Beethoven, Mozart and Jean Genet, the French writer, among others, Said concludes that there is, indeed, a thread that connects the late styles of these artistes: ‘intransigence, difficulty, and unresolved contradictions’.

Ironically, Said’s own book, On Late Style: Music and Literature Against the Grain, which he failed to complete before his death from leukaemia in 2003, became a testimony to his own ‘late style’: one that epitomised some of the qualities he identified in the works of his subjects. Yet, the notion of a ‘late style’ is bound to be treacherous, especially when it is associated with the length of life, perhaps the most arbitrary and unpredictable phenomena known to human beings. A theory of lateness will make very different sense in the cases of, say, Beethoven (who lived till 57) and the poet, John Keats (who was dead at 26), both of them having produced outstanding work by those years, respectively.

When we look at the life and legacy of an artist like Raza, whose career spans several decades, yet with very little obvious or discernible development of a style, the idea of ‘lateness’ begins to manifest itself as a challenge. It does not offer a neat set of adjectives to talk about the work—because the difficulty of a style like Raza’s is not germane only to its formal aspects. If in the late works of Louise Bourgeois we are overwhelmed by her visceral passion, we tend to be distinctly underwhelmed by Raza’s late style which radiates serenity and a peace surpassing all understanding. Yet, in the case of Raza’s exquisitely stylised abstractions, the ‘unresolved contradictions’ go back to more fundamental aspects of their making—to a self-consciously historical frame of reference they wish to inhabit. The ‘lateness’ of a style like Raza’s comes through the realisation of it being located ‘in time’—of belonging to, and outliving, a tradition of painting (like Kandinsky’s, for instance) that has had its moment, perhaps irrevocably so.