The Music of Politics

A band with quiet ambition that features a stand-up comic, a Bollywood lyricist and a seasoned alternative musician is like a house of cards waiting to crash. But Aisi Taisi Democracy is a brilliant act you may never have heard of 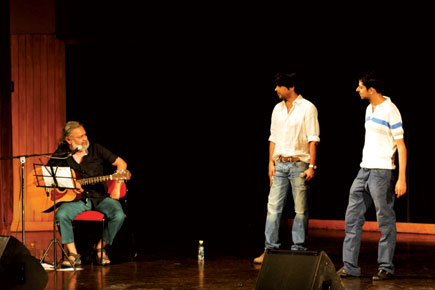 Songs about Babri dolls and Vyapam scams make up the repertoire of the year-old Aisi Taisi Democracy, a band too good to be true. A band with quiet ambition that features a stand-up comic, a Bollywood lyricist and a seasoned alternative musician is like a house of cards waiting to crash. But Aisi Taisi Democracy is an underrated, brilliant act that you may never have heard of. Formed last year, the group is made up of Delhi-band Indian Ocean founder member and bassist Rahul Ram, lyricist and scriptwriter Varun Grover, and Delhi-based stand-up comic Sanjay Rajoura. Their songs mine the wealth of misadventures that have made Indian politicians infamous.

While I’ve never watched Rajoura, I know that Ram is a riot on stage and Grover is currently the toast of the film industry for having scripted Masaan, an evocative film that takes on caste, corruption and gender politics in the country. But they are not given to thumping their chests about their achievements as ‘influencers’, to use a (sickening) digital marketing term, are known to do. Ram wears his PhD from Cornell University lightly. Of course, none of this matters to Buzzfeed readers of listicles. This music isn’t for under-read, under 20-year-olds or for politically apathetic 30-year-olds who misspell four-letter words such as ‘with’ as ‘vit’ because that’s how you shorten words on WhatsApp.

Rajoura, from the video clips that I saw of Aisi Taisi Democracy’s earlier performances, comes across as a sharp wit who doesn’t stoop to swearing all the time to get his laughs. Again, most audiences won’t get what the big deal about swearing on stage is. Ram says, “We swear, but that’s not all that our performances are about.” The three of them transform into the Shakespearian fool on stage, says the singer. “It’s very difficult to get angry when you’re laughing at things. You can just turn around and ask, ‘Can’t you take a joke?’ and that shuts people up.”

Too few Indian bands have looked to politics in their writing. Manipur-based vocalist and songwriter Akhu Chingangbam, also a PhD (in physics from Jamia Millia Islamia in Delhi) has written songs about the violence in his home state and in praise of Irom Sharmila, the Manipuri activist who has been on a hunger strike since 2000 to protest against the Armed Forces Special Powers Act (AFSPA). Chingangbam’s shows have been cancelled at the nth hour because organisers have feared they might upset local government officials or because they had woken up to the fact that he wouldn’t be playing pleasing pop rock songs. In 1999, Mumbai band Pentagram released a song about the Kargil War called The Price of Bullets, and music channels refused to play it back when music TV could have made all the difference. But it isn’t as if the internet was on fire when Rabbi Shergill released his video for Bilqis, a song about “four victims of the state” as the singer put it: Bilkis Bano, Satyendra Dubey, Shanmugam Manjunath and Navleen Kumar. The song has no more than 200,000 views on YouTube (compare that to the 17 million views that a typical Sunny Leone song gets).

There are other setbacks for plucky songwriters. If you speak to an event manager, he’ll tell you that no company will blow its Corporate Social Responsibility budget on bands that make political music. Booze companies would rather place their money on a DJ console. Who would back the show? Tarik, a punk band based in Shillong that recently wrote a song called New Green Thing against BJP President Amit Shah, sounds optimistic. Says the band’s frontman Wanphrang Diengdoh, “There are promoters who still book us for their shows and that’s a sign that there is hope in the music scene in the country.” At the time of going to press, Tarik was plotting a nationwide tour.

Fortunately for Aisi Taisi Democracy, its band manager Dhruv Jagasia, a bear of a man who no organiser dares mess with, is more than capable of landing it gigs. So even while he worries about payments, it plans to tour five cities this September.