The Making of an Oriental Cult 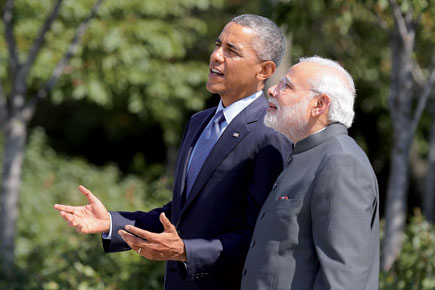 This moment is familiar: walking with folded hands into the frenzied anticipation of others. This is what he has been doing since the day he knew that it would be his lone mission to craft an alternative mythology of his own life. And this is what he will do, no matter wherever he is, to counter all those exaggerations of his own journey painted with darker hues. Everything may have changed when a country, steeped in anger and hope, gave itself to him to be repaired, redeemed, restored. Still, he is walking with folded hands into the minds of believers, as if the evangelism of this campaigner will not be deterred by the powers of office. This time the stage is different, and its symbolism is too obvious to be emphasised. America is where the news cycle is more defining than the spasms of history, where the pursuits and possibilities of dreams are ingrained in national identity, and where arguments about freedom are the largest selling items in the marketplace of ideas. It is the moralism and mannerisms of America that make it an international ideal— and a target of hate. Still, it is a destination most sought after and an aspiration most expressed.

So when Narendra Modi walked with folded hands towards the waiting American guests, the background music provided by the Modi-chanting, placard-waving, Indians, he knew, as he would later admit in one of his best speeches, that few tea sellers would reach this far, unless perhaps you were an American. When in America, play it American, and Modi, a master of stagecraft, needed no reminder. The venue itself was all about pop and performance; it was mostly for mesmerisers and sorcerers of the senses, and here was a politician from a place that in the narrative of oriental kitsch, still sold in parts of the West, was inhabited by performers in some kind of a karmic circus. In his opening sentences, he played with an oriental stereotype to make an appropriate soundbite for such an audience—hence the ‘snake charmer to the mouse charmer’ story. The speech was, in essence, about India as told by an Indian who continues to believe that biography is destiny—and not of just himself. Weaving a narrative with strands of Indianness drawn from history, geography and headlines, he built an idea of India and made himself its most desirable manifestation. When Modi tells a story, the moral of it is always Modi.

As a speaker, Modi is Obama without that authorial detachment—some may even call it emotional detachment. The guest is anecdotal, funny, self-referential and, when the moment comes, confrontational. He begins on a slow note, builds up the tempo, detonates metaphors after those customary pauses to survey the crowd, sermonises, amuses, inspires, and makes it interactive—he knows his Cicero. Obama at his best is part evangelical, part prophetic, part professorial and never intimate or confrontational. In his first victory speech from Grant Park, Chicago, he said, “If there is anyone out there who still doubts America is a place where all things are possible, who still wonders if the dream of founders are alive in our time, who still questions the power of our democracy, tonight is our answer.” That could very well have been Modi in another context. And on the stump, circa 2008, the poetry went like this: “There are no red states and blue states but only the United States of America, there is no conservative America and there is no liberal America but only the United States of America.” Modi too, in the campaign of a lifetime, played the reconciler to perfection. Both, in their own ways, redeemed the oldest promise—and the most unrealised as well—in politics: change.

In biography too, they were from elsewhere—from the far beyond of privilege. As a boy, in the American Embassy’s library in Jakarta, Obama once saw in an old issue of Life magazine the picture of a man whose hands had a ‘strange, unnatural pallor, as if blood had been drawn from the flesh.’ As the boy would later write in his memoirs, Dreams from My Father, ‘There were thousands of people like him (the man in the photograph), black men and women back in America who’d undergo the same treatment in response to advertisements that promised happiness as a white person.’ The boy had ‘no voice for my new found fear’. Forty years later, the boy himself offered, as history stood in awe, a treatment that would change the political complexion of America. Hasn’t Modi too changed the colour and contours of Indian politics? When Obama received Modi in the White House, he was face to face with a man who epitomises the Indian Dream. They share the loftiness of ambition—and a campaign that overcomes the worst instincts of realpolitik. (Still, it must be said that President Obama is a less historic figure than Candidate Obama.)

That said, Modi in America was not about the so-called personal chemistry between leaders or the sweep of partnership. It was all about himself, about a new brand of Asian leadership. Between New York and Washington, it was the gospel according to Asia’s new strongman with the most definitive mandate of democracy, and the good words ranged from the personal to the political, geopolitical to the philosophical, the tonal shift determined by the stage. The Indian diaspora provided the perfect prop; perhaps the enchanted Indian faces brought the best out of him. Unlike Obama, Modi cannot afford to stop the campaigning. Every moment in power for him is a struggle for vindication, and a permanent mode of combat is what keeps him far ahead of his aspiring challengers. The stage has become bigger, and Indians, in spite of being force-fed on anti-Americanism, love watching Americana. The live spectacle starring Modi was the kind of show that would add to the aura of a leader larger than his office. The proverbial union of the largest and the oldest democracies could be a trite media refrain, but the bearded, Hindi-speaking leader from the East, when paired with the über cool Obama, exuded the ancient calm of a savant, the humility of a villager, and the confidence of a fighter who has never tasted defeat. Modi in America borrowed the best of American political theatre and added a dash of oriental kitsch to it.

Modi has always been his own iconographer. And he is sculpting one to perfection—‘Make in India’!—not just for national idolatry but for wider extraterritorial consumption. The maximum leader from this part of the world is usually a paranoid Chinese, and the cult of Modi, a work in progress, is likely to change the leadership hierarchy of the East. Modi’s ongoing conversation with the world provides the first draft of an Indian leader’s vision for himself as the new wise man of the Orient. There is no market better and bigger than America for testing the brand—and, being the scriptwriter of his own destiny, Modi has given us enough intimations of his tomorrow.

The erstwhile home-alone nationalist has launched his global ambition from a place that befits his style.